I am reviewing the Dell Inspiron 13z notebook computer which would be best classed as a “subnotebook”or ultraportable. This would be a step up from the netbook form factor and would suit users who value portability and mainstream specifications. 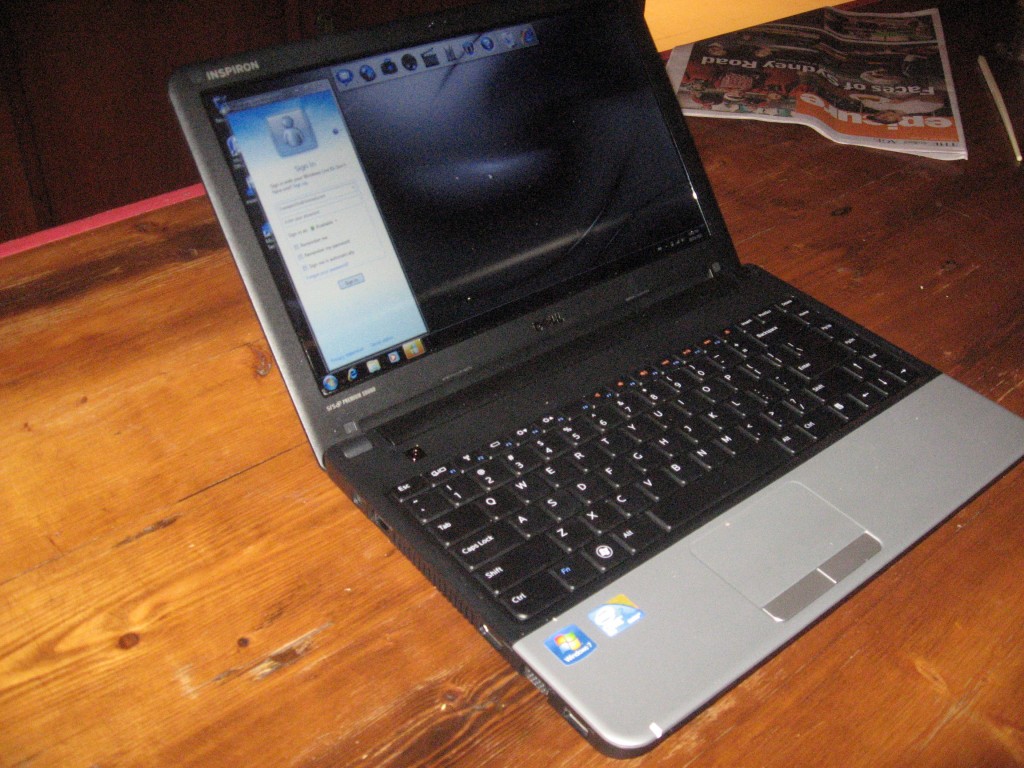 The Inspiron 13z is finished in a similar manner to its current stablemate, the Dell Studio 15 and has that same glossy black lid. But the inside is based on a two-tone styling for the keyboard area with a silver palm-rest area.

This unit is based on an Intel Core Duo U7300 processor and the review sample came with 4Gb RAM and 320Gb hard disk. Unlike the Studio 15, this one had the hard disk partitioned out with a system space of 58.5Gb, a recovery space of 9.76 Gb and the rest as space for the user’s files. There is wireless functionality that can work with Bluetooth peripherals or 802.11g Wi-Fi networks. The model will be available at the Dell store with 500Gb for the hard disk rather than the 320Gb hard disk that is in the review sample.

There is a tray-load DVD burner and an SD card reader for integrated removeable storage. There are 3 USB ports, an audio jack and the ability to connect an external display through either a VGA port or an HDMI audio-video port. It also has, last but not least, an Ethernet port for connection to Ethernet networks or HomePlug powerline networks.

The keyboard has worked well for accuracy especially when you touch-type, although it may appear cramped. The trackpad is very similar to the one that is part of the Dell Studio 15, where the sensitive area is integrated in to the palm rest as a recess and the two buttons being the only thing different from that area. Like all the recent laptops that I reviewed, this unit still requires you to press Fn and the function key to gain access to the function keys.

The screen does well on readability and you can get away with typing for a long time without being uncomfortable. It also work properly with the colour, especially when working with still photographs.

I have done the “DVD run-down”test on the battery which I have done with the other laptops I have reviewed here. This was done with the unit in the default “Dell”power configuration to avoid any power-saving functions cutting in. It was able to play a movie for 1 hour 37 minutes with the wireless function enabled and 10 minutes longer without wireless enabled. It can also run for a significant part of the day on basic tasks without running out of power.

There will always be the problem with limited battery life especially if you work the computer very hard with multimedia, especially games or DVD playback. As well, the wireless-network interface could be able to work with an 802.11n network, but you may have to pay extra for this function. Other than that, there is nothing much to complain about the laptop.

I would recommend this computer for those of us who want a compact laptop computer for travelling with and are likely to make good use of it on our travels. Journalists and similar users would appreciate it being the “right size” for use when taking notes or preparing copy while “in the field”. The generous hard disk and the integrated SD card reader can also be a boon when it is used as a staging post for digital images or as a jukebox for music while you travel.

But I wouldn’t recommend it as a computer for students to use because there isn’t anything to protect it against excessive damage like a hard-disk shock sensor.