Early last year, I had reviewed a Dell Inspiron 13z notebook which was positioned as a consumer-focused “subnotebook” or “ultraportable” computer. This was equipped with a full-sized keyboard and a 13” screen and was optimised for on-road use, especially for creating content while travelling. Now I am reviewing the Toshiba Satellite L730 which is another ultraportable computer that is focused at the same class of consumer users with similar needs.

But this computer is finished in a manner that excels on beauty with its white housing rather than the grey housing that the Dell had and is specified to current needs with Intel Sandy-Bridge processor hardware. 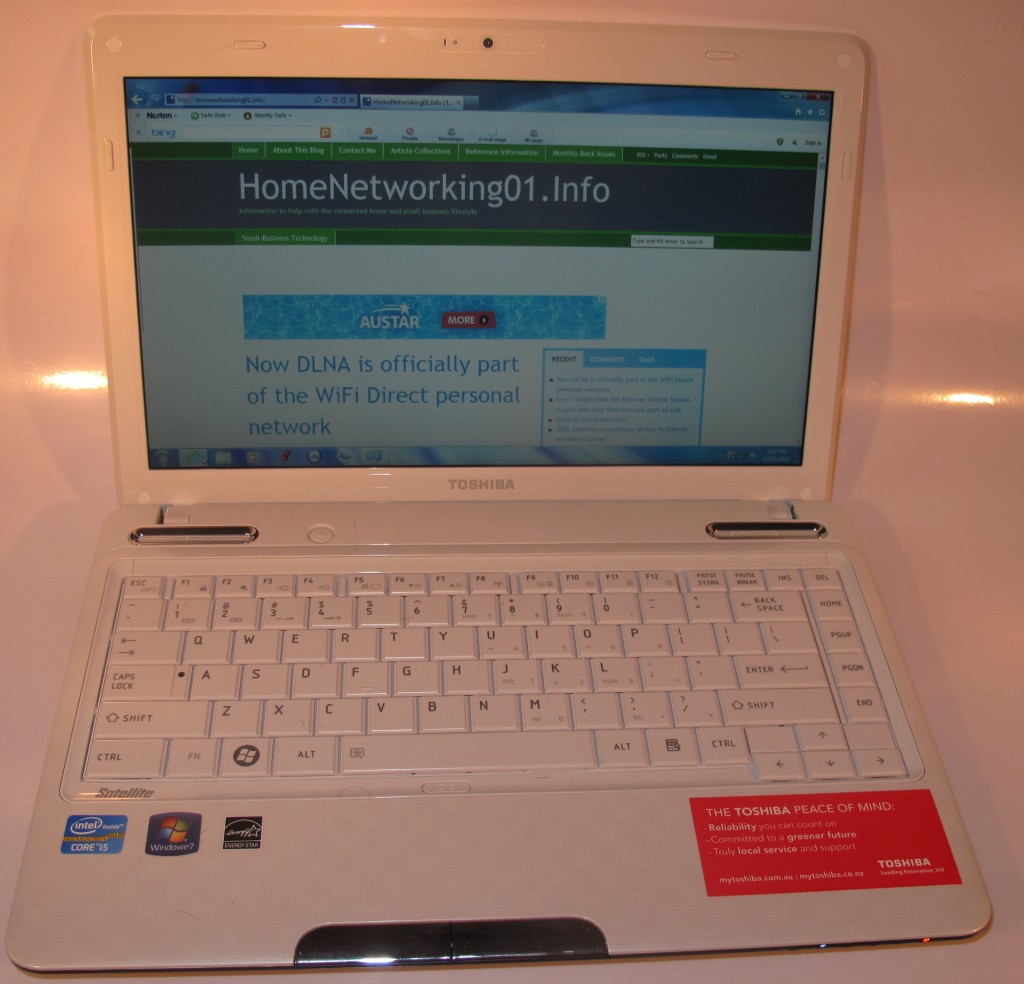 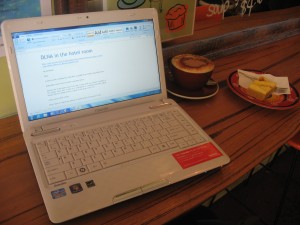 It fits comfortably on that coffee bar at that cafe

The Toshiba Satellite L730 is small and light enough to suit most travelling needs. It can be stuffed in to most shoulder bags and similar luggage without it standing out and doesn’t add much extra weight to the luggage. It is also small enough to comfortably occupy the coffee bar in that cafe or the airline tray table in the economy-class cabin.

This notebook is finished in a gloss-white finish across the lid and keyboard area. In some ways, the white finish may appeal to the “personal-computer” purchasers who want to restyle the unit with various stickers. The speaker grilles are accented in chrome and the underbody is in the usual charcoal finish. It is still a well-built good-quality computer. Preferably, I would go for a darker screen escutcheon in order to make the screen more visible.

The Satellite is equipped with a full-size keyboard which permits you to comfortably touch-type on it. I have noticed that the function keys grouped into clusters of four which makes them easy to find visually and by feel. The keyboard has that smooth glossy surface typical of consumer portable computers and some users my describe it as looking very cheap and nasty. Yet it is still springy enough to allow you to touch-type very quickly and accurately. 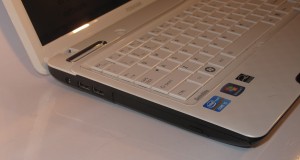 The Satellite L730 is equipped with a similar rough-surface trackpad to what has been used on this computer’s bigger brother, the Satellite L750. This can be hard to find visually but easier to find by feel. There are the chrome selection buttons for “clicking” and “right-clicking” with. It still has the tendency to “jump around” but can be defeated by you pressing a “trackpad defeat” button just under the spacebar.

Like the Toshiba Portege R830, this unit has an integrated DVD burner which is a feature that will become rare for this class of computer, but can be handy if you turn out DVDs of photos or “video rushes”; or simply rent DVDs from video stores for light entertainment while traveling. 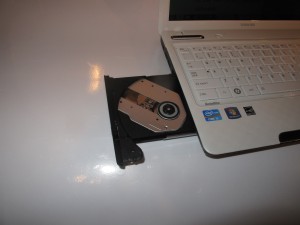 Of course, the Satellite L730 is equipped with an SD card reader for use with your camera cards as well as 3 USB sockets. One of these is a USB 3.0 with that “Sleep and Charge” functionality offered across most of the current Toshiba range, where you can charge your smartphone off the computer’s battery or AC supply while it is off. The SD card reader is infact wedged under the 2 USB sockets on the left hand side of the laptop and this position can be awkward if you are using both USB ports, especially if one is used for a wireless-broadband dongle.

There is the expected audio and video connectivity with a VGA and HDMI socket for external displays and a 3.5mm audio input and output sockets for headphones or external microphones. The Satellite L730 also has expected network abilities with a Gigabit Ethernet socket, 802.11g/m Wi-Fi and Bluetooth 3.0 connectivity.

If you are a travel “pack-rat” or take heaps of pictures and movies with your digital camera, the 640Gb hard disk offers whatever you need for storage. This hard disk is protected by a vibration sensor that parks the read/write heads when it senses vibration or shock as a way of protecting your data. Here, the vibration sensor has come in to its own when I used this Toshiba notebook on a public-transport bus which typically had to pass potholes and go around many corners. You have to make sure that the vibration-sensor warning doesn’t pop up frequently if you don’t want your work interrupted when you are working during that bus ride. 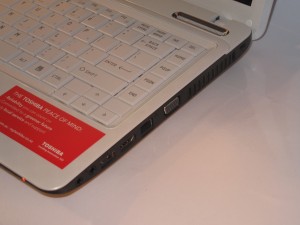 Right-hand-side - VGA, HDMI, USB 3.0 with Sleep And Charge, headphone out, microphone in

The Toshiba Satellite L750 performed very capably with multimedia tasks using the Intel HD graphics. The sound was also very smooth but the speakers, like most laptops, don’t fare well for the sound.

One main limitation that I see for this notebook computer is that the screen is very glossy. This limits its use in bright environments like outdoors on a sunny day, especially if the screen has to be dim in order to extend the computer’s battery runtime.

This particular unit had shown problems with battery runtime where the estimated runtime was less than that shown on the specification sheet. Typically Windows had rated a full-charged battery for around two hours and the DVD rundown test ran for around 1 hour 50 minutes.

This may be specific to the sample unit or the fact that this unit is a review unit that has passed many hands without the battery being allowed to fully charge, but I hope that the production units can work close to the stated five hours.

As I have mentioned before, the glossy screen, along with the white screen bezel, may perturb some users when they travel; and could be replaced with a matte-finish screen.

I would also like to see some more variations in this model such as a cheaper variety with an i3 processor and a hard disk of say 500Gb, which is pitched as an auxiliary portable computer; or a premium unit with an i7 processor and either a solid=state storage, 8Gb RAM or a larger hard disk. As well, members of the series could be finished in the same style as the L750 15” laptop.

Similarly, I would like to see a higher-capacity battery offered as an accessory through Toshiba’s consumer-retail channels so we can run these computers for a long time on the road. 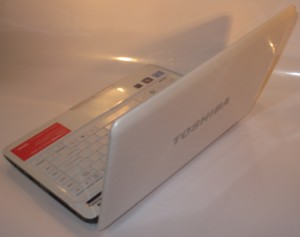 It would be more ideal for the hotspot surfer who wants to escape the office with work-in-progress or a lnotebook for giving that teenager when they head off on their first world trip; and, if the battery works right, could become an entry-level “journalist’s friend”.

Acer–to stay on with the netbook