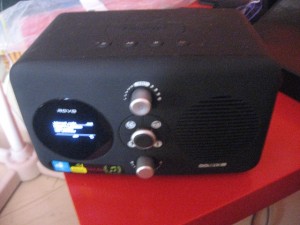 Regular readers of this site would have noticed the Internet radios that I have reviewed earlier on. These were typically tabletop radios that had a broadcast tuner capable of receiving at least FM and / or DAB digital broadcast radio. But they had Wi-Fi and, in some cases, Ethernet network connectivity which allowed them access to, most commonly, the vTuner Internet-radio directory and the ability to play through audio content from any broadcaster that listed its stream in this directory. They also had the ability to play audio content held on a DLNA media server after it was selected on the set’s control surface.

Of course, all of these sets had a line input so they can amplify other audio equipment like portable CD players but most of them had a dock for one of Apple’s iPod or iPhone mobile devices. A few of the sets even had a USB connection so you can play music held on a USB memory key.

Now the network-audio direction is coming in the form of network-capable speaker units that have Apple Airplay and, increasingly, DLNA Media-Renderer operating mode. This meant that you could use software running to these protocols to play music held on a computer, smartphone or tablet through these systems as explained in this feature article. The network connectivity for all of them is Wi-Fi to 802.11g/n standards with WPS “push-push” setup but some of these units would have an Ethernet socket for connection to an Ethernet or HomePlug network segment and / or Wi-Fi Direct so they can become their own access point for smartphones and tablets.

The manufacturers are running a range of two or three units with similar functionality but having differing speaker configurations and / or power outputs with some having the capability to offer a “punchy” sound where that tight bass does exist. As well, one or two of the models in these ranges is equipped with a rechargeable battery pack and designed for portability so they can be used on the beach or on the streets in a similar manner to those classic “ghetto-blasters” of the 1980s. 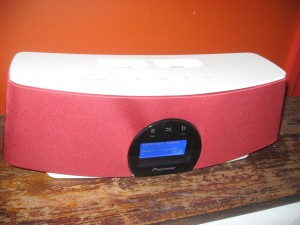 The device that predicted this level of functionality in a network speaker system was, in my opinion, the Pioneer XW-NAC3 speaker dock / Internet radio that I reviewed on this site. Here, it had Wi-Fi and Ethernet connectivity as well as support for Bluetooth A2DP audio streaming. But it used the network connectivity to play broadcast content from Internet-radio stations on the vTuner directory as well as being able to be controlled by a DLNA Media Control Point alongside the basic DLNA MediaPlayer “play-from-own-control-surface” functionality.

A problem I have discovered with some DLNA server / control point software running on Android devices is that they won’t work properly if you run the device as its own access point. This would be something that you may do if you enable “Wi-Fi tethering” on your phone to share your phone’s Internet access and data allowance with other devices.

Here, you may have to work around this by using another access point to create the temporary Wi-Fi segment. This could be done using an ordinary Wi-Fi router, even one of those “Mi-Fi” devices that work as a router for a wireless-broadband service. This solution may come in to its own with the battery-driven units that don’t have Wi-Fi Direct and you want to play content from your mobile device or laptop.

Another situation that may plague anyone who sets these units up in premises with a public Wi-Fi hotspot is that they may not work properly with these hotspots. Here, most of these public-access networks would be set up for client isolation so that no other client devices can discover each other. As well, most such networks typically use a Web interface for provisioning the Internet service. This will typically make the network unusable for point-to-point use like media playback.

Instead, if you are using that network speaker system in that hotel room or serviced apartment which has a public-access or guest-access wireless hotspot, use a “MiFi” or a similar device to create a Wi-Fi network if the computer, smartphone or speaker system doesn’t support Wi-Fi Direct. Some Wi-Fi Direct setups like the Intel implementations used for laptop computers may allow you to work the temporary network in conjunction with the public-access network and bridge Internet data to this temporary network. This would come in handy with units that offer Internet-radio functionality like the Pioneer NAC-3 or the Denon Cocoon series.

What to look for with these speaker systems

I would make sure that if you are intending to use these network speaker system with a smartphone, tablet or PC, make sure that the unit works with DLNA and Apple AirPlay.

If the speaker unit that you are after doesn’t have Wi-Fi Direct, you may have to make sure you have it working with a wireless access point like your home network’s WiFi router or a “MiFi” when you are using it on a wireless network.

Also pay attention to the sound quality and the functionality of these speakers, especially if you buy units that you intend to use “at home”. As for portable units, look for anything that also works for durability especially if they are intended to be used on the beach or by the pool.

Once you choose the right network-capable speaker system for yourself or to give as a gift, you could then end up enjoying listening to them for a long time.

A Sony Network Media Player to upgrade your HDTV with