Previously, I had covered the concept of the Wi-Fi-based wireless speakers on this Website including writing an article about how to get the most out of these and the Bluetooth variants. Now I have the chance to review two Wi-FI-enabled speaker sets from Sony – one being the midrange SA-NS410 and the other being the more-expensive SA-NS510 which will come up in a separate review. 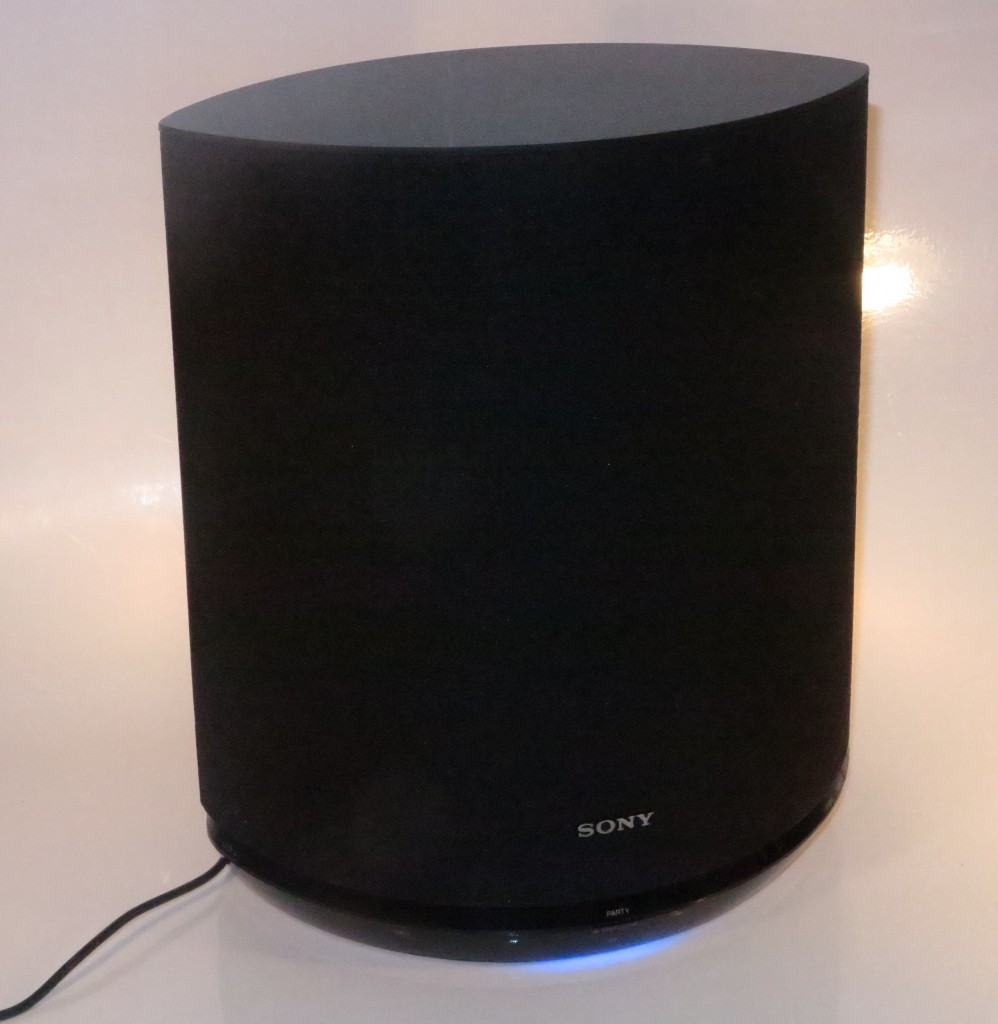 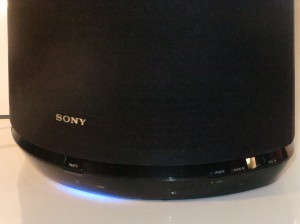 The Sony SA-NS410 wireless speaker is a deep speaker with a leaf-shape profile. You see a blue status halo appears from the bottom of the speaker if in standby but this halo glows white when the speaker is in full action playing music. There are local controls on the bottom edge of the speaker to turn it on and off, invoke WPS network enrolment, adjust the volume and select whatever is connected to the 3.5mm input jack on the back of the unit. 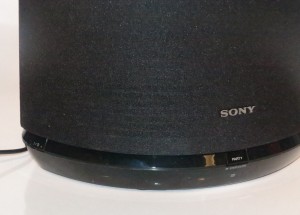 Other controls – the power switch and the Party Streaming button.

There is also another button to invoke the “Party Streaming” function which is an audio-broadcast function that is part of recent network-capable Sony home AV equipment. Here, you can have audio content playing on one of these devices such as the Sony CMT-MX750Ni music system configured as a “Party Streaming Host” and press this button to “pick up” the content through this speaker. Similarly, you could have content served to this speaker via a DLNA Media Server and “pick it up” from another of these speakers using the “Party Streaming” button.

The remote control that comes with these speakers

Of course, this speaker can also be controlled by a card-sized infra-red remote control as well as your computer or mobile device running the Network Audio Remote app.

For setup, I was able to integrate the Sony SA-NS410 wireless speaker with the home network using the “Network Setup” App on my Android phone. This required me to transcribe the SSID and security passphrase in to the phone. The app could support the ability to transfer the parameters of the network you were connected to or another network from the phone to the speaker. The speaker works as its own access point during the setup phase but I would like to have it able to work as a WiFi Direct master device or own access point so it can work as a standalone setup when you don’t have a proper small network to use it with when you want to play music from your phone. Of course, you can use these speakers with an Ethernet or HomePlug wired network segment thanks to an Ethernet jack being provided on the back of this speaker.

It is also worth noticing that these speakers have a “Network Standby” switch so you not have them come alive from DLNA control-point apps on the home network including the Audio Remote app. This can be useful if you have network problems or don’t necessarily want people to play a practical joke on you if you have the speakers in the bedroom. 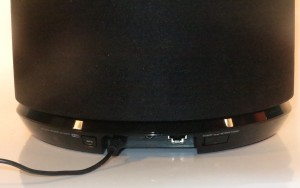 The Network Audio Remote app worked properly managing the volume and pushing music from other media servers. It could find Internet radio stations and programs but this function does leave a lot to be desired with filling out the list of stations or areas. This is where it stalls when downloading these lists and then reloads the last few stations and can be a pain with US and European localities with many stations. This was “fixed up” through a firmware update that Sony “pushed” out to this speaker and the SA-NS510 speaker.

Personally, I would recommend that Sony offers a DLNA media server with the Android “Network Audio Remote” application so you don’t have to find one of these apps to “push out” music held on your Android device. But I used the Twonky Mobile DLNA server to share out the music on my Android phone and had it controlled via the Network Audio Remote and this may be an ideal path if you have DLNA software on your Android phone that serves well but is balky as a control point.

For the computer, I was able to use the “Play To” function in Windows 8 to push music to the Sony SA-NS410 speaker from the PC and the NAS and this worked properly. If you still run a Windows XP box and use it as a DLNA server, you may have to use other DLNA control point software on that computer or use Network Audio Remote on your smartphone or tablet to manage your music.

The Sony SA-NS410 speaker was still sensitive with the Wi-Fi network although it took a few attempts to register to the router. The music played very smoothly from the DLNA server on the network-attached storage and from a French Internet-radio station. As for this Internet radio station, this was noticed during the day and with good bandwidth.

I have run the Sony SA-NS410 at the maximum level possible with Network Audio Remote and played  some Italian folk songs recorded in the 1970s and a recently-issued dance track. Here, I was doing this to identify any points where the speaker can “stress out” and make the music sound awful. At that level, I noticed very minimal amounts of clipping with the dance track and the bass accompaniment was there and came through very tight. The folk music tracks sounded clear with the guitar accompaniment and even when there was full accompaniment going on, it didn’t sound muddled.

This speaker performed well as a Party Streaming guest device but can sound glitchy due to the network not supporting proper multicast behaviour over the Wi-FI segment.

I would like to improve the way that the Sony SA-NS410 wireless speaker and its peers are set up so as to allow for transportability. Here, it could have an easy-to-invoke “new-network-setup” mode like holding down the Standby button to have it act as if it is to be set up with a new network.

Similarly, it could benefit from the ability to remember the parameters for up to five wireless networks. This could have it work with range extenders or “Mi-Fi” routers as well as being able to be taken between two different home networks for party applications. As well, the speaker could work fully as an 802.11n single-stream wireless client device rather than using 802.11g as the preferred wireless network setup. This is a problem that will beset a lot of small comsumer-electronics devices like these speakers until a wide number of manufacturers make the single-stream 802.11n WiFi chipsets for these devices at cost-effective prices.

The “Network Audio Remote” Android software could be improved so it responds to changes that affect the device as soon as they occur with minimal time lag. It could also benefit from an associated DLNA server for Android phones so you don’t have to “hunt for” separate DLNA server apps from the Google Play store.

I would recommend the Sony SA-NS410 wireless network speaker as being suitable for most network-speaker applications where you want the speaker to yield room-filling sound that has tight bass and good response across the frequencies. It would work with DLNA or AirPlay setups as well as being a line-level amplified speaker that doesn’t sound wimpy.

The Sony Party-Streaming feature can also go a long way if you have recent Sony network-capable music or home-theatre systems in use on your home network and it could add a fair bit of extra value to these systems.