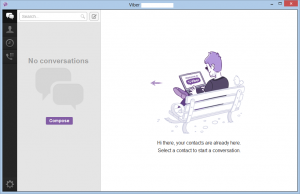 Previously, we have known of Viber as an “over-the-top” VoIP telephony program that offers a free telephony and SMS path for smartphone users. This has been of strong appeal to overseas travellers who want to escape the horrendous roaming charges that most mobile operators are charging people who use the phone out of their home country.

Now Viber have reached version 3.0 and released a desktop version of the softphone which will run on Windows or Macintosh regular computers. This has provided features like desktop-to-desktop videocalls and the ability to transfer a call between the regular computer and a mobile device. This is a sign that Viber has matured and started to approach Skype.

But for Viber to answer Skype, they have to offer IP-based videocalls on mobile clients. Similarly, they would need to provide the client software “knowhow” to enable the user interface to work on devices other than platform-based regular or mobile computing devices. This is somewhere where Skype has a considerable strength in with the Samsung and Sony smart TVs, the Panasonic Blu-Ray players, the desk phones, and the Logitech TV Cam HD Skype camera.

It can be easy to state that Viber’s free IP telephony model isn’t sustainable but they could offer services like partnership with some of the carriers like the French “n-box” carriers. They can also offer paid-for off-ramp services where a Viber customer could dial a regular phone that isn’t part of the Viber ecosystem. It can extend to a software-based “trunk” or “tie-line” for IP-based business phone systems as a subscription-driven business-to-business service.

Now that Viber has hit the stage of maturity, we could be seeing the opening of lively competition on the “over-the-top” IP-based voice and video telephony front for both consumers and small businesses.

A call to attention now exists regarding videoconferencing platform security

You can deregister iMessage if you move away from your iPhone