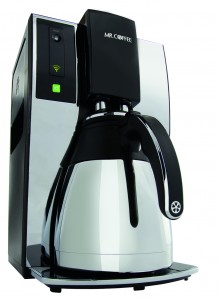 Belkin and Mr. Coffee want to brew your first pot via WiFi | Engadget

After the success of the WeMo-capable Crock-Pot slow cooker, Belkin and Jarden have worked together on another smart appliance. This time it is a drip-filter coffee maker, courtesy of the Mr. Coffee brand. 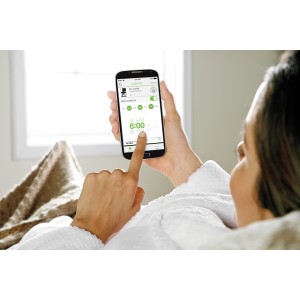 Check or set up this coffee dripolator using your smartpnone

The coffee “dripolator” works on the same “app-cessory” setup as the WeMo-capable slow cooker where you connect this appliance to your home network via Wi-Fi wireless and you download an app to your iOS or Android smartphone or tablet. Here, the app becomes another control surface for the appliance, typically offering the ability to set up more functions like delayed brewing in this case.

With the app, you can schedule when you want the coffee maker to start brewing the coffee, know if it is still brewing the coffee as well as having the ability to place an “on-device” reminder about setting up the machine for the next pot to be brewed later.The second function comes in handy when you are entertaining because you could just glance at your smartphone to know if the coffee’s ready to serve.

This appliance can turn out 10 cups of coffee in its steel insulated carafe, which avoids the risk of having “stewed coffee” that can taste awful and was often associated with this class of coffee maker which typically heats the carafe to keep the coffee drinkably warm. Something I would like to see is a way for the software to gauge the brewing time for the coffee so you can know how much time there is left for you to, for example, get the cups, milk and sugar ready when serving that pot.

The use of Belkin’s WeMo infrastructure underscores a desire by Jarden, who own the Mr. Coffee and the Crock-Pot brands, not to “reinvent the wheel” when it comes to creating a network-connected appliance. Personally, I would like to see Belkin apply WeMo technology to the HomePlug powerline network path rather than using Wi-Fi wireless for “smart-appliance” applications. This is to make use of the appliance cord as the data path rather than making sure the appliance is within range of your wireless router for reliable network operation.

As well, I would see the app-driven “smart-appliance” concept work very well with appliances that are based around a “process-driven” operation. Here, their operation requires you to prepare them to complete a process that will finish some time later like making a pot of coffee, and you can have them tell you that it’s ready through your smartphone or use that smartphone to have them commence the job “as late as possible”.