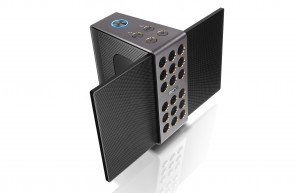 Speakers mostly turn electrical currents to sound using an electrical coil and a magnet or a piezoelectric ceramic transducer for higher frequencies and these vibrate a cone or dome to make the sound. But another method where a thin panel vibrated using an electrostatic field is used but this remains in the realm of esoteric audiophile hi-fi due to its high cost. Here, it has been valued for reproducing midrange and treble content clearly and distinctly and would play in to the hands of those of us who like jazz, acoustic pop, the classics or a lot of “new-age” and “chill-out” music.

There have been a few attempts at implementing electrostatic speaker technology in a product form that isn’t about esoteric hi-fi. During the early 1960s, Kriesler which was one of the Australian radio manufacturers that was strong at the time offered a line of furniture-piece stereo radiograms (often known desirably as stereograms or in North America as stereo consoles) which implemented electrostatic speaker technology. These valve (tube-driven) stereograms, known as the Multi Sonic range, were equipped with a regular midrange and woofer but used an electrostatic tweeter for each channel. This approach would have been considered abnormal for a “furniture-piece” stereo unit but it was an attempt to bring hi-fi towards something that didn’t necessarily dominate the average suburban living room.

But BenQ, along with in2uit, have offered portable single-piece electrostatic speakers that can work from a battery supply. These work with Bluetooth technology for playing audio from your phone or you could directly connect them to another sound system’s or playback device’s line-level audio output. The BenQ treVolo can also serve as USB computer speakers, offering a nicer way to dodge the crummy speakers that are part and parcel of portable computers. They are also optimised to handle different usage environments such as what the weather throws at us, something that a lot of the esoteric speakers wouldn’t handle.

The review pitched them as being suitable for those of us who value Mozart or Miles Davis over popular music and you have had your ears spoilt by you owning an esoteric audio setup with electrostatic speakers or hearing one of these setups in full flight at a boutique hi-fi shop or a hi-fi show like the Australian Audio And AV Shows.

UPDATE: I have added some information about an earlier effort to use electrostatic speaker technology in commodity audio equipment through subsequent knowledge of the early-60s Kriesler Multi Sonic furniture piece stereograms.

Serious challenges to Apple from the Windows and Android front