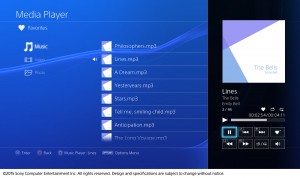 The PlayStation 4 is getting a media player | Engadget

A feature that has been considered missing from the Sony PlayStation 4 is the ability for it to be a media player whether working with media on an optical disk, USB storage or the DLNA Home Media Network. This was a feature that was baked in to the PlayStation 3 and was highly valued. It is also a feature that is part of the XBox One’s software and having media-playback abilities in a games console underscores the trend for these devices to be an “all-round” entertainment device that works with the large-screen TV.

This trend is underscored with the consoles having integrated Blu-Ray players along with such things as TV-tuner devices being available for the XBox One along with “front-end” software being available for the popular video-on-demand services like Netflix for these consoles. This appeal is underscored amongst young people who live in a small apartment or bungalow and have as their TV a small bargain-basement model without the full smart-TV functionality and they see these consoles adding all of the desired functionality. 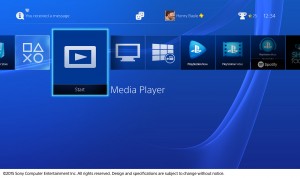 Sony received subsequent user feedback about what the PS4 could offer and one of the features that was called out by their customers as being of need was a media player. Now they have issued it as an app that can be downloaded from the PlayStation Store with an icon in the Content area of the PS4’s System Menu to invite you to download the software. This will work with content on USB storage or your DLNA-equipped NAS or computer.

It can handle most of the popular media codecs and file types as well as being able to run music files as background music. It should be available for download over the next few days so you can get the PS4 becoming more fully-fledged as a media centre.

Why provide downloading as an option for delivering online video?

Product Liquidation at Sony Centres in Sydney–my tips and suggestions