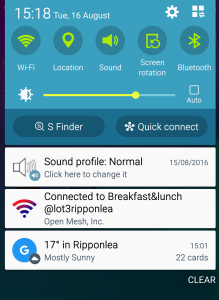 Could this mean high-throughput here?

Initially this service will cover Elwood and slowly roll out to some of Melbourne’s inner south-east bayside suburbs. This is because these areas have been placed on the back-burner as far as NBN are concerned. DGTek will also start covering Adelaide, Sydney and regional Victoria with Geelong as the first of the regional cities. 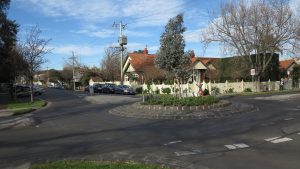 This neighbourhood stands to benefit from competitive fibre-optic broadband

This FTTP service will be similar to how Google Fiber is deployed with use of GPON technology and the fibre cables being mounted on the power poles similar to how Optus rolled out their HFC-based pay-TV infrastructure in the 1990s. One of the main goals is that every premises in the coverage area will be able to benefit from this service rather than the pay-TV rollouts not be available to all streets or premises.

Even multiple-occupancy buildings like apartment blocks and shopping centres with less than 100 premises will be provided with full fibre-to-the-premises rather than the fibre-to-the-basement deal with copper wiring to each apartment, office or shop.

Fibre-optic connectivity to each apartment

David Klizhov, who is DGTek’s founder, was involved in GPON fibre-optic rollouts in Russia and had come out 10 years ago to form this business. This has led him to be able to put this experience across in developing a competing “own-infrastructure” broadband setup using this technology. Rather than using space in Telstra’s telephone exchanges, DGTek will build their own exchange centres so they can make sure of the network’s quality in an “end-to-end” fashion. They also underscored that they can upgrade this network to XGPON technology (or other better technologies like switched fibre) without the need to deploy new fibre cable in the network.

At the time of publication, the projected connection fee is to range between AUD$275-AUD$500. The monthly cost for a baseline service with 250Gb allowance at 100Mbps symmetrical bandwidth for AUD$80 per month but there will also be a premium package with unlimited “all-you-can-eat” data at Gigabit symmetrical bandwidth for AUD$150 per month. These packages will be offered on a by-the-month “no-contract” basis. The prices and “value-for-money” aspects of this service can easily change when NBN or other competing infrastructure providers come on the scene in DGTek-covered areas.

This has come about because the Australian Competition and Consumer Commision have handed down a ruling that effectively opens up the next-generation broadband market to competition, something I have been standing for as a regular Internet user and as the editor of HomeNetworking01.info . This requires that high-speed landline broadband networks can no longer be monopolies, but are to offer wholesale Internet access to other retail ISPs. DGTek are want to offer this kind of wholesale service but they require the ISPs who buy this service to provide fair and auditable billing and  proper tech support as part of the customer-service requirements.

I did some further study in to the ACCC declaration and this placed the requirement on ISPs who are selling next-generation broadband Internet using their own fixed-line infrastructure. This was targeted with the view of having the Telstra-owned fixed-line infrastructure being subjected to NBN ownership and control in the same vein as Openreach in the UK. Here, they would have to resell access to this infrastructure on a wholesale basis while they offer a retail service. But it doesn’t place any sort of declaration on access to the “pits, poles, pipes and towers” associated with providing a communications service to allow for more infrastructure-level competition.

Starlink to offer portability for their satellite platform

Why is New Zealand pushing forward with fibre-optic broadband?

Cable One pushes towards a Gigabit Arizona city