There is still in most areas of the world an undercurrent of interest regarding broadcast-LAN setups where a server box is connected to a TV-broadcast source and streams it across a small network to be picked up by various network-enabled devices. Such setups are used to facilitate access to traditional TV services from a tablet or laptop without the need to use a USB tuner module.

A broadcast-LAN device like the HDHomeRun devices is a network server device that houses one or more radio or TV tuner front-ends and streams the audio or video content from radio or TV broadcasts over a local network. Client devices like computers, smartphones, tablets or smart TVs pull in these streams offered by the broadcast-LAN device to show on their screens or play through their speakers.

The broadcast-LAN device is typically connected to the RF source it is designed to work with like an aerial (antenna) for a traditional terrestrial radio / TV setup, a satellite dish for a satellite-TV service or a cable-TV infrastructure.

Some of these systems may even decrypt premium pay-TV content themselves through the use of a separately-installed hardware decryption module or integrated software. On the other hand, software in the client device may decrypt the premium content. Here, it is about providing access to pay-TV from multiple TV sets without the need for a set-top box.

Why is there interest in broadcast-LAN technology

One advantage is that there isn’t a need to run a connection from the RF source (cable TV, outdoor TV aerial, satellite dish) to each viewing device. It also obviates the need to use a dodgy indoor antenna such as “rabbit’s ears” as a substitute set-local connection. Nor is there the need to have a cable-TV or TV-aerial technician install cable-TV or TV-aerial sockets in each room you would likely to use an easily-transportable TV in, something that can easily be required when you use a room for a different purpose.

A broadcast-LAN setup provides a method of streaming TV over your network that is independent of your Internet service’s quality. It can then appeal to those of us who use a laptop, smartphone or tablet to watch TV content via our home network in lieu of using a small TV to watch broadcast content in secondary areas. This is because it can use your home network, especially if you use Wi-Fi wireless or HomePlug powerline technology, to transport the video streams from the broadcast-LAN device to the client devices.

As well, there isn’t the need to run multiple client apps or Web URLs to pick up the different broadcasts that are available to you. If you use the app or interface associated with the broadcast-LAN setup, you are able then to have a viewing experience similar to traditional TV viewing including the ability to channel surf like you always did.

Such technology plays in to the hands of people and societies who show a strong interest in traditional free-to-air TV content such as countries with a strong public-service broadcast scene like Europe or Australia, or the cord-cutting trend that is taking place among young people in America where people are dumping cable TV services and watching online content and local broadcast TV.

Some manufacturers have seen these facts as a point of innovation by integrating a broadcast-LAN server function in a TV-antenna device or component. For example a number of European satellite-dish component manufacturers have offered “IP LNB” devices which comprise a broadcast-LAN server device including multiple tuners in an LNB antenna device that mounts on to a satellite dish, with these devices being powered by Power-Over-Ethernet technology. Similarly, some indoor TV aerials and portable satellite dishes are being equipped with this functionality including, in some cases, DHCP and Wi-Fi access point functionality to allow for a transportable TV setup for your tablet or laptop. 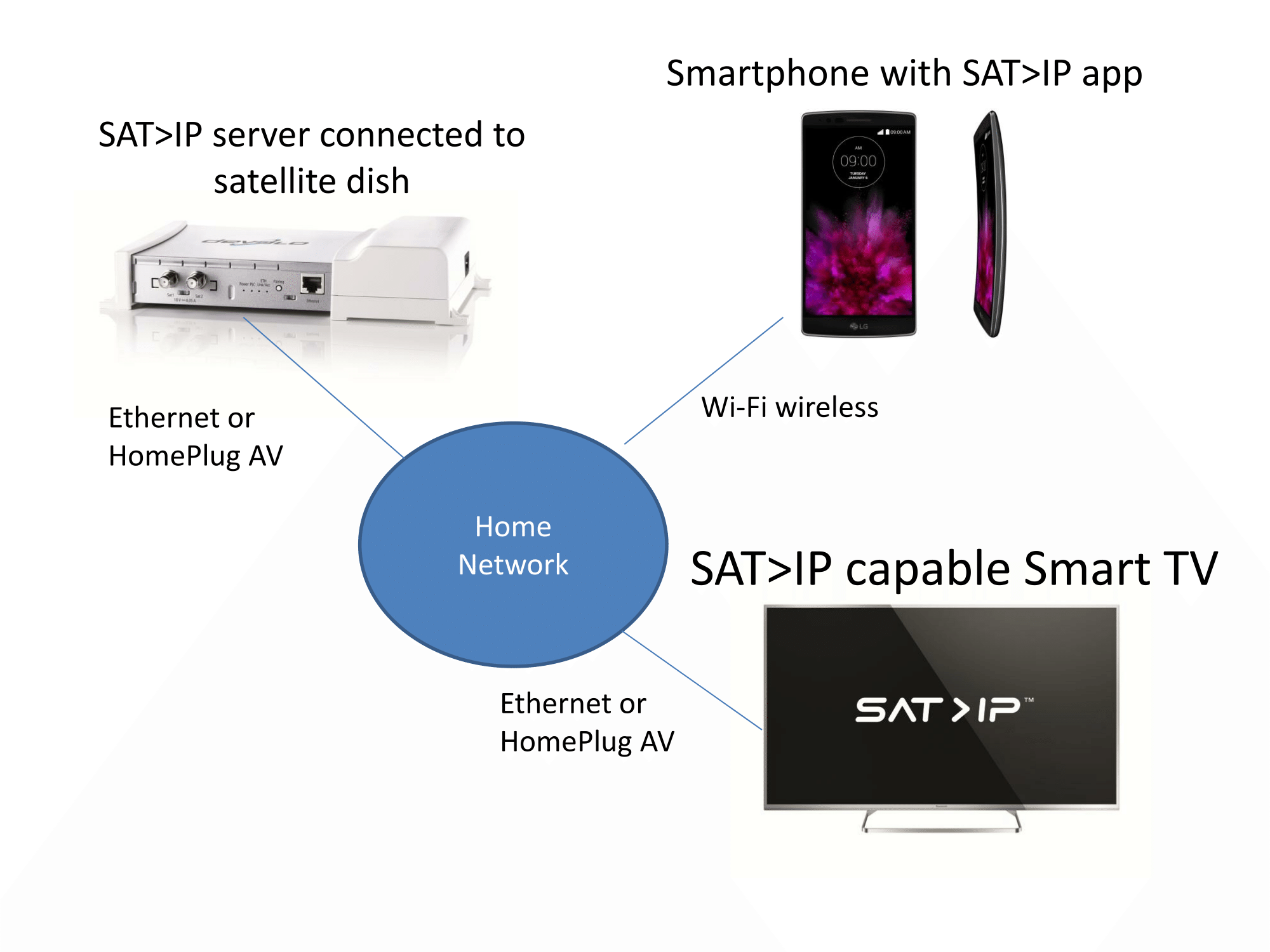 What SAT>IP is about with satellite TV

For Europe, Asia and Oceania, the European technology-standards bodies have worked on standards that facilitate broadcast-LAN setups. These are SAT>IP, better referred to as SAT-IP, which links satellite-TV tuners and client hardware or software to an IP-based small local network; and DVB-I which is about integrating IP-based TV sources to the same setup and usage experience as regular RF-based TV sources. It has also led to both standards bodies to work towards using the same protocols no matter whether it’s cable, terrestrial or satellite.

Another driver that has been called out in the US market through the Obama presidency was the idea of access to cable TV across one’s household without the need to equip each TV with a set-top box provided by the cable-TV provider. But this idea has fallen apart thanks to a newer government that supports the status quo with the cable-TV providers.

It also had been pitched towards the cable and satellite TV industry as a way to save money on set-top-box inventory and allow, for example, the rental of one highly-capable multi-tuner PVR box that connects to the subscriber’s home network and the main TV. The household then connects secondary TVs and computing devices to this PVR box via the same home network to view live or recorded TV content offered by the pay-TV service on these devices.

Similarly, an increasing number of broadcast-LAN server devices support DLNA / UPnP AV content-discovery standards which are supported by most Smart TVs and video peripherals. Here, it means that most of these devices can pull in the TV stations without the need for extra software.

A broadcast-LAN setup offers a way to future-proof one’s TV experience for newer broadcasting technologies. This is more so as ATSC and DVB are investigating, trialling or driving the market to implement newer digital TV standards that can support 4K UHD TV broadcasts. Here, a standards-compliant broadcast-LAN device could be able to use its DLNA presence or a single app to bring forth TV delivered according to newer standards to existing equipment.

At the moment, the broadcast-LAN idea is primarily being used by people with higher technical / IT skills. This is typically due to various rigmaroles being required to set up most of these server boxes or a requirement to use set-top boxes or other video peripherals with most existing TVs. It also includes being able to track down necessary client software for most operating systems if you are using a laptop, tablet or smartphone.

There will have to he the idea of a simplified setup routine to reduce the time taken to get a broadcast-LAN setup running or adapting it to newer broadcast conditions like the arrival of new stations or stations changing their output channels. With SAT>IP setups, it would be facilitated by the client devices and software “remembering” channel details as a channel update is performed. On the other hand, it may be about the broadcast-LAN box remembering these details and you using a Web-based user interface to instigate a channel scan.

The SAT>IP setup could support server-side caching so that new clients can quickly download a broadcaster details list when they are setup rather than causing the broadcast-LAN box to do a channel scan. Similarly a server-based setup could provide for a Web-based UPnP-compliant setup with a lean-back display optimisation to allow users or installers to complete tune-in procedures, along with a hardware-based “install” button to instigate tuning and network-interface setup.

One issue that has to be raised is to provide station-listing-aggregation or EPG-aggregation so that you see a TV station as one entry even if you are using multiple broadcast-LAN devices. This could be facilitated by one server device acting as an aggregator or through the use of advanced client software. Answering this question could facilitate handling sites with many end-users or PVRs recording many shows concurrently. This is a situation that comes up during peak TV-ratings seasons where all the broadcasters concurrently run shows of popular interest.

Another issue that will come up is for client devices to support standards-driven Web-based interactive TV like HBBTV or RVU when they receive broadcast content through a broadcast-LAN setup.

Marketing the concept to everyone

Then there is the issue of marketing the broadcast-LAN concept to mainstream TV viewers. Firstly, it would be successful for setups that are standards-based like SAT>IP and aren’t dependent on particular manufacturer-supplied apps.

The main use cases that would be positioned here are to support the use of supplementary viewing devices without the need to pull extra RF cable; or to support satellite TV in a convenient manner. It is of key importance to those of us who live in rented homes or multi-dwelling buildings where you have to seek your landlord’s or building committee’s permission to have extra TV outlets installed.

It also includes the use of portable computing devices especially tablets and laptops for viewing TV anywhere within the scope of your home network.

TV manufacturers would also have to provide network and broadcast-LAN client functionality within cheaper TV sets that are pitched as second or supplementary sets (typically sets with screens less that 40 inches or having reduced functionality), as well as the larger TVs typically pitched for primary use. As well, providing easy-to-use client software that can be an add-on app or baked in to the operating system could open up this experience for people using devices like tablets, games consoles or laptop computers.

As well, games consoles, media boxes, Blu-Ray players and similar video peripherals would need to support standards-based broadcast-LAN client functionality. This would be of importance with the fact that these devices can enable secondary TV sets not equipped with broadcast-LAN client capabilities such as older sets that have been pushed down from primary-area service.

The concept of broadcast-LAN server devices that work with your home network still has relevance today especially where receiver-setup flexibility is important. It also allows for multiple receiver devices to be operated in premises where installation of RF infrastructure will be difficult like rented premises.

But these setups need to be simplified when it comes to installation or operation and awareness of this concept needs to be underscored across the general populace.