Home
Commentary
A call for a public-service Internet 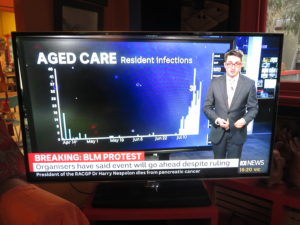 The BBC and similar public-service broadcasters are calling for the existence of a “public service Internet” arrangement around the world.

Here, most of these broadcasters are considered by most people as being of high respect for both factual content and entertainment. For example, in countries with a strong public-service-broadcasting culture, childrens’ TV content from these broadcasters like  “Bluey” on the ABC or “The Wombles” on the BBC was seen to he safe and pleasing to watch by both adults and children.

Or there is a significant preference to tune in to public-service broadcasters for news on issues that matter. For example I have been using the ABC as a “go-to” news-media source during the COVID-19 coronavirus plague due to its accuracy and impartiality on these topics.

It is about maintaining and safeguarding the existence and funding of these public-service broadcasters in an environment where younger people are moving away from traditional broadcast media. For that matter, Generation X people born between 1965 and 1981 are considered to be the last generation to value traditional broadcast media thanks to watching or listening to that kind of media through affordable equipment through their teen years.

But the issue that has become of concern is the dominance of Big Tech in the media space. Here, it’s about using services offered by Google, Facebook, Amazon, Apple and co for social-media, search-engine or news portal functionality with younger people simply using TV sets as display devices for online media services.

This has led to issues being raised about monopoly and cartel power exercised by these companies. It also has been about data surveillance and creation of algorithm-driven politics facilitating online populism and filter bubbles. There is also the issue of these companies creating or facilitating an Internet experience equivalent to that of shopping in a large suburban shopping mall full of mainstream store chains.

The call had been strengthened by the COVID-19 coronavirus plague along with the light shone on climate change and social inequality issues. I also see it underscored by the rampant disinformation and fake news campaigns targeting the various COVID-19 public-health and climate-change mitigation measures. This is especially where a lot of the disinformation was targeting minority groups and disadvantaged, and their allies.

The idea of a public-service Internet is to create a space that is free from information-polarisation while supporting affordable access to accurate and reliable news. It could be about assuring access to proper educational resources, provide safe relevant children’s content or properly and sensitively reflect a nation’s culture.

Here, the public-service broadcasters’ representatives will push this concept as a manifesto that will be put in the public eye and in front of policyholders in the coming months.

But how could this be achieved?

For example the public service media would have their online services provided through a high-quality always-accessible content-delivery-network that is established and maintained according to public-service terms. This could include support for “edge-based” content distribution like Netflix’s approach of content servers at ISP headends along with a high quality-of-service mandate for content distribution,

It could include a public-service-focused social-network and blogging platform used by the public-service broadcasters or government departments’ public-relations efforts.

On the other hand, this could be about creating a retail ISP service that is operated on public-service terms. This may be supported by an entity like the national post-office and providing Internet presence for public-service broadcasters, hospitals and similar essential-service entities. It would also be about offering affordable fixed and mobile Internet service to needy people like students or people on welfare.

What about the community broadcasting sector?

A question that can also crop up is whether the non-profit community-broadcasting sector should be seen in the same light as public-service broadcasters in the concept of a “public-service Internet”, In some countries like the USA, these services are highly valued thanks to most affiliating with public-service-broadcast networks like PBS or NPR.

But areas like Europe or Australasia see these broadcasters as complementary to the main public-service and commercial broadcasters. In that situation, could these community broadcasters be seen as needing access to a public-service Internet setup. This is more so where such broadcasters can reach particular communities such as Indigenous groups or minority-language speakers on a grassroots level.

At least the idea of creating a public-service Internet platform is being put forward by the public-service broadcasters in order to extend their remit in to the online space. It would also appeal to adults and children who value accurate and unbiased information or content reflecting their nation’s culture without pandering to commercialism.

How about the expansion docks with room for extra secondary storage