Previously, we got our news through newspapers, magazines and radio / TV broadcasters who had invested significant amounts of money or time in journalism efforts. Now the Internet has reduced the friction associated with publishing content – you could set up an easily-viewable Website for very little time and cost and pump it with whatever written, pictorial, audio or video content you can. 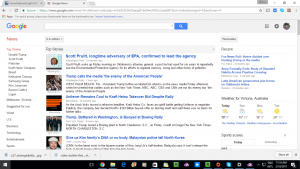 This has allowed for an increase in the amount of news content that is of questionable accuracy and value to be easily made available to people. It is exaggerated by online services such as search and aggregation services of the Google or Buzzfeed ilk and social media of the Facebook ilk being a major “go-to” point, if not the “go-to” point for our news-reading. In some cases, it is thanks to these services using “virtual newspaper” views and “trending-topic” lists to make it easy for one to see what has hit the news.

As well, with traditional media reducing their newsroom budgets which leads to reduction in the number of journalists in a newsroom, it gets to the point where content from online news-aggregation services ends up in the newspapers or traditional media’s online presence.

The fact that news of questionable accuracy or value is creeping in to our conversation space with some saying that it has affected elections and referenda is bringing forward new concepts like “post-truth”, “alternative facts” and “fake news” with these terms part of the lexicon. What is being done about it to allow people to be sure they are getting proper information?

Lately, a few news publishers and broadcasters have instigated “fact-checking” organisations or departments where they verify the authenticity of claims and facts that are coming in to their newsrooms. This has led to stories acquiring “Fact-check” or “Truth-meter” gauges along with copy regarding the veracity of these claims. In some cases, these are also appearing on dedicated Web pages that the news publisher runs.

In a lot of cases, such as Australia’s ABC, these “fact-checking” departments work in concert with another standalone organisation like a university, a government’s election-oversight department or a public-policy organisation. This partnership effectively “sharpens the fact-checking department’s knives” so they can do their job better.

But the question that is facing us is how are we sure that the news item we are about to click on in Google or share in Facebook is kosher or not. Google have taken this further by integrating the results from fact-check organisations in articles listed in the Google News Website or Google News & Weather iOS / Android mobile news apps and calling these “fact-check” results out with a tag. The same feature is also being used on the News search tab when you search for a particular topic. Initially this feature was rolled out in to the US and UK markets but is slowly being rolled out in to other markets like France, Germany, Brazil and Mexico.

Google is also underpinning various fact-check efforts through helping publishers build up their efforts or instigating event-specific efforts like the CrossCheck effort involving 20 French newsrooms thanks to the French presidential election. It is in addition to supporting the First Draft Coalition who helps with assuring the integrity of the news being put up on the Internet. It also includes the use of the Digital Initiative Fund to help newsrooms and others instigate or improve their fact-checking operations.

A question that will also be raised is how to identify the political bias of a particular media outlet and convey that in a search engine. This is something that has been undertaken by the Media Bias / Fact Check Website which is an independently-run source that assesses media coverage of US issues and how biased the media outlet is.

But a situation that needs to appear is the ability for fact-check organisations who implement those “accuracy gauges” to share these metrics as machine-useable metadata that can be interpreted through the rich search interfaces that Google and their ilk provide. Similarly, the provision of this metadata and its interpretation by other search engines or social-media sites can provide a similar advantage. But it would require the use of “news categorisation” metadata relating to news events, locations and the actors who are part of them to make this more feasible.

Similarly, a social network like Facebook could use the fact-checking resources out there to identify where fake news is being spread so that users can be certain if that link they intend to share is questionable or not.

To the same extent, engaging government election-oversight departments like the Australian Electoral Commission, the Federal Election Commission in the USA and the Electoral Commission in the UK in the fact-checking fabric can help with assuring that there are proper and fair elections.  This is more so as these departments perform a strong role in overseeing the campaigns that take place in the lead up to an election and they could use the fact-checking organisations to identify where campaigns are being run with questionable information or in an improper manner.

As part of our research in to a news topic, we could be seeing the fact-checking resources playing an important role in sorting the facts from the spin and conspiracy nonsense.

Facebook Employees Are In Revolt Over Fake News | Gizmodo

Does the internet have a fake-news problem? | CNet

Want to keep fake news out of your newsfeed? College professor creates list of sites to avoid | Los Angeles Times

Since Donald Trump gained election victory in the USA, there has been some concern amongst a few of Silicon Valley’s tech companies regarding the existence of “fake news”.

This is typically a story that is presented in order to refer to an actual news event but doesn’t relate to any actual news event. In some cases, such stories a hyped-up versions of an existing news item but in a lot of cases, these stories are built up on rumours.

The existence of Internet-distributed fake news has been of concern amongst journalists especially where newsroom budgets are being cut back and more news publishers and broadcasters are resorting to “rip-and-read” journalism, something previously associated with newscasts provided by music-focused FM radio stations.

Similarly, most of us are using Internet-based news sources as part of our personal news-media options or or only source of news, especially when we are using portable devices like ultraportable laptops, tablets or smartphones as our main Internet terminals for Web browsing.

Silicon Valley also see the proliferation of fake news as a threat to the provision of balanced coverage of news and opinion because they see this as a vehicle for delivering the populist political agenda rather than level-headed intelligent news. This is typically because the headline and copy in “fake news” reports is written in a way to whip up an angry sentiment regarding the topics concerned, thus discouraging further personal research.

But Facebook and Google are tackling this problem initially by turning off the advertising-money tap for fake-news sites. Facebook will apply this to ad-funded apps that work alongside these sites while Google will apply this as a policy for people who sign up to the AdSense online display-ads platform.

There is the issue of what kind of curating exists in the algorithms that list search results or news items on a search-engine or social-media page. It also includes how the veracity of news content is being deemed, even though Google and Facebook are avoiding being in a position where they can be seen as “arbiters of truth”.

The big question that can exist is what other actions could Silicon Valley take to curb the dissemination of fake news beyond just simply having their ad networks turn off the supply of advertising to these sites? This is because the popular search engines are essentially machine-generated indexes of the Web, while the Social Web and the blogosphere are ways where people share links to resources that exist on the Web.

Some people were suggesting the ability for a search engine like Google or a social network site like Facebook to have its user interface “flag” references to known fake-news stories, based on user or other reports. Similarly, someone could write desktop or mobile software like a browser add-on that does this same thing, or simply publish a publicly-available list of known “fake-news” Websites for people to avoid.

This is infact an angle that a US-based college professor had taken where she prepared a Google Docs resource listing the Websites hosting that kind of news, in order to help people clean their RSS newsfeeds of misinformation, with some mainstream online news sources including the New York Magazine providing a link to this resource.

The issue of fake news distributed via the Internet is becoming a real problem, but Silicon Valley is looking at different ways to solve this problem and bring to it the same level of respect that was associated with traditional media.

Just lately, a disaster that has affected many people has occurred with many casualties in the form of the Nepal earthquake.

But what follows on the tail of these disasters is an avalanche of spam email and flaky social-media posts that offer extra insight or paths to assistance for people who are touched by these events. As well, it is the time when scams pretending to be charity appeals intending to provide aid to the victims of this earthquake also appear on the Internet. It is something I have drawn attention to previously when there was the Malaysian Airlines MH370 air disaster which drew out these scams and am drawing attention to in relation to the latest earthquake. But they lead you to malware or to harvest users’ personal or financial details. In these situations, it pays to think before you click on that link so you are safe with the Net.

Check for legitimate resources that offer information about your relatives’ or friends’ wellbeing and some of these could include Nepalese consulates in your area, the Red Cross or similar services and work with them “from the horse’s mouth”. That means to deal with official websites that are known to the public and are usually published by the media as part of their coverage on the issue.

Facebook does offer a legitimate Safety Check service which comes in to play during civil emergencies. Here, it would identify if one was in an affected geographical area and allow the person to interact with them to know if they are safe and this status would appear in your Facebook Friends’ news feed. For that concerned person, they would be able to check on the News Feed for their relative’s or friend’s status. But be careful of any “fake friends” that appear around the time of this disaster and any post from a friend of yours that isn’t known to be in the area but is out of order should be questioned.

As for charity appeals, most of the media provide information about legitimate fundraising efforts that are taking place so you don’t get fleeced easily.

What to do is to be aware and careful with using the Internet to find details about who is affected by a major event and check with trusted resources.