I am reviewing the Brother PT-P900W Wi-Fi-capable label printer which is the latest in the range of labellers based on Brother’s P-Touch thermal-print labelling system. This uses the same “drop-in” label-tape cassettes as the rest of the P-Touch labellers such as the TZe-261 wide white tape that came with this machine.

Users can also purchase a rechargeable battery pack if they want to run it on battery power and this charges with the supplied AC adaptor. As well, you can also purchase a serial adaptor to work with input devices like scales or barcode scanners that implement traditional serial connections.

But the piece de resistance that Brother puts forward is a touch-panel kit with LCD display that allows the machine to be purposed as a task-specific label writer. This includes the ability to work with pre-defined label templates or where you may have to enter numeric data.

This unit is part of Brother’s P-Touch thermal labelling system which uses TZ-series label cassettes and came with the TZe-261 label cassette which had a wide writing space. 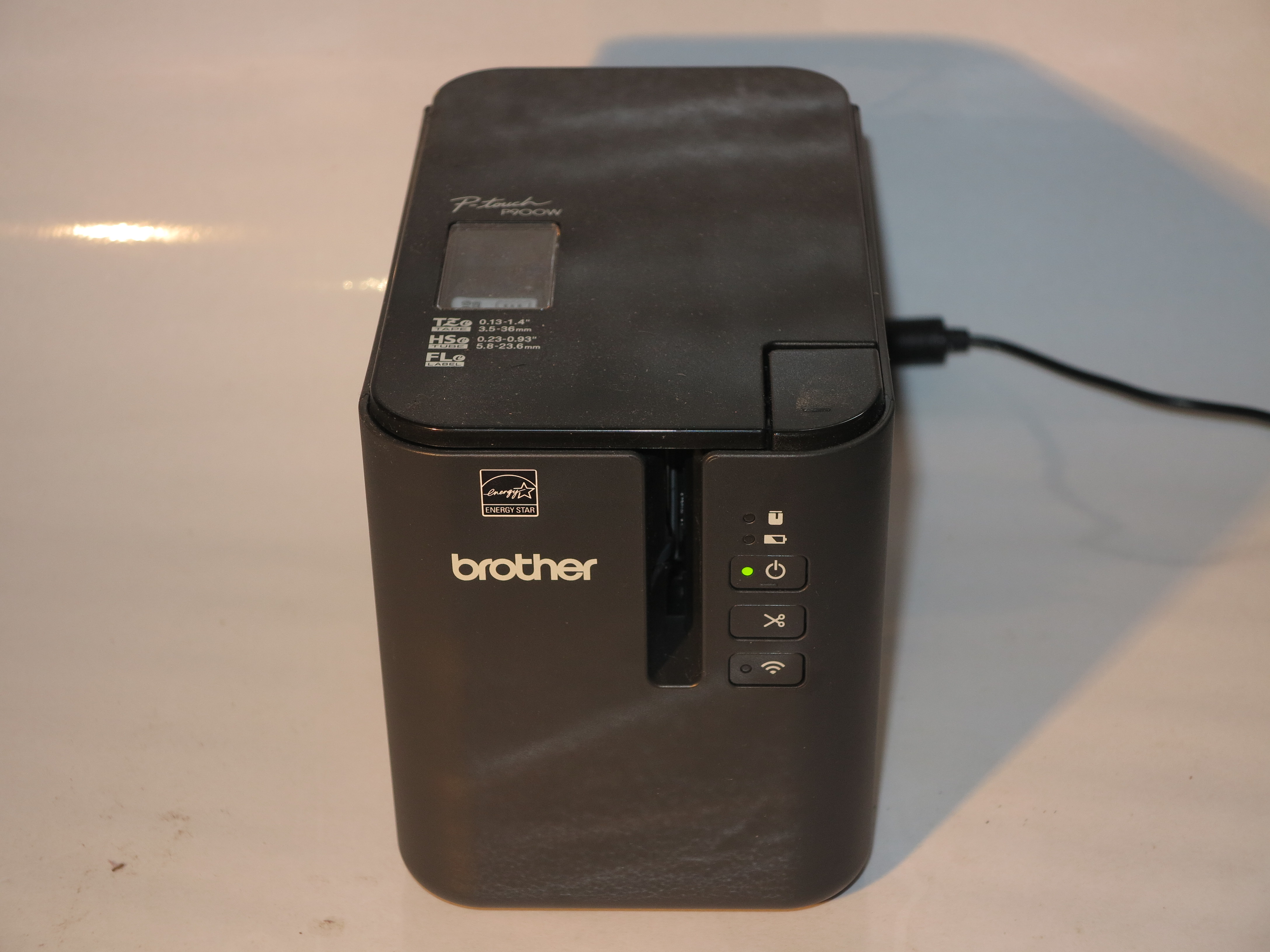 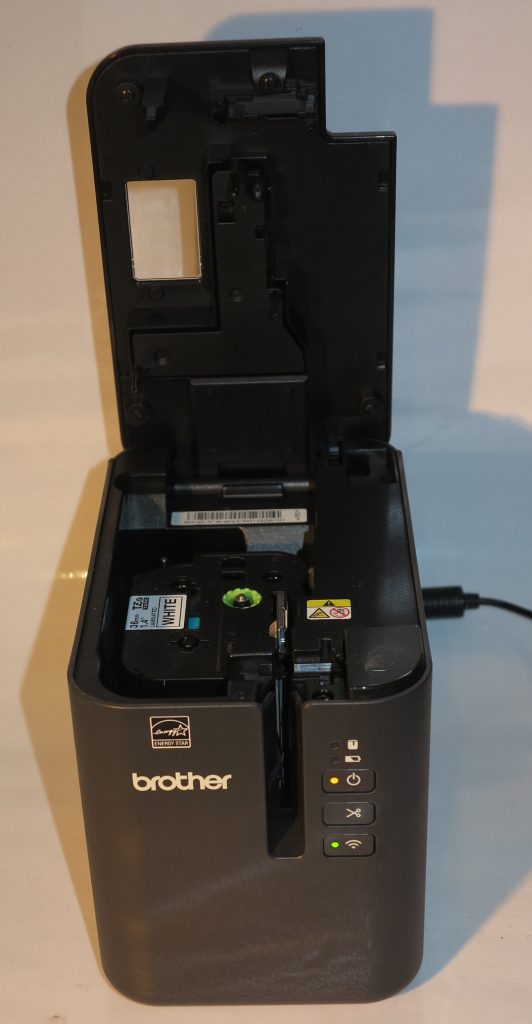 How you load the Brother P-Touch PT-P900W label printer

The Brother PT-P900 family of printers has a similar look to Brother’s latest business inkjet printers like the MFC-J5720DW inkjet multifunction thanks to the black housing with the rounded edges and flat top reminiscent of some 1950s-era home appliances. But it is easy to load and unload thanks to a lid that opens to reveal where the label cassette is.

Previously, I ran the Brother PT-P900W as a printer connected to my computer and it has worked as expected with the software installing properly after I had downloaded it from Brother’s Website. It also was a chance for all the P-Touch Editor software that was on my computer to be updated, which would represent a situation if you have one or more other P-Touch labellers that are customarily hooked up to your computer or on your network.

The Brother PT-P900W implements a highly-sophisticated network functionality for its Wi-Fi network. Here, it can work with 802.11g/n networks but needs you to set it up for a network that doesn’t implement WPS-based “push-to-setup” connectivity on its router or access point – thankfully most “Mi-Fi” portable Wi-FI routers can answer this call if you are setting up a mobile wireless network.

This unit can also be set up to work with WPA2-Enterprise wireless-network segments found in larger businesses where there is individual user-based login to the network. But you may have to upload EAP-TLS certificates to the device from a regular computer. As well, it is future-proof in that it supports IPv6 in a dual-stack form.

I set the Brother P-Touch PT-P900W label printer with my home network’s Wi-Fi segment and it worked properly, both with my phone connected to the home network and to the unit’s own Wireless Direct access point.

The supplied Brother P-Touch Windows software is very flexible when it comes to printing needs and it can allow you to “gang” multiple Brother PT-P900W / PT-P950NW label printers with the same labelling tape for “round-robin” multiple-machine printing jobs. This can help with dealing with intense jobs like a stocktake or large delivery for example.

As expected for devices based on the Brother P-Touch system, the output quality was very crisp and I had found that the TZe-261 label tape that came with the review unit could answer most labelling needs. This is more so if you, for example, make use of two lines for your labels.

I brought the Brother P-Touch P900W label printer out to the church I worship God at in order to demonstrate it to a friend there who works as an electrician and obtain his opinion on this device. I used it along with my smartphone to turn out a label and he noticed that the machine turned out the label which he wanted to use on one of the mixing desk’s faders very quickly and clearly. It didn’t take long for the Brother labeller and my smartphone to set up together and I was able to have the label turned out very quickly.

But he noticed that this machine looked a bit bulky and mentioned to me that he wouldn’t find it suitable for regular portable “on-the-go” use. He reckoned that it would work well for office-based applications and occasional transportable use.

Personally, I would like to see a manual override between Wireless Direct and Wi-Fi infrastructure operating modes, which can come in handy if you want the unit to start quickly or to deal with difficult situations.

Similarly, I would like to allow for mobile-based app-driven Wi-Fi setup similar to a lot of Wi-Fi-based wireless speakers and similar devices are set up. This is where you can have the opportunity to select Wireless Direct, connect your mobile device to the label writer’s Wireless Direct network, and use a mobile app to upload your infrastructure wireless-network segment’s parameters to the printer.

The WPS “push-to-setup” functionality could also be extended to client-device setup so you can enrol your “open-frame” mobile device to the Brother labeller’s Wireless Direct network at the touch of a button.

The baseline unit in this family could implement a USB Type A socket for barcode labellers and other data-input devices that use USB because this connection standard is being seen as the way to connect peripheral devices. This could be extended to having the machines recognise the standard USB keyboard or, in the case of the Bluetooth interface, Bluetooth keyboards as an input device so they can quickly be purposed as a label writer

Personally, I would see the Brother P-Touch PT-P900W and PT-950NW label printers not as being for use on the road but as a tool for office-based workflow labelling with a regular computer or mobile device such as a smartphone, especially where the mobile device is likely to be used frequently as an input tool. Examples of this could be inventory control for the “reserves” at the back of a shop; or in a kitchen to keep control of foodstuffs and their expiry dates.

This is whereas the Brother P-Touch PT-E550WVP handheld heavy-duty label writer can earn its keep in the back of a tradesman’s van for on-site labelling.