Fibre to the premises courtesy of Gigaclear

While the NBN are taking things slowly to roll out next-generation broadband Internet in to Australian communities and providing most with a fibre-copper service, the UK are facing a similar problem.

Most of urban Britain are being provisioned with similar fibre-copper next-generation broadband service, typically “fibre-to-the-cabinet” with a copper VDSL2 link between the street cabinet and the customer’s door. This is while a handful of ISPs and infrastructure providers like Gigaclear, Cityfibre and Hyperoptic are running fibre-to-the-premises next-generation broadband infrastructure, whether to country properties or large urban developments.

But a lot of telcos and ISPs are using the word “fibre” as part of hawking their next-generation broadband Internet product, while it is seen as a keyword by the marketers to say that the service will provide higher bandwidth to the customer than what was normally expected. This is although they are running a fibre-copper Internet service in most of their territories.

What is being raised is how should a broadband service be qualified in relationship to its infrastructure when the service is advertised to the public. It isn’t just about whether a service implements fibre to the premises or not, but how much of the run between the exchange or head-end and the customer’s premises is being covered by a fibre link.

What Gigaclear and co are raising is that customers need to know what they are able to get when they sign up for a next-generation broadband Internet service or other advanced telecommunications service. 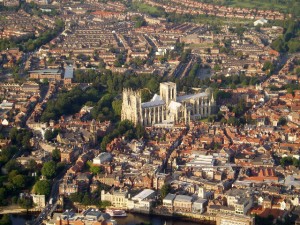 Battle for your broadband custom in York hotting up | ThinkBroadband

York in the UK is showing up as a market where there is some intense competition for next-generation broadband Internet service.

This has come about due to fibre-optic infrastructure being laid down by CityFibre in conjunction with Sky and TalkTalk for a fibre-to-the-premises network capable of operating to 940Mbps. Just lately, Sky had connected their first customer to this network.

It brought out a war of words about what qualifies a city as an “ultrafast” or “gigabit” city when it comes to the presence of next-generation broadband Internet service. The European Union and the UK Government qualified a residential Internet service “ultrafast” as being greater than 100Mbps “at the customer’s door”. But CityFibre were using the term “Gigabit City” to qualify where there is an Internet service with a bandwidth capable of close to a Gigabit per second and is an actual revenue-providing service rather than a trial service.

It is feasible to call many of the UK’s cities as being “ultrafast” when it comes to next-generation broadband deployment because there was services of at least 152Mbps bandwidth penetrating 90% of these cities. Then the other qualifier was the presence of fibre-to-the-premises service with Kingston Upon Hull having 30.9% coverage.

Questions were also raised about BT Openreach providing full fibre-to-the-premises service in York with their central-activities district having native FTTP coverage of 12.4% and the rest of that city having 3.25%. As well, Hyperoptic had wired a large number of apartment blocks in York with FTTP broadband,

The competition issue that may need to be resolved is whether there is any “building-over” taking place where competing infrastructure providers are deploying their infrastructure in to each other’s territory. In a similar vein, there is also the issue of the availability of competing retail Internet service across many or all of the different infrastructures that exist. This could come to a point where the UK will need to determine a policy that affects competing next-generation broadband Internet services delivered using competing last-mile infrastructures in urban areas. This will have to encompass competitors “building over” each others’ infrastructure including access to multiple-premises buildings like apartment or office blocks and shopping centres.

Google are putting their fibre-optic next-generation broadband paws in to the UK market while trying to provide competitive Internet service in some US communities. It is seen to be their first foray in to the European market.

This is being achieved with them working with CityFibre, which may not be seen as adding extra competition in that market. Firstly, this is to be seen as a threat to BSkyB’s partnership and place themselves at loggerheads with a BSkyB / TalkTalk fibre-optic rollout which is passing 20,000 households in York.

But it is set to put more pressure on BT to deploy more next-generation broadband, especially as the British Internet press is complaining about BT Openreach taking a long time to roll out this service across the biggest Internet-service market outside the US. Google will also see this as a platform to run an HD-capable IPTV service which is ready for 4K UHDTV.

My question is whether Google could make further efforts in working as a competitive next-generation broadband provider for the British market, whether as a wholesale provider or as a retail provider. As well, could they be in a position to help with Scotland’s broadband goal if Scotland does go independent? Similarly, could they be able to put their claws in to other European areas like Spain, Germany and Italy with a goal to upset the applecart when it comes to competitive Internet service there.