A very common criticism that I have heard concerning laptop computers is that most of them don’t yield very good sound quality. Here, the sound quality is very weak and tinny, which can impair your enjoyment of music or movies on these systems. Similarly a lot of popularly-priced tabletop Internet radios give sound quality that is comparable to a 1970s-era portable radio or cassette recorder.

How can we improve the sound quality of these devices. Firstly, I would make sure that the device has a headphone or line-out connection. All laptops and most Internet radios would be equipped with this connection and if I review an Internet radio and it doesn’t have that kind of connection, I would list that as a failure.

I will be using audio terminology through this article and if you are unfamiliar with these terms, have a look at this reference page that I have created.

A lot of existing sound systems that have a line-level input for connection to other devices can help to improve the sound output of laptops, tablets, Internet radios and similar devices. Typically you would connect the source device to this sound system, select the input that your device is connected to on that system.

Then you would need to set the source device’s output level to a point where the sound will come through strongly and clearly and have any tone control on the source disabled or set to “flat”. You would subsequently adjust the sound volume and tone by using the controls on your existing sound equipment that your device is play into.

This practice is a common use for older hi-fi equipment that has been supplanted by newer and better equipment ever since computer audio came on the scene. In a similar way, the 1980s-era “ghetto blasters” continued to earn their keep even if the cassette mechanism failed by just becoming amplified speakers for computer equipment. These audio relics were simply dusted off and connected to the computer’s audio output and continued their service that way.

There are some amplifiers that may have a PHONO input that is able to work with ceramic-cartridge pickups or magnetic-cartridge pickups by you flicking a switch between “CERAMIC” or “XTAL” and “MAGNETIC” or “MM”. In this case, you would have to select the “CERAMIC” option on this switch. This practice is also used with some “ghetto blasters” and other low-end equipment that uses a PHONO/LINE connection for one set of RCA inputs.

You may be able to use a digital link of some sort between the source device and the destination if both have a similar kind of digital connection.

The coaxial SPDIF connection is commonly in the form of an RCA socket but a handful of equipment from high-end audio manufacturers may use a BNC socket similar to what was used for the old-style coaxial Ethernet connections.

The optical connection typically uses a square “Toslink” plug for most mains-powered equipment but some laptops and other low-profile equipment may use a 3.5mm optical socket.

You may have to configure computer SPDIF outputs to pass PCM audio signals rather than a bitstream signal if the playback device is a device other than a Dolby-Digital-equipped home-theatre receiver. This setting is the lowest common denominator for all equipment such as stereo digital amplifiers and digital-analogue-converter components.

This connection type is used on most recent-issue laptops and works with large flatscreen TVs and all recent-issue home-theatre receivers.

But there are catches with using this connector. Some low-end home-theatre receivers use these connections only to switch video sources to the connected TV screen without reproducing the sound that comes across this connection. Similarly, some DisplayPort-HDMI adaptors wont pass sound to the HDMI connector unless they have appropriate connections. 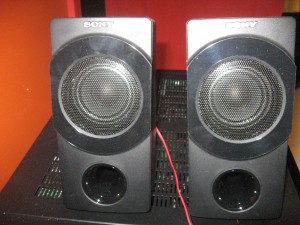 You can purchase amplified speaker systems for use with your computer or similar equipment. A lot of these speakers don’t have a volume control on them and are intended to be adjusted using the host device’s volume control, with the amplifiers being simply power amplifiers.

There are the two-piece speakers, known as 2.0 setups, which are simply a pair of amplified speakers. Examples of these include the B&O Beolab 4 PC or the JBL Duet II. A lot of them use a stereo amplifier on one speaker housing with the other speaker plugged in to the amplified housing whereas other better-quality units use separate amplifiers in each housing.

Another type of amplified-speaker system that is common for computers and similar applications is the 2.1 setup, exemplified by the Sony SRS-DB500 that I previously reviewed or the Logitech Z623. This consists of two small speakers capable of reproducing midrange and treble frequencies in stereo that are connected to a bass module, commonly known as a “subwoofer”. This module has the amplification for all of the speakers as well as the speaker for reproducing the bass frequencies. These systems are well known for very good bass response due to their separate bass module and typically have a separate bass-level control to manage that response.

A variation on this theme that I have noticed is a “5.1” surround speaker setup with five of the small speakers and separate input channels for each of the speakers. Examples of these include the Creative SRS-A520 and the Logitech Z506.These are typically pitched at games enthusiasts who want the full punch of the sound effects in their games.

Good-quality single-piece iPod speaker docks that I have mentioned previously in this site, like the Bose SoundDock speakers or the B&O Beosound 8 can work well as extension speakers in situations where speaker placement isn’t critical, such as music playback from a laptop or mobile device.

Most of the speakers are connected to the headphone output or line output of the sound sources. But more expensive variants of these speakers have integrated digital-decoding circuitry and connect to the sound source using a regular SPDIF or HDMI digital interconnect or USB connection.

As with buying hi-fi speaker systems, it pays to take your time, shop around and hear how the speakers sound if you want to buy a set that you will enjoy listening to. Keep an eye on the reviews in the computer and audio press and blogosphere so you can hear from other users about their experience. In a lot of cases, you will pay more for better-quality speakers.

There is an increasing number of external sound modules available that connect to laptops using a vacant USB port or ExpressCard slot. Examples of these modules include  Creative’s Sound Blaster X-Fi Go Pro and Sound Blaster X-Fi Surround 5.1 Pro.

Most such modules work as full external sound cards which connect to a line input on an external sound system or a pair of powered speakers, with some having their own power amplifier so they can drive a set of regular speakers themselves.

But an increasing number of these devices have a coaxial or optical SPDIF digital output which passes a digital signal stream to a home theatre receiver, digital preamplifier or similar device either as a PCM or Dolby Digital bitstream. This connection is usually to permit playback of surround-sound content like game soundtracks through Dolby-Digital-equipped home-theatre receivers; but can allow you to exploit hi-fi-grade digital-analogue circuitry in the good digital-enabled sound equipment. 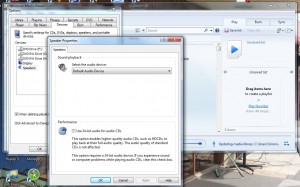 You can select a sound-output device for Windows Meidia Player

These devices present themselves to the operating system as an extra sound device and you would have to set your media-playback software to use these devices if you want the sound coming out of the speakers that are connected to these modules. This can be done through the “Options” or “Preferences” menus in the media playback software.

They, like the add-on sound cards installed in desktop computers, offer improved sound quality for most laptops due to having improved dedicated sound circuitry in them. Some of these modules are made for use with high-quality audio applications and may have input circuitry that also works with good-quality microphones, electronic musical instruments or good-quality equipment. They are usually targeted at professional musicians, production recording, broadcast and similar applications and are very dear; but are worth their salt if you place high value on sound quality.

Connecting USB speakers or external sound modules to your computer

Most of the USB speakers or sound modules present themselves as a “class device” to the computer’s operating system. This means that computers running Windows, MacOS X or Linux won’t need you to install driver software in order to have the audio device run. Some of the speakers or sound modules may require the use of manufacturer-supplied software in order to enable device-specific advanced functionality and this would be on a CD supplied with the hardware or available from the manufacturer’s site. 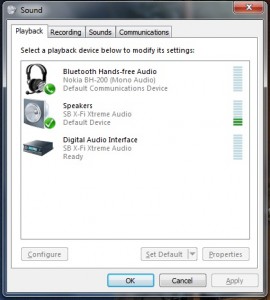 All sound-output devices in Windows 7

They will typically present themselves as another sound-output device or “sound card” which you can select in your operating system’s sound-configuration menus. It is also worth noting that most media-playback software and some games can allow you to choose the audio device that you want the program to use. This can allow you to use the regular sound setup like a laptop’s integrated speakers for audio prompts while a good-quality USB sound module connected to a good amplifier and speakers is used for music playback from Windows Media Player. Other programs may require you to change your default sound output device, which means that all the sounds, including the audio prompt sounds will come through the good-quality audio playback setup.

Once you know what to buy, you can then choose the right audio equipment to bring life in to your laptop’s, smartphone’s, Internet radio’s or other device’s sound output.