I am reviewing Dell’s value-priced 2-in-1 laptop computer, the Inspiron 14 5000 which is positioned as a mid-tier computer for this class.

There is a model in the lineup that costs under AUD$1000 which has the Intel i3 CPU,  4Gb RAM and 256Gb SSD storage. I would see this as being of value for most users who are dabbling in the idea of a Windows-based 2-in-1. 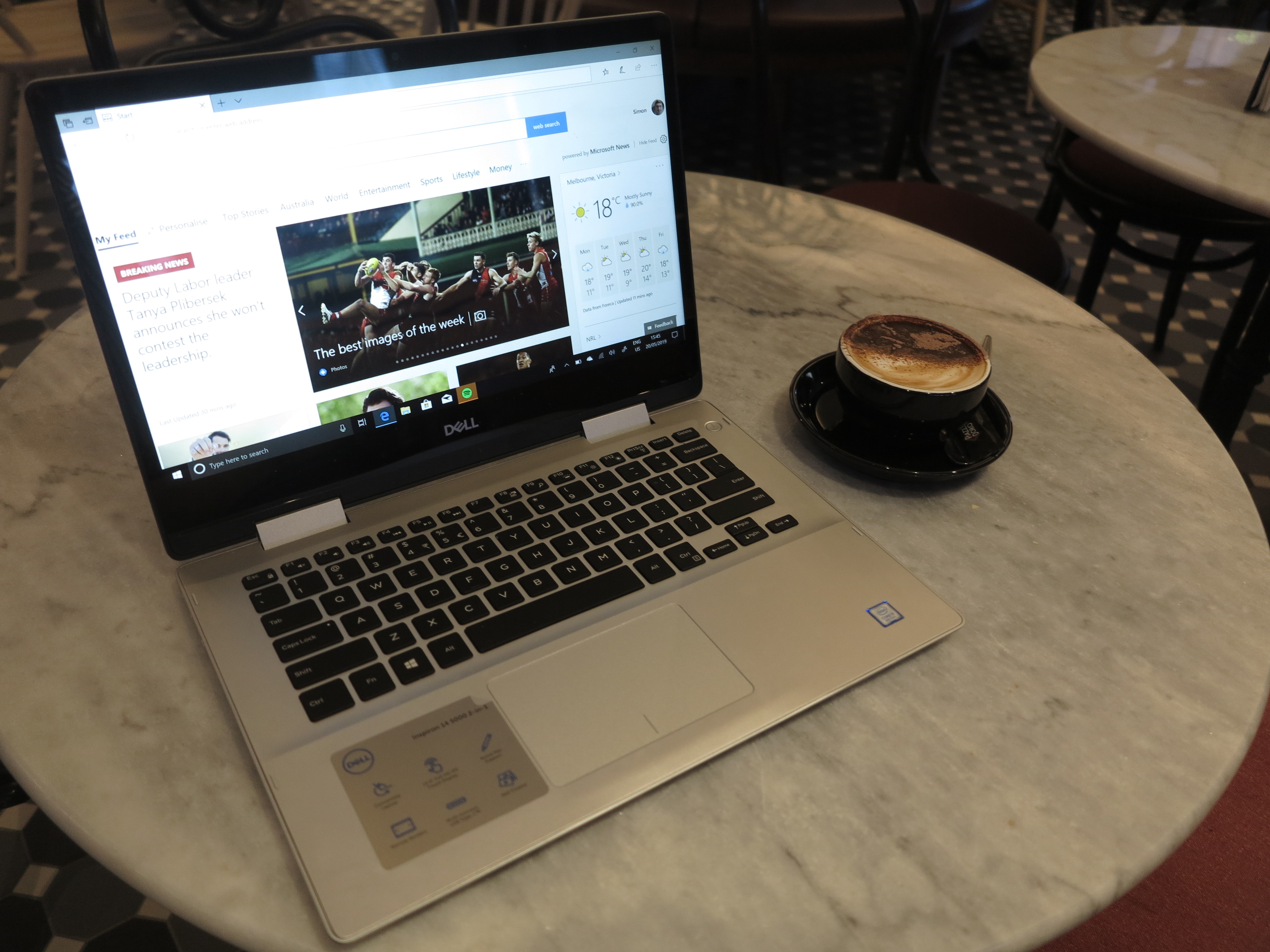 The Dell Inspiron 14 5000 has a very similar styling to most of today’s laptops with the grey housing and black keys and screen escutcheon. It doesn’t come across with a cheap-looking finish.

This computer doesn’t come across as being flimsy. It can work smoothly between the different setups whether it be a tablet, tent mode or the traditional laptop setup. Here, you don’t need to exert much pressure on the lid and it moves very smoothly. A problem that can occur if you use it in viewer mode is that if you put a bit too much pressure on the screen, you can find that the screen collapses too quickly. This may be of concern for those of us who attempt to type with the on-screen keyboard.

There is venting along the back and on the bottom of the keyboard unit. In normal use in all modes, I have noticed that the Dell Inspiron 14 5000 hasn’t built up any heat or become too hot to be comfortable.

The illuminated keyboard on the Dell Inspiron 14 5000 2-in-1 looks like what is expected for most of the value-priced consumer-grade laptops. It has the tactile feel that is expected for most modern keyboards and you still have the ability to touch-type accurately. The illumination could be improved through the use of an “on-demand” mode to prevent the keyboard lighting up longer after you stop interacting with it and this could come in to play while the unit is running on batteries.

The trackpad on this Dell Inspiron 2-in-1 has the full precision ability which allows for multi-touch operation as expected for relatively-modern laptops. The touchscreen is also responsive and accurate as expected and isn’t easily triggered by you typing on the keyboard.

Unlike some very cheap Chinese-built 2-in-1 convertible laptops, the Dell Inspiron 14 5000 disables the keyboard and trackpad when it is placed in a tablet, viewer or tent mode. This means it fulfils the expectations of a 2-in-1 convertible and you don’t have accidental operation.

An improvement that I would like to see for use in any of the “tablet” modes would be to have a power switch and volume buttons located on one of the sides of the screen. This could allow the user to quickly shut the unit down or adjust the sound output when it is used as a tablet or a viewer setup. 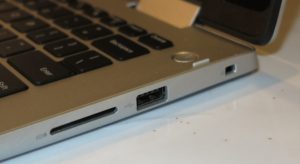 Dell has implemented the Waves MaxxAudio sound tuning but this doesn’t really improve the sound quality especially for music when you use this computer’s speakers. This is still a problem with laptops because of the shallow cramped design that is part of their construction. Here, I would recommend the use of headphones ore external speakers if you want more out of these computers.

The Intel UHD 620 integrated graphics performed properly for handling Web video but I have done further research on this graphics subsystem. Here, it is able to be an all-rounder for most tasks including some gaming where you aren’t critical about its performance. The high-end variant with the NVIDIA discrete graphics infrastructure would come in handy if you are wanting performance for gaming or photo and video editing.

Dell has done the right thing for battery life by keeping the display resolution for the integrated display at Full HD rather than offering a configuration with a 4K UHDTV screen resolution. The DisplayPort via USB-C connection option can come in to its own for higher resolution computing needs when you have this computer teamed with an external monitor or TV of that resolution.

This computer, like most of the configurations of the Dell Inspiron 14 5000 comes with the 256Gb solid-state storage. This is while one of the configurations equipped with 8Gb RAM comes with 128Gb. It can work well for most “secondary-computer” applications but could be made as an across-the-board baseline. As well, a 512Gb solid-state drive could be offered as a premium option.

The solid-state storage that serves as the Dell Inspiron’s system disk is augmented by a full SD card reader that can work with the standard SD cards. This means that you could load your photos from your digital camera in to your computer without the need for using an SD-card reader.

The RAM capacity satisfies most needs but a 16Gb RAM specification could be offered as a premium option especially for units kitted with the i7 CPU.

The Wi-FI does come across as being strong and quick for most of today’s Wi-Fi networks and hasn’t been much of a worry. The Bluetooth connection also worked properly with my JBL headphones and is a feature that is to be made use of on a laptop for private listening or wireless keyboards and mice.

The USB connectivity does suit most needs including having a USB-C connection with DisplayPort alt and Power Delivery support. Here, it can play well with setting up a USB-C monitor or dock as the heart of a laptop-centric desktop workspace where you are implementing an external monitor, keyboard and mouse.

The two traditional Type-A connections on the left work to USB 3.0 specifications while the right-had Type-A connection works to the 2.0 specification. This can come up as a problem if you are using high-performance plug-in USB peripherals like USB modems that answer high-bandwidth mobile broadband services or USB memory keys with high storage capacity and high performance.

There is also an HDMI connection for existing flatscreen TVs and monitors when you want the second screen, while you have the 3.5mm audio jack for connecting headphones or speakers for better sound.

The Dell Inspiron 14 5000 2-in-1’s integral battery can satisfy a workday of ordinary text-based computing. This is even if you do your computing totally online such as Web-surfing on your home network or at a Wi-Fi hotspot.

Online video streaming for 90 minutes with full-screen video and the sound via a Bluetooth headset allowed the battery to run from full capacity to half capacity. You may find that you have to use an external power supply like a USB-C PD battery pack or the computer’s supplied battery charger if you are considering full-on binge-viewing or similar activity for over two to three hours flat-out.

I showed the Del Inspiron 14 5000 2-in-1 convertible to the chairman of the Men’s Shed that I go to regularly and he found that the screen size was “just right” – not to small or too big. Another person who is involved in business IT saw this computer as being suitable as a general-purpose household or personal computer where you are not asking for anything special in performance or security.

As well, I had used the Dell Inspiron 14 5000 2-in-1 during the broadcast of the Australian Federal Election vote count. Here, I found that the tablet mode worked very well for using the computer as a “second screen” in this context.

A feature that I would like to see with the Dell Inspiron family of value-priced 2-in-1 laptops is for one or more variants to be equipped with the Thunderbolt 3 connector. This is more so on machines that are targeted towards affordable price segments due to the fact that they could be optioned up for better graphics with an external graphics module.

It could also be a good idea to implement USB 3.0 for all of the Type-A connections on this computer. Here, it can be of benefit to users who are likely to use two unwieldly-sized plug-in USB 3.0 peripherals that have a large form factor like some mobile-broadband modems or high-capacity USB memory keys.

Another feature that would work well for this class of laptop is to have a power switch and volume buttons installed on the edge of the screen. This can simplify the process of regulating the volume or quickly turning off the laptop when you are done.

The illuminated-keyboard feature could have an option to work only while you are working with the keyboard with it turning off a few seconds after you stop using the keyboard. This can be a way to allow for improved battery runtime.

The Dell Inspiron 14 5000 series 2-in-1s fills the gap for a convertible notebook that suits the needs of most householders without sacrificing performance for most computing tasks. This includes using it as a second screen or viewing online video, with the fact that the 14” screen keeps the idea of a highly portable computer alive while maintaining a larger screen.

This model even has some configurations that suit a budget user, someone who wants an all-round performer and someone who is after improved graphics performance.

I would make sure that Dell keeps the Inspiron 14 5000 series of 2-in-1 laptop computers as a value-priced product that suits most users and to keep one model with some desirable specs at an affordable price point. Here, it could be about preserving a lineup of 2-in-1 convertible laptops of different screen sizes, powertrains (CPUs, graphics processors, chipsets), RAM capacities and storage capacities under the Inspiron banner in order to make this computer class affordable for most users.