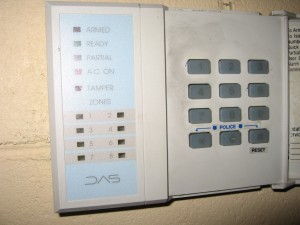 The monitored alarm system could be sold as part of your telephony, cable TV and Internet service

AT&T has just become one of the first main telecommunications companies to offer the concept of home security and automation to their customers. Initially this service will appear in 15 markets after they thought of eight markets. They will then achieve a goal to have 50 US markets switched on to this service by end of 2013. This is although a handful of ISPs including a few French and British operators are running home security and automation as the “fifth play” service.

This service, known as AT&T Digital Life will feature the 24/7 monitored alarm service which will let you and the police or fire brigade know about emergencies including where they occur in your home like what most monitored alarm systems are capable of doing. As well, the service will let you manage and control home security and automation functions through the use of programs and alerts including non-time-specific events such as you opening the garage door causing lights to come on or the heating or cooling to be adjusted to the “comfort” setting.

What would typically happen is that the telcos and similar firms would resell monitoring services from established alarm-monitoring companies like ADT and Chubb. Then they would integrate the control functionality through a Web dashboard that has their branding on it. This could easily be facilitated through the security monitoring firms that the telecommunications or cable-TV firm engage to protect their premises having their business relationship strengthened by being in a position to wholesale the service to the telco’s retail customers.

Similarly the wired-broadband link provided by the telco, rather than a separately-sold link could end up as the monitoring link. This can be augmented with the use of a wireless-broadband link sold to the customer as the mobile solution for an “eggs in one basket” deal serving as a fail-safe link.

I would be observing which ISPs, telcos or cable-TV providers would offer one or more home-security and automation packages as an attachment to a multiple-play ( fixed and mobile) telephony, TV and (fixed and mobile) Internet service package. Here, I would observe whether these services are broadly advertised across common media like the TV ads or large display ads in the womens’ magazines and local newspapers.

If the marketplace for “triple-play” Internet service is so cut-throat, what can a telco, cable-TV firm or ISP offer to their loyal customers to increase service value? Could it be an Internet terminal like a T-Hub, or an Internet-connected device like an online picture frame or Internet radio?

No, it is another service that customers have previously bought through separate providers with names like Intamac or Chubb. This service is home automation and security, with monitored alarm systems and Internet-driven energy dashboards for residential users.

These solutions will typically link to servers or monitoring stations via the Internet link that the telecommunications company provides as part of the package. In some cases, there may be home-automation / security services that work “wholesale” and engage the telco or ISP as a reseller like they do with people like alarm installers. This is with the main goal of having these services available as an extra-cost a-la-carte option or as part of one or more premium communications service plans.

People in the security industry may discredit this move because of reasons like lack of “alarm-event response service” with security guards responding to alarm events, deployment of cheaper “quick-install” hardware rather than fully-installed systems, amongst other things. As well some of them may discredit single-box security/home-automation “panels” that can yield a single point of failure for both these functions.

The example cited in the DegroupNews news article is Bougyes Telecom providing a basic DIY system that links to their Bbox Internet gateway and uses a wireless link to the various peripherals.

This is available in two packages, with one focused on energy monitoring and remote control of appliances and the other focused on security, comfort and energy monitoring/ remote control. The first package, costing EUR€5 per month,would come with a home-automation “base”, a few plug-in appliance controllers and an electricity-meter interface which works with the newer smart meters being deployed in France. The second one, costing EUR€9 per month, has extra sensors for temperature and humidity, PIR motion detectors and a magnet-reed door-contact sensor; with the ability to send an SMS alert in case of alarm conditions.

This effort of ISPs and telcos providing home automation could make the concept become mainstream and appealing to most householders. This is rather than the DIY “tinkerers” who have the time to mess around with these systems or rich people who own pimped-out “MTV Cribs” and have the money to have professionals design highly-customised home-automation systems.

For this to work effectively, the hardware and software infrastructure needs to work with known standards in order to permit these systems to be evolved through their long lifecycles. As well, these systems must work in a manner where they “just work” properly and exhibit graceful degradation to primary functionality when other systems in the network or key network links fail.

As well, a professioally-designed system must be able to be “re-worked” by other knowledgeable professionals or the householder. This is so that if anything happens with the regular or original installer, the system can be kept in good working order or evolved to newer needs.

I would think that the trend of telecommunications companies and Internet providers providing home automation and security services will become an interesting trend to observe.