I am reviewing Hewlett-Packard’s latest business inkjet multifunction printer which is the OfficeJet Pro 8600a Plus. This unit is to supersede the previously-reviewed HP OfficeJet Pro 8500a Plus and, as you will see later through the review, will have some improvements over that model, especially the ability to print on both sides of the paper “to the edge”. 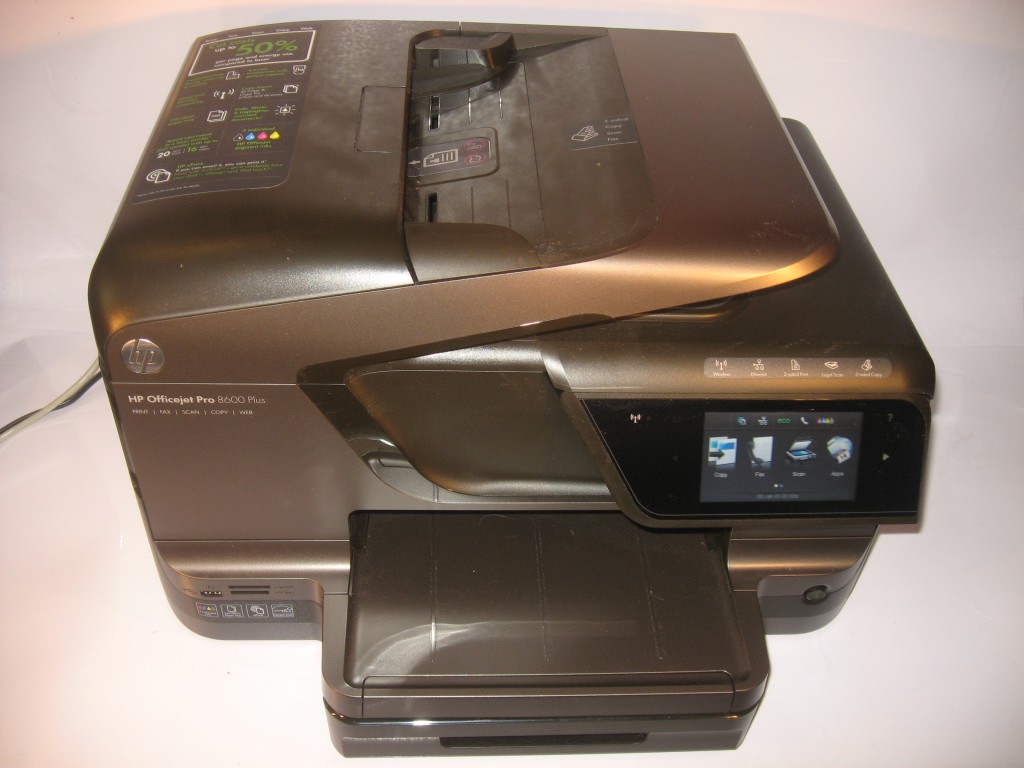 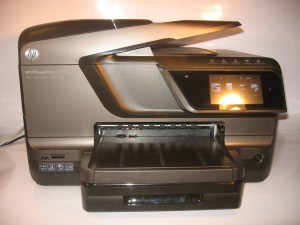 Of course, the feature that makes the HP OfficeJet Pro 8600a Plus identifiable is the single-piece automatic document feeder design. Unlike most multifunction printers which use a removable or fold-over document input tray, this printer implements an integrated input tray, which creates a stylish design and reduces the need to do any further setup.

The HP OfficeJet Pro 8600a Plus was very easy to set up and add to the network and can connect to a Wi-Fi wireless or a wired Ethernet network. Like most business printers, it is future-proof with dual-stack IPv6 support, which would certainly benefit businesses who are heading down this next-generation network setup or are considering next-generation broadband.

When I wanted to enable the OfficeJet’s ePrint functionality, the printer failed to download the whole file completely and properly. Typically this was caused by server timeout problems and the printer would take the necessary “anti-brick” procedures too readily. This could be improved through the use of background downloading for the necessary software, especially if the update was part-finished.

The HP OfficeJet Pro 8600a Plus can work as a copier with the ability to copy both sides of a document very quickly, a speed slightly shorter than its predecessor. There is also an ID copy function which is supported by assistance animations on the unit’s LCD.

Of course, the OfficeJet can print from and scan to memory cards or USB memory keys, thus working as a standalone printing appliance. In addition, the printer can scan documents either to an email address or a network folder, but these require the use of desktop software to configure these services for your network. As far as scan-to-folder is concerned, the printer can work with any network-storage setup that uses the standard protocols like SMB, which means that it can scan to a NAS device as well as a server or regular computer.

The unit has an integrated colour fax machine for use with regular telephony services with the ability to forward faxes to email or store them on a network storage. The main limitation with using this function for remote “scan-via-fax” operations is that you are typically limited to 300dpi black-and-white images due to the limitations of the Group 3 fax technology.

The HP OfficeJet Pro 8600a Plus’s computer software loaded very smoothly and worked as expected for a printer that is to be part of the Windows 7 ecosystem. This included support for the Device Stage functionality and integration with applications that have distinct control over the printer.

The software is still very useable and works well with the operating system in an unobtrusive way. There is the ability to set the printer to scan to the computer or to storage on the network like a NAS. This latter situation requires the use of utility software that is supplied as part of the printer for setting up the scan destination. The same software can be used for setting up scan-to-email destinations. But if you set up a scan-to-computer arrangement, the software’s scan monitor works very unobtrusively. 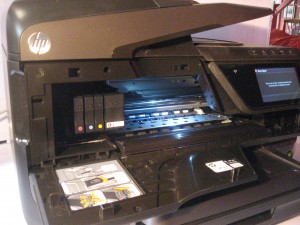 This printer has its ink cartridges loaded from the front in a similar manner to its predecessor and the Brother inkjet printers. But the similarity stops here. When you drop down the access door to gain access to the cartridges, the print bay is illuminated so you can easily identify paper jams. This makes the printer much more easily serviceable compared to the typical laser printer.

A feature that makes the printer identifiable is the single-piece automatic document feeder design. Unlike most multifunction printers which use a removable or fold-over document input tray, this printer implements an integrated input tray, which creates a stylish design and reduces the need to do any further setup.

Similarly there is a pull-out paper drawer which is easy to load and has a high capacity. There is the option to buy an extra paper drawer for use if you want to keep different media on hand.

The OfficeJet Pro 8600a’s automatic duplex printing was a major improvement over the previous HP inkjet printers with this feature in that it could effectively print on both sides of the sheet without requiring a large top and bottom margin. This previous requirement has been a personal annoyance of mine with other auto-duplex HP inkjet printers especially when turning out double-sided “tear-off” flyers to promote this site, and this model was effectively a sigh of relief for this function.

This would be especially of benefit for those of us who place importance on auto-duplex printing for desktop-publishing needs like turning out short-order flyers or previews of documents intended for long-run printing. It can even benefit print runs of custom-shaped documents like door hangers, luggage labels, bookmarks and the like.

There has been an improvement in the duplex print speed with a reduced waiting period while the ink dries, but this could be worked on further. One way this could be looked at is to identify whether the page can be retracted slowly during the estimated ink-drying time.

This HP OfficeJet Pro 8600a was able to complete a large duplex print run without failing and the reduced dwell-time for ink drying had become a bonus in reducing the time it took to turn out the pages.

The document output is very sharp for an inkjet printer, very close to what is achieved for a laser or LED printer. But this printer shone with the photo reproduction, something that a lot of business colour printers that are pitched at regular office use may find hard to do. Here, the photo reproduction has been an improvement over the previous model, the OfficeJet Pro 8500a Plus.

I have noticed that the HP OfficeJet Pro 8600a Plus is a real and distinct improvement on the OfficeJet Pro 8500a Plus predecessor in quite a few ways. It was able to reproduce photographs in an improved manner, which would make it please real estate agents, marketing agencies and similar businesses that depend on proper colour photo output for proofs, short-run colour flyers and similar documents. The auto-duplex printing function was an improvement on the previous model in that the pages were reproduced “to the edge” without a large enforced margin, similar to competing printers.

It also has a slightly-increased theoretical ink yield compared to the previous model, thus effectively making it cheaper to run and less time between restocking the ink cartridges.

The HP OfficeJet Pro 8600a printer could benefit from increased paper handling options like an extra low-capacity tray for use with ad-hoc media like letterhead, labels or plastic film when used for short runs. Similarly, it could benefit from being integrated with single-pass duplex scanning as an advanced feature, thus allowing for quick-throughput reliable double-sided scanning.

The ePrint functionality could be delivered out-of-the-box rather than having the user run a firmware upgrade. While on the same topic, firmware updates could then be implemented in a “block-by-block” fashion so that the OfficeJet doesn’t need to download good firmware when completing an aborted firmware update.

It could also implement T.37 and T.38 IP-based fax endpoint functionality and UPnP printing as extra functions to make for a highly-capable small-business printer. These are functions that could be enabled and managed on the printer’s Web dashboard. 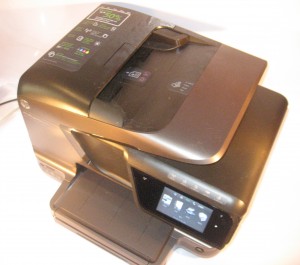 I would recommend the HP OfficeJet Pro 8600a Plus multifunction inkjet printer as a colour inkjet workhorse for the office. This is more so if you do intend to print photo-based documents like photo proofs and short-order brochures.

Similarly. I would also recommend it for people who also value printer capacity and media flexibility, thus placing it as a more credible small-office-based alternative to an entry-level colour laser multifunction printer.