I am reviewing the Hewlett-Packard Pavillion DV7-6000 Series of 17” desktop-replacement multimedia laptop computers. The actual model that I am reviewing is the DV7-6013TX which is the top-end model of the series. The only differences between this and the other models in the series are the processor type, the hard-disk capacity and the optical-drive type.

One factor I am considering in this review is how these computers stand against the Dell XPS L702X, a similarly-equipped desktop replacement laptop which I recently reviewed. Both of these computers are driven by Intel second-generation “Sandy Bridge” chipsets which have integrated CPU/GPU processors.

HP logo reflects when the computer is turned off

But there is a finishing touch that hits at the Apple MacBook range very squarely. Here, the HP logo located on the bottom left of the lid reflects like a mirror when the unit is off but glows like the Apple logo on those MacBook computers when it is on. It wouldn’t be noticed as readily as the Apple logo that is positioned on the centre of the lid on those computers.

HP logo glows when computer is on

Whatever, it leads to a well-built computer that doesn’t feel flimsy in any way.

The HP Pavillion DV7-6000’s keyboard is a similarly-styled chiclet keyboard to the Dell L702x but isn’t illuminated. This is infact a common keyboard style used on most laptops nowadays. The keys are a short-throw variety which may allow for quicker touch-typing but may affect user accuracy.

There isn’t an option to determine whether pressing a key on the function-key row activates the laptop functions or a Windows-defined function like F5. Here, you would have to hold down the Fn key to select a Windows operating-system function.

The trackpad has its own area with separate primary and secondary buttons. This is even made easier with a white “neon-effect” ring surrounding the trackpad area. There are no speaker or other grilles on the palm-rest area that can be masked by your palms thus affecting the sound quality of cooling performance of this computer.

Another feature that the HP Pavillion DV7 has is a fingerprint scanner that is supported by Windows as a login measure. But this requires the computer to run HP software for the functionality to operate. 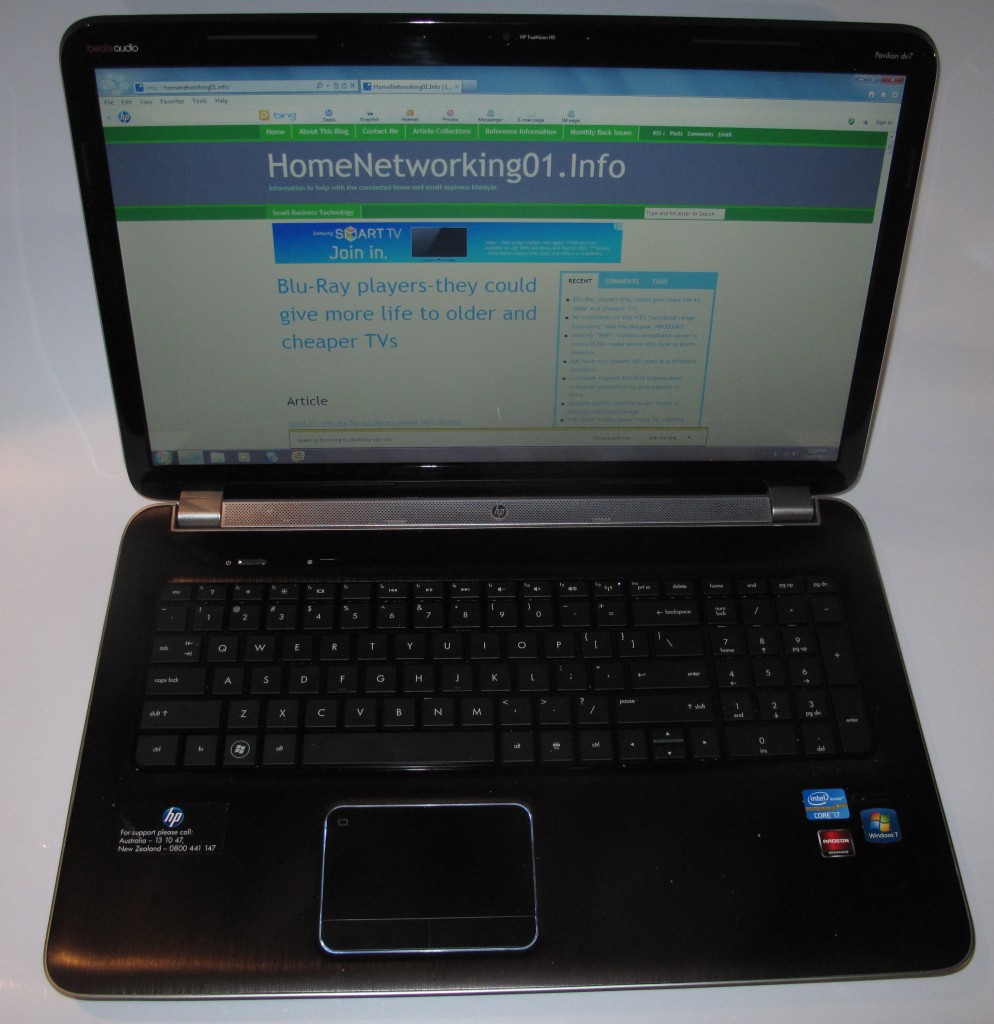 The Pavillion DV7-6000 Series laptops are equipped with dual-mode graphics with Intel HD “Sandy Bridge” graphics in power-saving “economy” mode and AMD Mobile Radeon HD graphics in “performance” mode. Unlike switching a car’s transmission between “normal / economy” mode and “sport / performance” mode, these computers require all of the applications to be shut down before you change graphics modes. This will take a few seconds to occur during switchover and the unit will suggest the operating mode to use as you change between external power and inbuilt-battery power.

The screen is a 17” LED-backlit unit which works at 1600 x 900 resolution. It could benefit from having a full-HD 1080p resolution screen even if it is offered as a differentiation option. This is compared to the Dell XPS L702x which had the full HD screen as the high-end model option.

This laptop is another example of a laptop that has its audio-playback subsystem “worked” by a company who has had strong involvement in sound recording and/or reproduction. Here, the goal of this involvement is to move away from that lifeless tinny sound that typically emanated from most laptop computers and yield some decent room-filling sound that was easy to understand.

In this case, the job was done by Dr Dre’s “Beats Audio” team, who have worked the sound subsystem in the HP Envy 15 that I previously reviewed. This uses a 2.1 speaker configuration with a separate bass driver. Like the JBL improvement in the Dell XPS, this has allowed the computer to deliver room-filling sound without a that horrible “tinny” sound output common to most laptop computers. It is also worth knowing that the stereo speakers are actually placed above the keyboard so your hands don’t obstruct the sound while the computer is in use. The visual evidence of this is an aluminum grille at the top of the keyboard, between the hinges.

Some benefits I have noticed when I watched some conference videos on this computer was the clarity of the sound recorded in the video including incidental traffic sound. As well, the voices of the speakers had more of the “personal depth” in them, whereas a lot of laptops would have the voices sound like an AM radio announcer as heard on a low-end pocket radio. As well, when I played “Munich” on this computer, the soundtrack had some depth with it especially with the sound effects.

The dual-mode graphics also allows the HP Pavillion dv7-6013TX to work for a longer time on its own batteries, especially if you are doing basic computing tasks like emailing or word-processing. Here, unlike most other laptops with discrete graphics, I had noticed that the battery wasn’t running down as fast

I had done a mixture of activities on this computer; including copy-editing and viewing of videos from a “connected-TV” conference. Yet I was able t get at least two hours of battery life out of this activity. This is although I was running the computer on the Intel graphics mode.

It was able to play through a feature-length “cinema” movie with 11% battery charge remaining at the end of the credits while on the Intel power-efficiency mode while the Wi-Fi connection was alive. This shows what the Intel Sandy Bridge chipset was all about when they promised the power efficiency for graphics-intensive tasks.

The HP Pavillion DV7 doesn’t run hot as easily as a lot of the laptops that I have used. Even if the fan is run at full pelt, it makes use of the grillework on the left side and the top of the base to permit proper cooling. It may be unusual for a laptop that doesn’t have a battery “lump” or kickstand that positions it at an angle, something I have seen with a few other laptops like the Dell XPS or the HP Probook 4520 stablemate.

The DV7-6000 Series could benefit from a 1080 Full-HD screen especially if it is to be used for preparing or viewing Full-HD content. HP could also implement a higher-performance ATI Mobility Radeon discrete graphics chipset in the higher-end model as a key product differentiator. As well, it could support dual-band Wi-Fi networking in markets where this is permitted.

The HP Pavillion DV7-6000 Series laptop computers are another laptop worth considering if you are moving towards a laptop-focused “New Computing Environment” for your home or small business. Similarly, it could serve its purpose as a “work-home” laptop for business owners who primarily use it in the home or workplace and primarily travel by car. Some people may find these computers being suitable for their needs if they “live out of the car boot” and frequently drive to and stay at another person’s place for nights at a time.

This may not be as strong a performer as the Dell XPS L702X but would win on memory capacity across the series (8Gb for all models) and the mid-tier and top models having 2Tb hard disk space and Blu-Ray writing. On the other hand, this level of performance may suit most average games players or most multimedia tasks.