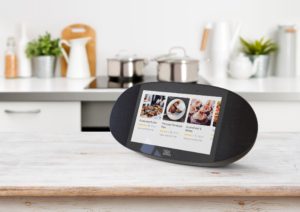 JBL have taken advance orders on this speaker since Wednesday 2 August 2018 (USA time) with them costing USD$250 a piece. They expect to have them fully available in the US market by September 3 2018 (USA time). The display on this unit serves the same purpose as the one on the Lenovo Smart Displays where it simply augments your conversation with Google Assistant using a visual experience.

These units look a bit like a boombox or stereo table radio and have an 8” high-definition touch screen along with two 2” (51mm) full-range speakers separately amplified and flanking the screen for stereo sound reproduction. Here, this traditional approach with the stereo speakers at each end of the device leads towards better perceived stereo separation. CNET saw this as offering more “punch” for music content compared to other “smart-display” devices that they experienced.

There is the camera to work with Google Duo but this device has also been designed to take care of user privacy needs thanks to a privacy shutter over the camera along with a microphone mute switch.

Like other Google Assistant (Home) devices, the JBL Link View can work as a wireless speaker for Chromecast Audio and Bluetooth links from mobile devices.

This is the start of something happening with the Google Assistant (Home) platform where the devices being offered by Lenovo and JBL are offering more than what Amazon are currently offering for their smart displays. It includes the stereo speakers for the JBL Link View along with larger displays for both the Lenovo and JBL products. LG and Sony are intending to launch their Google-powered smart displays soon but I don’t know when.

Personally, I would see Amazon and Google establishing a highly-competitive market for smart speakers and allied devices especially if both of them answer each other with devices of similar or better standards. As well, licensing the Alexa and Google Assistant (Home) standards to third-party consumer-electronics companies will also open up the path for innovation including incremental product-design improvements. 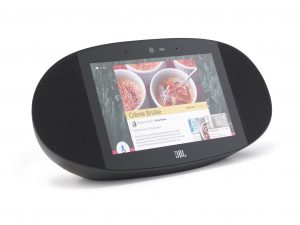