I have read the attached article and found that most of the devices had impressed me as devices that would work well in a home or small-business network. This was because of particular abilities that had made the devices unique rather than run-off-the-mill devices.

This group of NeoTV network media players may be very similar to the other network media players  like WDTV Live that are appearing on the market. This is that they are capable of playing audiovisual media held on a USB memory key, camera card reader or external hard drive; or from a DLNA/UPnP-AV-compliant media server that exists on your network. But one of the models in this lineup, the NeoTV 550,  has eSATA connectivity and the ability to be a Blu-Ray Disc player when connected to an optional eSATA-connected Blu-Ray drive. This can benefit people who want to consider running this unit alongside their DVD player as a network media player but may take the plunge for Blu-Ray when they are ready.

At the moment, I am not sure whether this unit can work as a substitute DVD player if it is connected to an eSATA or USB DVD drive or a DVD is loaded in to a connected Blu-Ray drive. 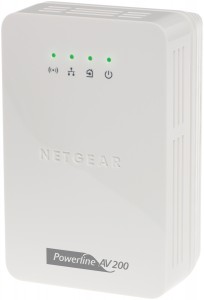 This device can work as a way of extending the effective radio footprint of an 802.11n wireless network with the use of an Ethernet or HomePlug AV wired backbone. On the other hand, it could bring an 802.11n wireless network and Ethernet network point in to an outbuilding or static caravan (trailer) in the manner talked about in my feature article “Multi-Building Home Networks”.

I had done further research about this access point through Netgear’s Web site and found that this unit uses WPS as a way of simplifying the creation of a multiple-access-point wireless-network segment. This kind of segment, also known as an “extended service set” makes use of multiple access points with the same SSID, network operating mode and security parameters so a portable device can move between access points with minimal user intervention. I have written a bit about the concept of using WPS as a way of simplifying setup of a small multi-access-point wireless network in an article I had posted last year on this site at its old location and had moved to the current location.

The user just has to hold down the unit’s ON-OFF button for a few seconds then press the WPS button on the WPS-ready wireless “edge” router to start the configuration routine. A few moments later, they are then able to move the access point to the area where the Wi-Fi network is needed and proceed to connect this access point to the Ethernet or HomePlug AV backbone which the wireless router should be connected to.

If more manufacturers can look towards making affordable and easy-to-use network devices, they can end up with equipment that will appeal to most users and have equipment that is out of the ordinary.