I am reviewing the Brother PT-E550WVP TZe-compliant handheld label writer which is pitched at electricians, AV and IT technicians and similar folk who work with different equipment.  This ranges from those who work out of the back of their trucks or vans to the maintenance and IT departments of different workplaces.

One feature that it has beyond the typical label writer is that it can work with other computer equipment via an existing Wi-Fi network segment or its own Wi-FI network. This allows for you to order labels on your smartphone or tablet and have it turn them out. 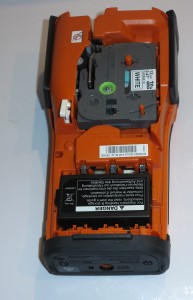 Where to install the battery and the label tape

The Brother PT-E550WVP label writer is a large handheld device which has a heavy-duty build and an orange-and-grey housing. It is equipped with a large dot-matrix backlit LCD display that lights up when you are actually using the device, along with a rubberised keyboard.

To load the batteries or label tapes in to this label writer, you have to remove the back cover from this unit by pressing a latch on the top edge. Here. you have clearly-identified compartments at each end of the device for the batteries of the tape.

It has what some people may describe as a “three-way” power supply arrangement where you can run it on mains power courtesy of a supplied AC adaptor/charger, a supplied rechargeable lithium-ion battery or 6 AA alkaline batteries of the Duracell kind. This means that even if you run out of power from the rechargeable battery while on the road, you can go to the convenience store and buy some batteries to complete that labelling project. Here, charging the unit’s lithium-ion battery pack is simple as plugging the unit in to mains power using the supplied AC adaptor. 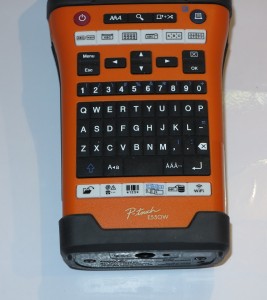 The Brother PT-E550WVP label writer is based on Brother’s TZe label-cassette platform which means that it can work with all of Brother’s TZe label products which suit different purposes. This includes their HSe series of heat-shrink label tubes that you use to attach to cables.

This label writer has quick access to label templates that are optimised for labelling cables, patch-bays, outlets and the like which can make it an electrician’s or maintenance engineer’s best friend.

As for on-device data entry, the large display makes it easy to see what you are typing in on the unit’s QWERTY-layout rubber-membrane keyboard. The disadvantage with this keyboard is that all the keys are “bunched-up” together rather than spaced out like a calculator’s keyboard. This can be awkward for some users, but you can at least feel which keys are which because each key on the main keyboard has a hemispheric “pimple” shape.

The label writer doesn’t feel extra top-heavy while you are entering text and it still has that comfortable hand-held feel that is expected of this class of device.

You have a dedicated accent key which can come in handy for entering the accents common in most of the Latin languages. This may also appeal to those of you who are learning foreign languages and use labels attached to items as a tool to reinforce your vocabulary. Here, you press the letter you want accented then press the accent key repeatedly until the desired accent appears. In the case of the “ß” used in the traditional German orthography, you type the S letter then press the accent key until the “ß” letter shows up.

As for the output quality, the labels come out of this machine very crisp and clear as has been expected for Brother’s thermal labellers.

The Brother PT-E550WVP label writer can work as a label printer with a regular computer or a mobile device and can connect to the latter via Wi-Fi. This can be handy if you are wanting to run a batch of labels from your smartphone or tablet such as whenever you are out of the right label tape or you have left the label writer behind. Similarly, you can use this link to transfer databases or label templates created using the P-Touch software. 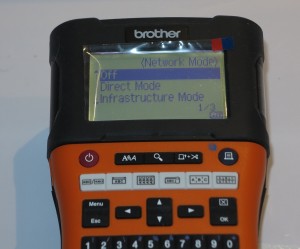 This model has answered a problem that was exhibited by Brother’s PT-P750W Wi-Fi label printer where it would attempt to connect to the last Wi-Fi wireless network it used before working as a standalone Wi-Fi wireless device. Here, the user has to select whether to run the label writer as its own Wi-Fi network or have it join an existing Wi-Fi network by using the WLAN menu option on PT-E550WVP’s menu and selecting “Direct” for working as its own network and “Infrastructure” for working with an existing Wi-Fi network.

Comments from other people

I showed the Brother PT-E550WVP label writer to a friend of mine who works as a maintenance electrician and let him have a play around with this device. He was impressed with this unit’s rugged design and ease of use. This was so much that he would suggest to his workplace to consider buying these labellers for the team he works with.

A feature that may be considered nice to have for the PT-E550WP would be to allow the label writer’s keyboard to serve as an external keyboard for a tablet or smartphone. Similarly, this labeller could benefit from an optional car adaptor so it can be charged up from the vehicle’s cigar-lighter socket when you are driving between jobs or want to conserve battery power when you work out of the back of your van.

Similarly, Brother can improve on the display’s contrast to augment its useability. Here, they could implement display technologies like EL-backlit LCD displays or monochrome OLED displays which have a similar contrast to the vacuum-fluorescent displays but don’t consume as much power as those displays.

A function that could come in handy for people who use this label writer as part of IT support would be to print out the SSID and, perhaps, the password of the current network. This may be useful for preparing a network-configuration card to give to the network’s owner or attach the SSID to the router or access point they have configured.

The Brother PT-E550WVP handheld label writer earns its keep for tradesmen and maintenance departments who value a highly-durable label writer and want to have the ability to link it with their portable computing equipment whether now or in the future. Personally, I would consider this label writer to be a viable tool for these kind of users rather than a toy.