I am reviewing the Dell Inspiron 15 Gaming laptop which is a gaming-optimised variant of their 15-7000 Series laptops which are considered as the top of their mainstream consumer laptop range. These traditional-style laptops are pitched towards students and other users who like the traditional clamshell look rather than a 2-in-1 computer because they are more likely to ask for the power and capacity that these units offer without going “full pelt” towards an aggressively-styled gaming model.

The Dell Inspiron 15 Gaming range of laptops are positioned in a similar manner to the “sports sedans / sports saloons” or “hot hatches” that most vehicle builders were inserting in to their popular passenger-car lineups for a long time to maintain appeal to younger drivers. But these vehicles were optimised for power, being powered by some powerful engines and equipped with gearboxes suitable for competitive driving. Such vehicles would exhibit some sporty detail work inside and out and tended to carry model-name suffixes that conveyed “GT” or “Sport” driving.

They underscore the high performance by offering a larger amount of system RAM for the processor class that what a typical laptop would offer for the processor class such as an Intel i7 CPU machine being kitted out with 8Gb RAM or an i5 or i3 CPU being matched with 4Gb RAM. As well, these computers are equipped with a discrete-graphics chipset known to offer very high performance for a mobile-class chipset. 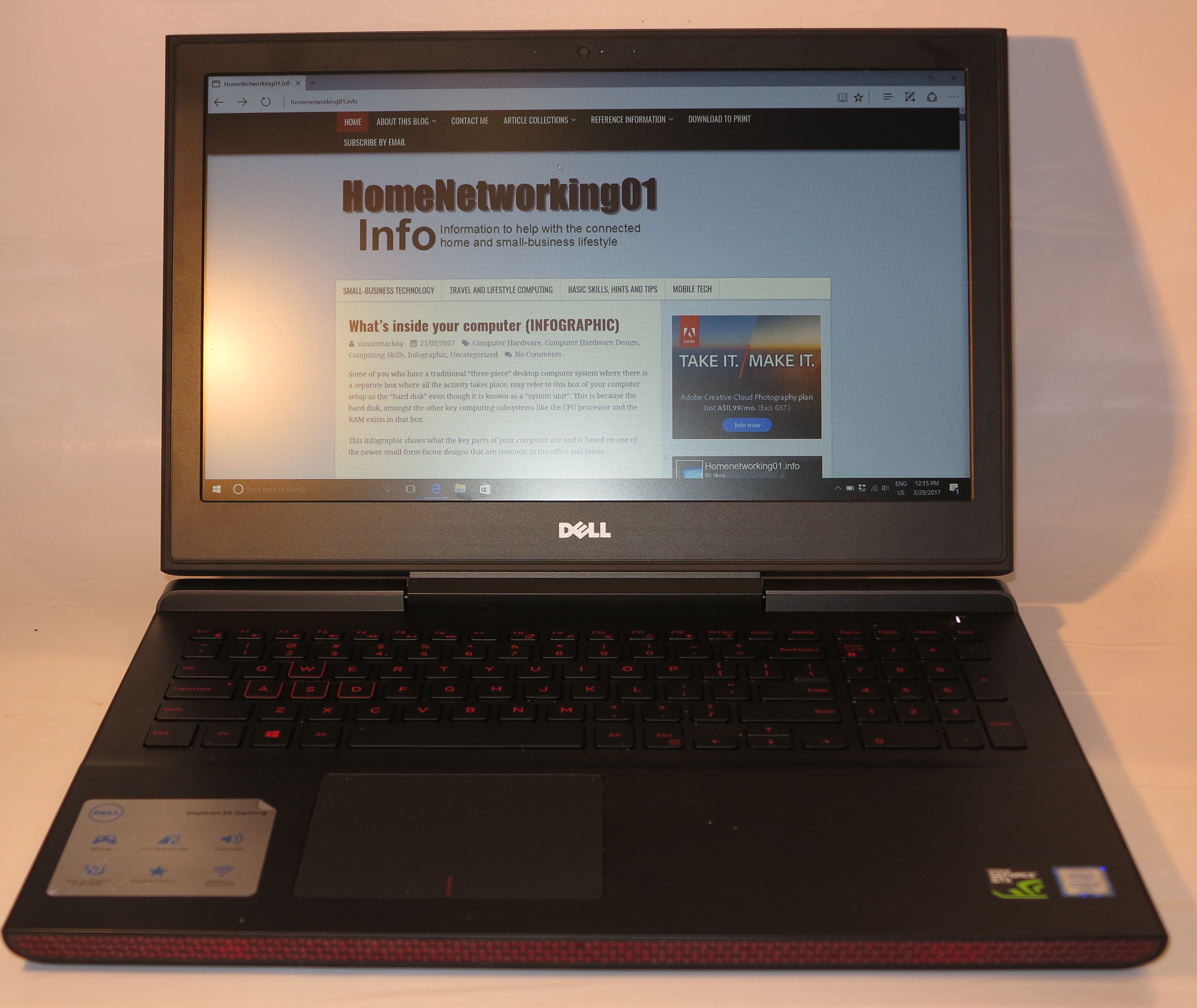 Where a computer of the same screen size and in the same product range is offered with different variations in its configuration, I highlight the options that the review unit has in boldface text and list the variations available for the computer under the review unit’s specifications, As well, I write whether the alternate specifications are cheaper options or come at a more expensive premium compared to what I am dealing with. 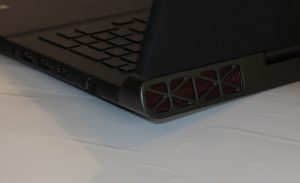 Rear vents to improve cooling for a high-performance computer

The Dell Inspiron 15 Gaming comes across as a relatively-heavy machine, with the extra venting on the back of the unit similar to the air scoops integrated in to the above-mentioned performance-tuned passenger cars. The venting is primarily to allow the machine to stay relatively cool even when playing advanced games, and also underscores that it is optimised for performance. But there is still a chance of heat build-up taking place and this can be felt from underneath the laptop.

The outside of the Dell Inspiron 15 Gaming is finished with a feel not dissimilar to rubber. This coveys that rugged look that is also about durability. But the finish has a disadvantage where it can easily look dirty and harbour stains associated with real portable use.

Another symbol of this computer’s durable construction is the use of a single thick hinge pin for the lid.  This makes the computer feel less flimsy to use when you open and close it.

There is a hard tactile feedback that the keyboard exhibits which conveys that it can work with a lot of data entry or game control activity. There is still that chiclet keyboard design with a similar feel across the keyboard which can make things awkward if you value touch-typing or similar tactile-driven operation. 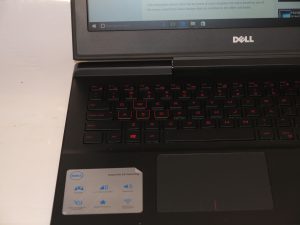 For gamers, the “W”, “A”, “S” and “D” keys are highlighted so you can easily control your game using those keys. This is more so for games where these keys actually are used to control the current game character while you use other keys for other control purposes like swapping the weapon or tool your character uses or changing the current game character. If you want to use the traditional function keys, you have to use the Fn key all the time but it could be made easier to add a dedicated “Fn lock” button to allow switching between traditional function keys or the media keys for the top row.

The multi-touch trackpad is highly responsive and works as expected. This is without it being too “hair-trigger”. Most gamers may find that a gaming-optimised USB or Bluetooth mouse or trackball may do the job better for navigating around the field of play.

I played a video clip hosted on Facebook using the Dell Inspiron 15 Gaming laptop and had found that the sound had come through clearly and with some “punch” in the hass. giving a fuller sound to voices as well as treating the music properly. The sound level would he strong enough for personal listening thou, and this is brought on thanks to the Waves MaxxAudio sound tuning.

The display could handle most video playing tasks, even fast-paced action, in a very smooth manner. The only problem I had with running video from Windows 10 Universal Windows apps is that I couldn’t push this infrastructure to use the higher-performance NVIDIA chipset over the integrated graphics to give it a real test. 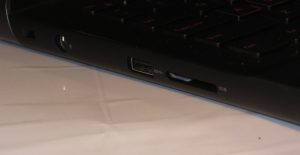 There are three USB 3.0 sockets with one that is capable of being enabled for “Powershare” sleep-and-charge functionality. This is where the Dell laptop can supply power to charge gadgets connected to that port, identified with a lightning bolt, while it is switched off and on its own batteries.

Let’s not forget that the Dell Inspiron 15 Gaming laptop has the ability to be connected to an HDMI display as its external display.

The premium version of the Dell Inspiron 15 Gaming laptop comes with a 128Gb solid-state drive and a 1Tb hard disk while the cheaper variant comes just with a 1Tb hard disk. This storage capacity is being maintained by Dell for most of their 15” mainstream laptops with the view of allowing these to serve well as a portable option for one’s main or sole computing device. Although, the computer doesn’t have much data beyond what is initially supplied with it, the hard disk and the solid-state drive came out as being very quick.

These fixed-storage devices are augmented with just an SDXC card slot for camera cards and the like. It is symptomatic of a trend regarding newer portable computer equipment where this kind of equipment doesn’t come with an optical drive of any sort. It is thanks to software being delivered using download services like Steam. Still I would recommend the purchase of a USB 3.0 external Blu-Ray burner as an essential accessory for this computer, whether to make an optical-disc backup / archive of your data, deliver some of your data on an optical-disc form to others or view collectable video content on this computer.

The Wi-Fi network works as expected with it being able to pick up properly even at the fringe of an existing Wi-Fi network. At the moment, I haven’t had to install any new drivers to make sure that the network works properly. Like most 15” mainstream laptops, this computer has a Gigabit Ethernet connection that you can use with Ethernet or HomePlug AV2 networks.

You may expect that a gaming laptop may be more thirsty when it comes to battery power but this would happen only when running demanding software thanks to the use of NVIDIA Optimus technology using the appropriate GPU setup for the job. It is  in conjunction with the illuminated keyboard lighting up when you are actually using it while the system is on battery power.

One key limitation with this computer’s battery is that the user can’t replace it themselves. It can be of concern if you intend to keep this computer going for a long time but have to deal with a battery that is at the end of its useful life. Similarly, this situation precludes Dell from offering a higher-capacity battery pack as an aftermarket option for those of us who want that high-performance gaming or video-editing ability away from power.

The Dell Inspiron 15 Gaming laptop can be seen to be too large but the red detailing can be seen by some as giving it that “cute” appeal. I had used it at a Docklands cafe that is opposite a marina and the staff reckoned that it could have some appeal to people who spend a long time on those boats in the marina.

Another man who is in charge of a “Men’s Shed” community support organisation for men has liked the rubberised housing that this computer has when I presented it to him. Here, he remarked that it conveyed a highly-durable feel about the computer.

Dell could improve on the Inspiron 15 Gaming high-performance laptop range by providing at least one Thunderbolt 3 over USB-C connection and optimising it for use with external graphics docks. Here, gamers could choose to use the “card-cage” graphics docks to implement the high-performance desktop graphics cards which are most likely to offer more performance than mobile graphics chipsets. Similarly, those of us using a gaming-grade laptop as an entry to mobile-workstation territory, like engineering students or people dabbling with video editing or animation could use a “card-cage” graphics dock with a workstation-grade graphics card to give the CAD or animation program that expected level of performance.

“Gaming” series computers could be equipped with user-replaceable batteries to allow for a long usage life that reflects their premium prices. It can also allow Dell and others to offer higher-capacity batteries as an option during the model’s lifetime.

I would see the Dell Inspiron 15 Gaming high-performance laptop being suited as a sole or main computing device for consumers and students who place value on a portable computer that is all about performance. This idea of portability may be about a computer you can stow away quickly and easily when not in use, or those of us who live a nomadic life and want something that can be easily transported.

Here, I would recommend the Dell Inspiron 15 Gaming laptops as being fit for gaming but without the aggressive look, or for people starting out a hobby or small-time business effort with photo, video or animation work but don’t necessarily want to go the Apple path. Students who are studying courses that deal with advanced graphics like animation or engineering may consider it as a starting point for this kind of work.

The high-performance variant with the Intel i7 CPU, 16Gb RAM and 128Gb SSD would be the answer for those of us who want to work the computer hard like advanced gamers, video / photo editors, animators and the like. On the other hand, the lower-tier variant with the Intel i5 processor may be good for those of us who want the taste of high performance computing.