I am reviewing the Pioneer NAC-3 (XW-NAC3) Internet music system with 2 iPod docks. This DLNA-enabled network media unit is a flagship model that heads a series of iPod speaker docks that Pioneer has recently released and is the latest attempt by this company to sell “small-set” audio equipment like portable, clock and table radios.

This Japanese company has always been known for high-quality home audio / video equipment since the 1960s and car audio equipment since the 1970s but has dabbled in the highly-competitive product class at various times through the 70s and 80s, initially selling these goods under the “Centrex” brand in some markets but eventually simply selling them under their own brand. This unit is an example of how Pioneer, along with the other Japanese consumer-electronics companies are trying to get their claws back in to a very competitive product class which is awash with many cheap Chinese-built products that are sold under many different brand names.

As an echo to the earlier attempts in the “small-set” audio product class, this unit has functionality that makes it stand out from the pack. One party piece is to work with 2 iPod or iPhone devices and play tracks from one or both of the devices and another one is to properly implement “three-box” DLNA Network Media functionality where it can be managed by a Windows 7 computer or other DLNA control point. 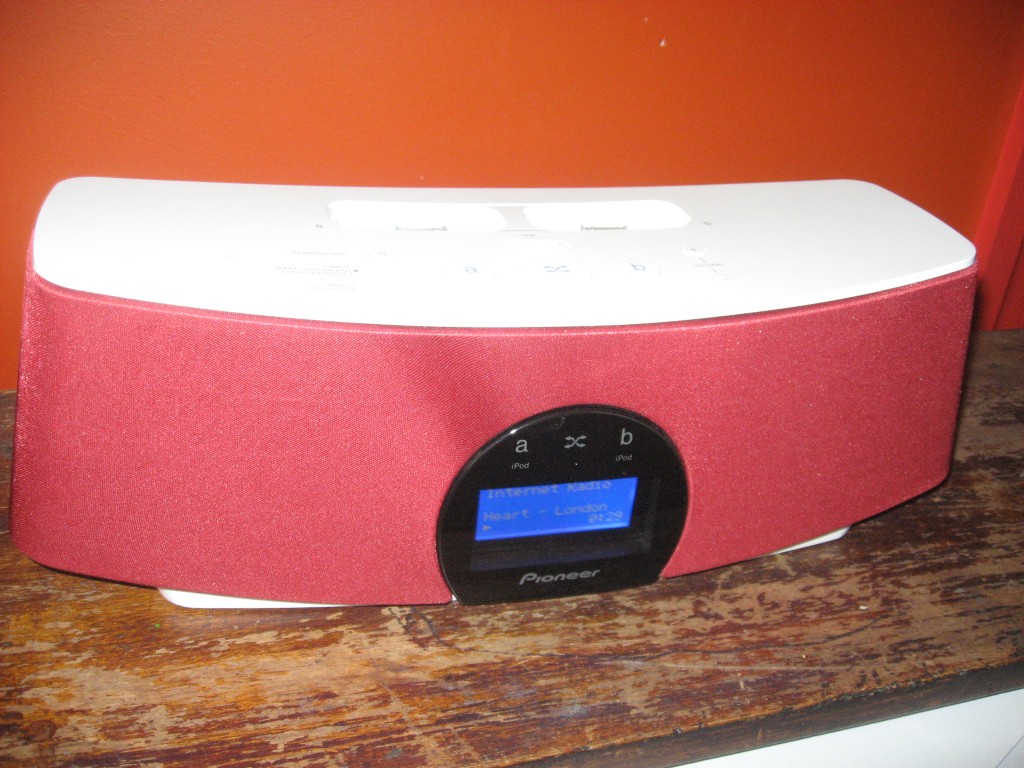 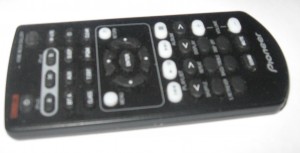 This unit has been designed to appeal to the young generation who just want something new rather than your “father’s old station-wagon”. Here, it has a shape that is similar to a banana and is finished in a glossy-white plastic cabinet. It can come with three different speaker-cloth colours – burgundy-red, black or white. As well, it comes with a card-size infrared remote control which you have to use for operating most functions including access to Internet radio.

This unit can play music from 2 iPod or iPhone devices; a Bluetooth A2DP-compliant audio source, a USB Mass-Storage Device or a line-level source as well as material over the network. But this set lacks some functions that I have been used to with most Internet radio units that I have reviewed previously on this site.

One function that it misses is the ability to connect to the host network via Wi-Fi wireless. Here, you have to connect it to the network using an Ethernet cable, but you could use a HomePlug kit or a Wi-Fi-Ethernet client bridge to connect it to the home network and want “around-the-home” flexibility without needing to lay Ethernet wiring. The other function that it lacks is access to regular broadcast radio, whether FM or DAB+ digital radio. This may not be of concern if you are seeing this unit as an Internet-enabled complementary radio / network music terminal / iPod speaker doc while you use your ordinary radio (which most households have plenty of) for listening to regular local broadcast radio.

You can play and charge two iPods or iPhones here

The ability to play and charge 2 iPod or iPhone devices is useful for quite a few applications. For example, a person who has one of those high-capacity “iPod Classic” series devices can still use this device as a “jukebox” alongside their new iPhone 4 that they have just signed a contract for. This is infact the demonstration setup that I used with an iPod Classic and an iPhone that I had borrowed from a teenage boy that is living with me.  Similarly, a household with many “iDevices” can this as a charging station for two of these devices. The two-iPod function is augmented by a dual-device shuffle mode which plays tracks from each of these devices sequentially. The iDevices can even be put in to “shuffle” mode so as to allow the unit to randomly pick music across the devices.

The system can also work with Bluetooth A2DP audio sources like a lot of mobile phones, tablet computer (including the iPad) or some MP3 players. Here, this worked as a “Bluetooth speaker” for my Nokia N85 mobile phone and had worked as expected. The track navigation and PLAY/PAUSE buttons on the remote control had controlled the music playback on my phone.

The pairing experience was a bit confusing because there was one procedure to set up the paring code but this didn’t make the unit “open for pairing”. You actually had to press the PLAY button on the remote control to achieve this goal and begin the pairing process.

All the media available via the home network connection is accessed when you select “Home Media Gallery” as the function source. This includes the Internet radio as well as music files available from any of the DLNA Home Media servers on your network.

It can handle jitter and latency situations OK but as I have said before, it goes to the “Home Media Gallery” menu once it drops out and loses the connection. This can happen at busy times when the Internet service is oversubscribed and there isn’t proper QoS functionality on the network between the radio station’s server and this set.

This unit integrates properly with the DLNA Home Media Network. Here, it will work as a network music player where you select your content using the NAC-3’s display and remote control; and it will even list the UPnP AV / DLNA Media Servers that exist on your network when you select the “Home Media Gallery” function so you can start “delving” in to the content on your desired server.

It also works properly as a network-controlled music player when you use a UPnP AV / DLNA control point program like Windows Media Player 12 (Windows 7) or a mobile phone with a DLNA media control program. I have even tried this with my Nokia N85 phone which I use as a personal “Walkman” and have “pushed” music held on the phone to this unit via the home network. As well, unlike some DLNA-compliant media players that are meant to work under network control that I have used, this unit will even play a program of music that you direct it to play from the network-based control device.

There are bass and treble controls accessible from the remote control but I had kept the bass and treble set at “flat” so as to hear a sound that I can assess fairly. There is a “sound-effect” button which allows the system to be switched between a “vivid” mode with a bit of extra bass and treble, a “Lo-Fi” mode which yields a cheap transistor-radio sound and an “ALC” mode which keeps the sound level constant for use in noisy environments.

Even if I don’t use the sound-effect modes and I have the bass and treble flat, this Internet radio doesn’t sound like a “gutless wonder”. There is still some punchy bass even with popular music that was recorded before there was the desire to make such music sound boomier and louder. Yet you still hear the vocals and instruments that carry the body of the music clearly and distinctly. Even the heavy bass lines from the recent dance tracks that were on the iPod and iPhone that I borrowed from the teenager to try out the dual-iPod functionality didn’t worry this music system much and they still sounded “tight” – there wasn’t that old bass-heavy “jukebox” sound.

The Pioneer NAC-3 Internet music system could benefit from integrated Wi-Fi wireless-network or HomePlug powerline network connectivity. This is more so because it is the kind of network device that appeals to being taken around the house from room to room.

It could also benefit from a headphone jack because some people use this jack to connect a more-powerful active-speaker system or an amplifier to these devices for increased sound output. As well, the VIDEO output on this unit could be used not just for iPods and iPhones that have a video output. Here, this jack could work with the DLNA network media player to play pictures and video material through a connected TV set.

The Internet radio functionality could have some improvements in the way it operates. It could come back to the “last-tuned” Internet station or attempt to reconnect itself after a dropout. But this may have to be facilitated through a separate “Internet Radio” function on the function selector like what most other Internet radios have.

I would recommend this unit for people who either run two or more iPods or iPhones; a Bluetooth-enabled music-capable phone or have established a DLNA Home Media Network and want a “complementary” transportable device that can get the most out of their digital music library available on their portable devices or home network.