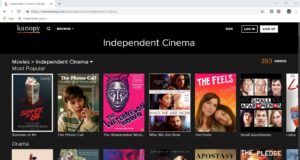 I am keeping an eye out for video-on-demand services that are offering niche content like foreign-language content. This is in response to recent market consolidation in the video-on-demand market and is able to easily survive that kind of activity in the mainstream sector.

A part of the home-video era was the fact that your local library stocked video movies and made them available for loan to its members. In most cases, this was from a government-funded or private film repository that primarily offered educational content along with some locally-produced classic and historic film content. Subsequently, these libraries offered some family-friendly and niche content from the main video distributors whom they had a lending agreement with.

This has fallen away thanks to the rise of video-on-demand services that work via the Internet. But an Australian startup began to partner with various film studios, especially those out of the current mainstream, to offer a video-on-demand service that works in tandem with the local libraries and universities. Examples of this include some classic films as well as a plethora of indie material released over the years, typically material that would have been offered by some of the video distributors during home video’s early years or syndicated by TV stations when they had the ability to choose what they could ran with.

The Gizmodo article called this service out due to the loss of the Filmstruck video-on-demand service which focused on classic cinema, typically material from the Criterion collection. They were lamenting the reduced availability of evergreen video content available to see on cable TV or stream via a video-on-demand service.

You have to be a student or faculty at one of the participant universities or be a member of one of the participating local libraries. As well, in the case of library memberships, you have to make sure your membership is current and correct before you create your account or add them to your account. That includes things like overdue fines and other obligations and you may have to check if that dusty library card has expired or not, including whether it needs to be “brought forward” to their current IT setup. It does support multiple library memberships such as students at a university using a local library card or people living on the border of two different municipalities.

Kanopy works on regular computers with your Web browser but has native clients for the iOS and Android platforms. As far as smart-TV and set-top applications are concerned, they also have native clients for the Android TV, Apple TV (tvOS) and Roku platforms including the Telstra TV repackaged Roku client.  This can be improved upon through the support for Netflix-style “download to view” to allow offline viewing of content during the loan period. Here, it would come in handy with long roadtrips or flights where you don’t have reliable access to the Internet for streaming.

At the moment, Kanopy works on the same principle as the “public lending rights” that libraries pay to authors and publishers for the right to lend out the content. Typically a participating library will pay Kanopy to allow its members to view a certain number of titles per month and this will be paid to the film studios to “lend out” the content.

Kanopy could go further by approaching the public-service broadcasters around the world like the ABC, BBC and SBS to offer their homegrown content catalogues to library members through this platform.  Typically these broadcasters have built up a large amount of content that they have commissioned through the years and most of this content would fit in with Kanopy’s remit. It is already happening with the ABC and some of their shows but can easily go further. Companies and other organisations who create their own educational and training content could offer this to the Kanopy platform for public viewership.

Similarly, Kanopy could approach other organisations to expose their service to their membership. One group would be the primary and secondary schools who would use some of this material as part of their curriculum. Similarly, they could “knock on the door” of more independent studios and quality film distributors to make your local library a viable alternative to what Hollywood puts out. As well, the travel industry could benefit from having access to the Kanopy platform for in-flight or in-room entertainment that is enriching and thought-provoking.

What at least is happening is that Kanopy is bringing the concept of the videos or DVDs made available for loan through the public library systems into the 21st century thanks to online streaming via your home network.