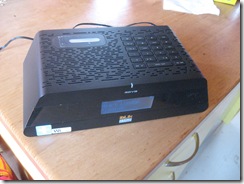 I am reviewing the Revo iBlik RadioStation Internet clock radio which can work as a speaker dock for the iPod. As well Marks & Spencers, the British department store commonly known as “Marks & Sparks”, sell the same radio under their private label but without DAB digital radio as the M&S Internet Radio with iPod Dock.

This radio looks like one of the classic clock radios sold through the 1970s and 1980s but, instead of being a flat box with the faux wood-grain finish, it has a trapezoid look that is finished in dark charcoal grey. The top of the radio has a random-styled speaker grille and a removeable panel where you dock an Apple iPod or iPhone, and the right had side of the top surface has all of the radio’s control buttons. The front of the radio has a darker middle stripe with the LCD display. The set uses a telescopic aerial (antenna) rather than the ordinary “pigtail” aerial wire that is common with clock radios for FM and DAB operation. The only limitation, which is common with most portable radios, is that you can’t replace a broken telescopic aerial yourself. The Wi-Fi aerial is totally integrated in to the set. 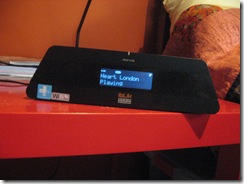 When the unit is turned off, the display is just bright enough to be a nightlight, which makes it suitable for bedroom use. The display becomes significantly bright when the set is in operation, but there could be improvements in the contrast issue. Revo could have improved the display by using a fully-bitmapped display which can allow for a full-height time display which would be more appropriate for this class of radio than a two-line date and time display.

The set has a 3.5nn line input jack (referred to as an mPort jack) for use with portable CD players and the like as well as a pair of RCA line-out connectors on the back for use when connecting to an external sound system or a recording device.This connection is a boon to small businesses who may want to connect the radio to a music-on-hold setup or public-address system if they want to play DAB, Internet radio or music held on a computer over the network through these devices.

This set is set up in a manner similar to other Frontier-based radios like the Kogan reviewed elsewhere in the blog. <Hyperlink to Kogan review> There is still that niggle with the confusing arrow and “return” symbol when you enter your wireless network’s passphrase. As well, you need to make sure your router isn’t using a WEP-WPA compatibility mode because the set may not connect to the wireless network.

The DAB function doesn’t have a “clean-up and scan” option for situations where your set may be moved between locations or if the local DAB multiplexes are re-arranged. This was more of a problem with this review sample which had been taken between Sydney and Melbourne. 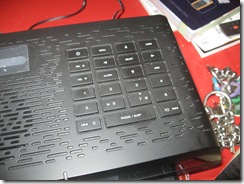 You navigate the menus using four “arrow keys” and a “select” button in the centre of those keys. They are also used to tune the radio amongst the FM, DAB or Internet stations. There is a “mode” button to change between the different sources such as the Internet radio, DLNA music player, DAB radio, FM radio, iPod or aux inputs.

The set can store 10 preset stations in each of the FM, DAB or Internet-radio “bands”, which can be an asset if you dabble in many of the Internet-radio stations. This radio also works as a DLNA media player but can only support control from the set’s control panel or remote control.

Suitability for the bedside table

To set the alarm clock, you press the ALARM key. Here you have room for four different alarm times that can be set to apply once only, every day, Monday-Friday or Saturday-Sunday. This could be useful for setting an earlier wakeup time for the work week and a later time for the weekend where you can afford to have that sleep-in; and you can even have a different wake time for him and her on both the work week and the weekend.

You can set the unit to wake you to the buzzer; a particular station on either FM, DAB or Internet radio; or music held on an attached iPod at a chosen volume. What you set the radio to wake you to can be different for each alarm event, so you can factor in different radio programs that are broadcasting on different times. This definitely offers more than the typical clock radio that most of us use where you have up to two different events and you can wake either to the buzzer or the last-tuned radio station.

When you set the alarm, you have to make sure you save the changes by highlighting the “Save” option and pressing SELECT. This is also true if you want to override the alarm clock by turning it off. The ability to set the alarm clock to come on to a nominated radio program allows you to sleep to music from your iPod, DLNA network media server or a different radio station while you wake to your favourite radio program.

The all-important snooze bar is located at the front edge of the control buttons and is bracketed by two other buttons which are radio presets or “previous-next” buttons when the set works as a media player or with an iPod. This same button can be used to set up the sleep timer. Here, you press this button repeatedly to determine how long the radio can play before switching itself off, then press the “select” button to engage the sleep timer whereupon the radio will turn itself off after the nominated time.

The sound quality is similar to what you would expect for a typical 1980s-issue clock radio. This is because it uses the same speaker size as these units and the speaker is positioned to come out the top of the set in the same manner.

The finish is a “satin-style” plastic finish that is similar to most current-issue clock radios and portable radios. This hasn’t harboured unnecessary fingermarks and the buttons are quick and responsive. It does then have the look and feel of a good-quality clock radio.

For this class of radio, the main point of improvement would be a larger bitmapped display with an EL backlight or a larger bitmapped OEL display which can show the time in large figures which makes it suitable for viewing from a distance. Other than that, the radio suits its best-placing very well, as a clock radio for the bedroom.

There could be an option to have the alarm set for particular days of the week, such as Monday, Saturday or Sunday; as well as Monday-Friday and Saturday-Sunday so you can cater for situations where you may have to factor in particular shifts that occur on particular days.

This is an Internet radio / iPod dock / network music player that I would recommend for use in the bedroom as a highly-flexible alternative to that old clock radio. This is more so if you want to wake up to more than regular FM and AM radio or need something that provides a highly-flexible alarm clock. It can also be used in the office, kitchen, shop or waiting room as a radio or background-music device, and can become a conversation piece in itself because of its shape.

If you are after this radio in Australia, from my experience, I have found it for sale at the electrical department of the David Jones department stores at Westfield Shoppingtown Doncaster. You may also find it available in other premium department stores like Marks & Spencers.

I have had this set on loan for a week courtesy of Bush Australia. As well, Bush Australia have offered the set for sale to me at a reduced price as per their standard practice with media.