I am reviewing the Sony VAIO EJ Series laptop computer which is Sony’s latest effort in providing a consumer desktop-replacement laptop computer.  Typically most of the VAIO range of laptops have been “multimedia” laptops that are pitched for creation or enjoyment of audiovisual content; but the EJ Series are pitched more as “consumer” laptops with the appropriate software. 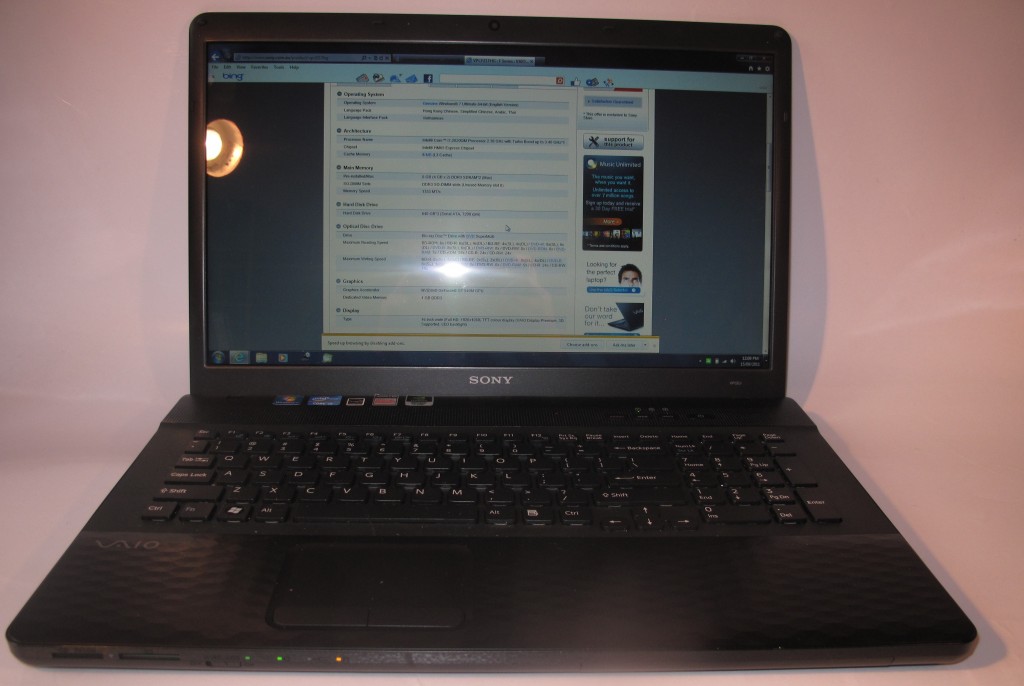 The Sony VAIO EJ Series laptop is finished in the same charcoal-black colour across the unit. It has a hexagon-ripple detail across the lid and palmrest with a perforated area at the top of the keyboard area.

Like the other VAIO laptops, it is very well built and has the typical size and weight for a desktop-replacement laptop.

The keyboard is the typical chiclet style and has the numeric keypad. This is very similar to other Sony VAIO computers like the earlier one that I have reviewed and works well for accurate touch typing. This is due to the keyboard having a rough surface on the keys rather than the slippery surface I have seen with other laptops.

The trackpad is smaller than most laptop trackpads but is easily discernable by feel. This include having access to the primary and secondary buttons.

Sony hasn’t fallen for that trend of requiring you to press Fn to use a standard function like F5. Here, this avoids the need to relearn function key routines that you would have become used to for Windows.

The Sony VAIO EJ15FJ has the typical connectiv+ity and expandability options for a mid-range consumer laptop. These are 4 USB 2.0 ports,separate SDXC and Memory Stick card readers, LAN interface via 802.11g/n Wi-Fi  or Gigabit Ethernet as well as VGA or HDMI for video displays. There is at least a 3.5mm stereo phone jack for use as an audio input jack as well as the 3.5mm stereo audio output jack for connections to headphones or external sound systems.

What I find that is noticeably absent for this laptop is a USB 3.0 socket or eSATA socket which would facilitate high-speed connection to external storage devices.

The audio experience is typical for most laptops where there is use of small speakers. Here, I would rather use headphones or external speakers if you want to get the most out of the laptop for music or movie applications.

The display subsystem is powered by a NVIDIA GeForce 410 discrete graphics chipset with 1Gb of display RAM available. It doesn’t support the dual-graphics setup which allows the computer to work on integrated graphics if you are using it on batteries. This may be OK for a computer that isn’t likely to be used in a portable manner such as a home computer.

The VAIO’s display subsystem works with a large 17” screen that works at a 1600×900 resolution but could be equipped with a similar-sized screen that offers a 1920×1080 Full HD resolution. This screen is a very glossy screen which wouldn’t work well where there is plenty of lighting.

One major let-down I had observed with this laptop is the battery runtime with the system’s standard battery. I had observed that it went through the battery very quickly with 38% left after about 2 hours of word-processing use and it ran a DVD for 1 hour, 58 minutes.

Sony could implement the dual-graphics functionality in this VAIO EJ series laptop if they want to see longer battery runtimes out of these laptops but this computer is being pitched as an “average consumer” laptop.

There is the ability for one to purchase an optional long-run battery for this laptop but it would be needed if you intended to use it away from power a lot.content

The Sony VAIO EJ laptop runs very cool on most tasks. But after a bit of use with video playback, it may start to run hot but this may be due to the graphics chipset.  The system’s ventilation works properly to avoid intense heat build-up that has been known to occur with some laptops that I have used.

One main limitation that I would find for positioning the 17” VAIO EJ series laptops as “desktop replacements” would be the hard disk capacity. Here, I would prefer these units to have a capacity of at least 640Gb like what I have seen with the Dell XPS L702X or the HP Pavillion DV7-6013TX desktop replacements with their 1Tb hard disks if I wanted to sell or specify them as a sole “desktop replacement” computer. I would also look towards implementing either a USB 3.0 port or eSATA / USB 2.0 combo port on the VAIO EJ series laptops so that you can use an external hard disk using high-throughput connections.

As well, I would look towards implementing the full switchable-graphics functionality that is part of the Intel Sandy-Bridge chipsets in order to improve on the battery runtime. I have observed that the integrated graphics on the Sandy Bridge platform can do an adequate desktop-applications, Web-browsing or DVD playback job on batteries. The NVIDIA chipset can work as an “overdrive” for content creation which Sony knows best; or intense gaming sessions and this could be facilitated using the NVIDIA Optimus “automatic overdrive” functionality.

The supplied Media Gallery software could properly play and decode audio files in formats other than MP3, especially if the content is sourced from DLNA-compliant servers. It could really achieve this through the use of Microsoft-supplied logic for media decoding. 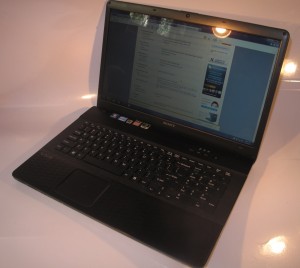 I would recommend this as a “graphics-performance” laptop for home users who want to move towards the new computing environment but place importance on the large 17” screen. Here, the only limitation would be the hard-disk capacity, where I would recommend a Dell XPS L702X or HP Pavillion DV7-6013TX; or use an external hard disk or network-attached storage. It would also have to be used primarily at home or as a transportable rather than “on the road” due to the batttery life issues I have reased in this review.

It wouldn’t suit work-home users who value high-performance links with external hard drives, nor would it suit travellers who need it as an “on the road” computer.