Since the middle of 1979, there came a new way of listening to our favourite music while on the move.

This was brought about by Sony where its founder and CEO wanted a way to listen to music held on cassette tape through a highly-compact stereo cassette player that is connected to a pair of headphones. The production device that came about whose model number was TPS-L2 was based on one of Sony’s best handheld notetaker-grade cassette recorders of the time but played music in stereo through a set of headphones. In some markets it was known as the “Stowaway” or the “Soundabout” but Sony changed the product class’s name to “Walkman”.

This tape player opened up a product class based around a highly-portable stereo cassette player or radio that worked with a pair of lightweight headphones. As more of these devices came on the market, there was a huge rush to improve on their design for portability, sound quality, functionality, and affordability and they became the thing to have during the 1980s. A classic example of this was the Sony Walkman II (WM-2) which was about the size of two cassettes in their cases placed back to back.

Using these devices underscored the idea of a “personal soundtrack” that you enjoyed while you were on the move, whether it was your favourite broadcaster or one of your favourite tapes as you shut out what you didn’t want to hear. Most of these units were so lightweight that you could end up walking, jogging or running for a significant distance without them weighing you down, with this idea encouraging an increase in an interest towards physical exercise. On the other hand, travellers or those of us who had to go to hospital would take a Walkman and a collection of tapes with us to while away the time. 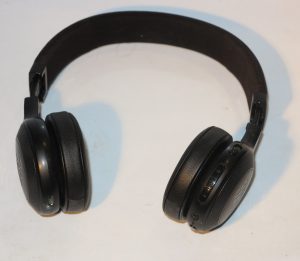 This is while you were able to hear your taped music in a manner where tape or playback faults could show up clearly. It encouraged the record labels to improve the quality of their pre-recorded “musicassette” offering with this manifesting in high-grade tape and higher-quality mass-duplication techniques for the cassettes. Examples of these include EMI’s XDR and CBS SuperSound cassettes.

Schools and parents worried about this device because it was a way for teenagers to shut out what they didn’t want to hear i.e. the lesson material or what the parents wanted them to do, then substitute it with the music that the kid preferred to listen to like the New Wave sounds of the era. As well, it brought about the expression of one being “wired for sound” when they continually used a Walkman device to listen to music, something highlighted in that 1980s Cliff Richard song “Wired For Sound” (Spotify).

With the CD came along the Discman which was a highly-portable CD player intended to he used as a Walkman but for a digital media source. There was also the DCC and MiniDisc Walkman products that used their own media kind. But these led towards file-based audio in the form of MP3 players like the Creative Nomad and Apple iPod family.

The smartphone is today’s equivalent of that Walkman

Eventually the role of the Walkman became part of the smartphone’s function set thanks to the Apple iPhone and some of the Symbian-based Nokia feature phones. You would be able to connect a headset to these phones which would be loaded with file-based audio content whether through tethered syncing with a companion app or through loading a memory card with these files. This is while it could be a navigation device, a communications device, a personal library or handheld games machine amongst many other things.

Along with this, the quality of lightweight easy-to-wear headphones improved over the years with factors like improved bass response. The different types of headphones came about such as active-noise-cancelling headphones and Bluetooth wireless headphones that removed the factor that destroyed many a set of Walkman headphones – broken wires. The headphones ended up being full-on headsets that allowed you to listen to music or make a phone conversation with the same device.

Over the past 40 years, the Walkman underscored the idea of the personal private soundtrack that you can enjoy anywhere using a small battery-operated music-playing device with a set of headphones.