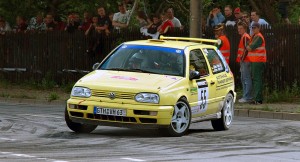 This year’s Pikes Peak International Hill Climb in Coloradio Springs, Colorado, USA has become an interesting race when it comes to enriching the spectator’s experience.

It has been facilitated by the use of Bluetooth Beacons or iBeacons along with an iOS 8+ iPhone app which provides detailed up-to-date information about the competitors and where the place during the race. This includes the ability for users to favourite a competitor and be notified when they hit the finish. The Bluetooth Beacon technology is pitched as being Internet-independent because there isn’t the need to have the vehicles equipped with GPS-capable devices and spectators’ smartphones can pick up these beacon signals easily. 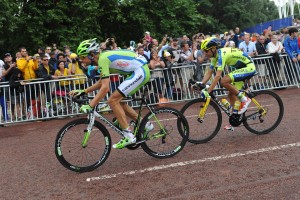 .. like bike races of the Tour De France calibre

But I do see more potential for this in rallies, hill-climb races, road-based cycle races, marathons and similar point-to-point races. This is where competitors are required to race from one point to another and following a known route or series of waypoints. Here, spectators would typically be spread across the (typically long) course and would want to know when their favoured competitors are coming past them as well as knowing how they are placed in the competition.

The same technology can work with other computer systems to accurately determine who has won the race without requiring the use of proprietary transponder technology. As well, there isn’t a requirement for competitors to carry and use GPS devices that need continual mobile-broadband links for uploading real-time position data, something that would be difficult with events held in country areas where such service isn’t all that reliable. The other bonus is that the Bluetooth beacons are very lightweight which adds very little weight to the competitor or competing vehicle where any extra weight carried can slow the competitor down.

But the hillclimb allowed spectators with suitably-equipped mobile devices that supported beacon detection to detect these beacons themselves when it comes to when “their” competitors are near. As well, computing devices with Bluetooth Smart functionality and Wi-Fi / mobile-broadband Internet access can be located at key points in the course to report the competitors’ positions for real-time updates for broadcast and online use.

It does show that the idea of using the Bluetooth Beacon technology for tracking the competition in point-to-point races has been proven thus allowing for systems that are more affordable for providing real-time competition updates for the spectators. It could be that as you watch that car rally you could have you phone notify you when that rally legend is near and about to perform that 3-point turn in the WRX. Similarly, your phone would notify you as the Tour De France péléton is about to arrive in your street so you can flip open those shutters and windows on the front of your house to have a look as it comes past.

For it to work effectively, the Bluetooth Beacon technology needs to be able to work on the client side with iOS, Android and Windows platforms with the necessary client apps written to work on each of those platforms.

Most of us who watch sports have a preference for a personalised audio experience during these events. For example, a common method of enjoying cricket in Australia is to have the TV’s volume turned down and the ABC radio commentary playing on the radio or hi-fi. This is due to “cutting out” the TV advertising as well as listening to cricket commentators who know what they are talking about.

Similarly, I have watched the Tour De France on SBS and do enjoy the English-language commentary that is provided but have had a taste of the French commentary when there was a technical mishap and would appreciate that, due to my knowledge of the language. Sometimes, a simple “music-and-effects” soundtrack for a royal wedding or similar public ceremony may suffice as the audio experience rather than what some might see as a “slanted” commentary.

Dolby is putting forward the idea of a highly-personalised soundtrack for sporting, cultural and other live events that can include one or more different commentary streams along with, for example, effects or other “event-driven” sounds that follow something like a social-media stream. This can be derived from “existing infrastructure” like broadcast commentary, or IP (the Internet) which could be something like an alternative radio or TV commentary or a “text-to-speech” of Twitter comments from your friends.

Of course, they say that it could require additional hardware at the broadcaster’s and consumer’s side for this to work but a lot of smart-TV and set-top-box platforms that have an Internet connection of some sort could adapt to this easily through a firmware update or the delivery of an app.

This application for interactive TV could be a godsend to those of us who love our sporting and cultural events our way.

Whatever side of the world you are on, you will be wanting to keep tabs on the Olympic Games in London. For example, you may want to know whether your country is clawing the Gold medals or a favoured athlete is performing well in the sport you are watching. It can even extend to knowing when a new world record has been set or broken.

But the problem is that you may be watching it during that Olympics party that you are attending or hosting at home and everyone runs in to the living room for that key race where that record is being set or broken. Or you are watching an Olympics event in that crowded bar and you want to make sure you can get that drink without missing that record-breaker or gold-medal performance. A good thing to do is to equip your smartphone with an Olympics sports-scoreboard app. Like most apps of this kind, these are offered for free by a sports publisher or broadcaster or one of the official sponsors of the sport.

These apps will benefit people who are on the other side of the world where the activities occur overnight and they may not be able to follow them in real time. Here, the sports scoreboard apps can be useful for checking on the scores for the events that just occurred as part of starting your day’s activities so you can decide whether to watch the replays or not.

Your local official broadcaster, like the NBC in America, may run a scoreboard app for the major mobile platforms. There is also a good scoreboard that is offered by Samsung for both the iOS and Android platforms. This one offers the scoreboard for each of the fixtures as well as a medal tally and the ability to track an event or athlete. The limitation with this is that you cannot track a country team, whether for team-driven or individual-driven sports. ScoreMobile currently offers an “event alert” for medals and breaking news, but nothing more.

It is still worth considering these apps as part of “tooling up” your smartphone or tablet computer for the Olympics so you can have the best value out of these games when you use these devices.

After hearing the latest furore about Optus delivering delayed broadcasts of the AFL and NRL football matches to their mobile subscribers, I have thought that something needs to be done concerning how online and mobile rights for sporting and cultural events are worked out.

Typically the online and mobile rights for these events are bought by ISPs or mobile carriers for exclusive distribution to their subscribers. This has become a thorn in the side of sports and cultural bodies, existing radio / TV broadcasters and similar groups due to various limitations that could exist.

For example, most radio stations run an Internet-hosted simulcast of their regular broadcast and this has extended radio to the iPhone and popularised the Internet radios such as the ones I have reviewed on this site. What has happened lately is that radio stations that call AFL or NRL football matches using their own talent have had to run alternate programming on their Internet feeds so as to placate Telstra who have exclusive rights to these matches.

Similarly, Optus running a broadcast-IP setup and cloud-recording arrangement to deliver the football to their subscribers has ruffled Telstra’s and the football leagues’ feathers.

This can cause issues not just with ISPs and mobile providers but can affect companies who deliver any form of IPTV services which is a growing trend with the arrival of next-generation broadband services. It could even extend to usage environments such as hotels and apartment blocks implementing “broadcast-IP” tuners to deliver broadcast content from a rooftop aerial to the building’s LAN with Internet-enabled radio / TV equipment connected to the network showing or playing the content.

What needs to be looked at for defining online rights to a sporting or cultural event is whether the online use is simply a verbatim use of an existing radio or television broadcast or data available on the scoreboard; or whether it is an extended mixed-media interactive use of the content. The “verbatim use” would be something like diffusing broadcasts from a broadccast-IP tuner to a broadcaster simulcasting an audio or video feed of the broadcast to the Internet and providing a user-interface just to gain access to that stream. It can also encompass someone who writes a mobile scoreboard app with their own interface.

This is compared to an enhanced online service with extra data on the game being provided alongside the broadcast of that game, such as on-demand video, a Web scoreboard or a highly-strung scoreboard app with the leagues’ logos.

Here online / mobile rights could be split in to two categories – a default simulcast rights for existing broadcasters which requires verbatim use of the sportscast including all commercial and continuity material normally broadcast; and an enhanced online right for online providers who buy that right. The latter right should then enable access to the content by users associated with competing Internet and mobile providers under the same terms as the rights-holder’s subscribers. There could also be a raw-data right for people who prepare their own data applications like sports-magazine Websites and online scoreboard apps.

For the league or cultural-event organiser, they could be in a position to sell multiple online rights classes or choose to offer “verbatim-use” (simulcast) rights to existing rights-holders as a way of bolstering broadcast-rights packages/ As well, private-network use of broadcast material, including time-shifted copies, should be qualified as a standard fair-use right for users of that network such as a household or a hotel’s employees and guests.

What needs to happen is a common sense of “working out” broadcast rights for live sporting and cultural events so that uses commensurate with broadcasting are protected yet the organiser can sell advanced-interactive use rights to online and mobile providers.