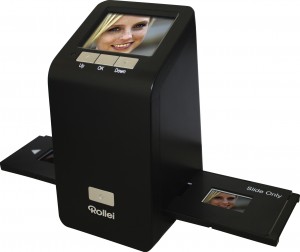 Those of us who lived through the 1950s to the 1970s often dealt with 35mm photo slides being par for the course for family photography. This was most often through people keeping large collections of these slides or sitting through many evenings where it was time to drag out the slide projector and show these slides on a screen. It was infact the kind of activity that tended to take place once someone came back from a long trip overseas.

These people valued the slides as a photographic medium because they were compact and you could either show them to many using that projector or view them personally using a handheld viewer.

There have been some unsatisfactory attempts to get these slides along with 35mm negatives on to a computer form. This typically involved a very expensive process of sending the pictures out to a digitizing service who would scan them to a CD or you were dealing with a scanning device that would turn out low-resolution images of these pictures and allow you to handle up to five of them at a time.

Rollei have raised the game with this class of device by selling a range of standalone slide / film scanners that had a 10-slide “continuous-feed” tray as standard. Here you could place 10 slides in this tray and work a lever to feed each slide through the machine once you scan them using the machine’s control surface.

Here, you could scan the slides stored in one of those classic yellow Kodachrome slide trays with very little fuss and is an improvement on similar scanner devices and multifunction printers that have transparency-scanning abilities because you don’t have to place slides in to a carrier like ducks in a row. It can also be of benefit to those of us who have limited dexterity, something that will come about as we get older.

Where do the images end up? They end up on an SD card that you provide and you transfer this card to your laptop to download the images. There is the ability to correct exposure or colour balance using the Rolei slide scanners’ controls, along with the ability to correct slides or negatives that were put in the scanner the wrong way. Some of you may find these options superfluous if you use software on your computer like iPhoto or Windows Live Photo Gallery to adjust the picture quality as part of using your computer to add metadata to your image scans. But this can come in handy if the goal is to have those memories appear on an electronic picture frame or similar device, or simply to “dump” them to a DLNA-capable NAS to be available on your home network or a Dropbox folder that you share with your family .

As well, the Rollei DF-S 290 also has an HDMI connection so you can use your large-screen TV or computer monitor as a preview screen or as a playback screen for showing those slides.

Of course, there is still a gap in the marketplace for certain “off-the-film” image-scanning jobs.

One of these is handling large slide collections that are stored in slide-projector magazines like the Kodak Carousel. This is because most of the scanners that support these magazine systems tend to fetch premium prices and are typically designed to work as peripherals for computer systems.

Another gap is being able to reliably scan film that isn’t held in a carrier that is supplied with a film scanner. This is of annoyance for people who deal with long flimstrips such as slide film that is “strip-processed” or negatives that you developed in the darkroom but didn’t cut in to the standard strips.

Yet another gap is being able to handle film formats other than the common 35mm film. In the consumer space, these surface as the 110 or 126 “Instamatic” cartridge films whereas in the hobbyist and professional space, these surface as the 120 or 220 “medium-format” roll films. It also is true for people who use equipment that uses variants of the 35mm film format like half-frame or panorama cameras.

Here, a scanner design could answer these needs through the use of optical zoom or digital zoom with a high-resolution imaging device. As well, for “on-device” editing, there could be the ability to crop to various aspect ratios supported by these films or stitch together panorama images taken by multi-frame panorama cameras.

At least someone is taking a proactive step towards providing affordable equipment for scanning those large slide collections and making them available to view on our home networks.