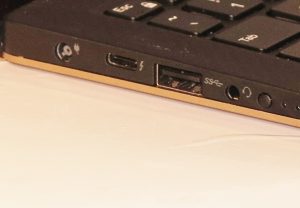 With USB 4, Thunderbolt and USB will converge | TechCrunch

Intel and the ISB Implementer’s Forum have worked together towards the USB 4.0 specification. This will be primarily about an increased bandwidth version of USB that will also bake in Thunderbolt 3 technology for further-increased throughput.

USB 4.0 will offer twice the bandwidth of USB 3.1 thanks to more “data lanes”. This will lead to 40Gb throughput along the line. It will use the USB Type-C connector and will take a very similar approach to the USB 3.0 standard which relied on the older USB connection types like USB-A, where a “best-case” situation takes place regarding bandwidth but allowing for backward compatibility. There will also be the requirement to use higher-performance cables rated for this standard when connecting your host system to a peripheral device using this standard.

Intel is opening up Thunderbolt 3 with a royalty-free non-exclusive licensing regime. It is in addition to baking the Thunderbolt 3 circuitry in to their standard system-on-chip designs rather than requiring a particular “Alpine Ridge” interface chip to be used by both the host and peripheral. This will open up Thunderbolt 3 towards interface chipset designers and the like including the possibility of computing applications based on AMD or ARM-microarchitecture silicon to benefit from this technology.

This effort can make Thunderbolt-3-equipped computers and peripherals more affordable and can open this standard towards newer use cases. For example, handheld games consoles, mobile-platform tablets or ultraportable “Always Connected” laptops could benefit from features like external graphics moduies. It may also benefit people who build their own computer systems such as “gaming rigs” by allowing Thunderbolt 3 to appear in affordable high-performance motherboards and expansion cards, including “pure-retrofit” cards that aren’t dependent on any other particular circuitry on the motherboard.

Initially I would see USB 4.0 appear in “system-expansion” applications like docks or external-graphics modules, perhaps also in “direct-attached-storage” applications which are USB-connected high-performance hard-disk subsystems. Of course it will lead towards the possibility of a laptop, all-in-one or low-profile computer being connected to an “extended-functionality” module with dedicated high-performance graphics, space for hard disks or solid-state storage, perhaps an optical drive amongst other things.

Another use case that would be highlighted is virtual reality and augmented reality where you are dealing with headsets that have many sensors and integrated display and audio technology. They would typically be hooked up to computer devices including devices the size of the early-generation Walkman cassette players that you wear on you or even the size of a smartphone. It is more so with the rise of ultra-small “next-unit-of-computing” devices which pack typically desktop computer power in a highly-compact housing.

Of course, this technology will roll out initially as a product differentiator for newer premium equipment that will be preferred by those wanting “cutting-edge” technology. Then it will appear to a wider usage base as more chipsets with this technology appear and are turned out in quantity.

Expect the USB 4.0 standard to be seen as evolutionary as more data moves quickly along these lines.

After a few versions, operating systems on computing equipment will need to be reworked

A common practice that takes place when an operating system is being written for a computing platform is that extra code is bolted on to the existing code to give it more functionality or cater to newer hardware. This happens due to newer peripheral types or connection methods being available to the computing platform or these devices being improved; along with security and stability questions that are raised through the software’s lifespan being answered.

But after a succession of releases, the operating system’s software-footprint becomes increasingly larger and ends up being slower to run. In the case of battery-operated equipment like smartphones, tablets and laptops, this same situation places a strain on the amount of time you can run this device on its own batteries.

This is more true when the operating system is partnered with older hardware that can be slower or not have enough storage capacity. It then comes to a tipping point in the operating system’s life that the software has to be rewritten from the ground up for improved performance and to have the newer abilities factored in to the software’s codebase.

This had happened with Windows when the security enhancements that were added on to Windows Vista made that version of the operating system become too slow and unwieldy. Microsoft subsequently rewrote the Windows codebase to provide for a highly-stable highly-secure operating system in the form of Windows 7.

It also happened with Android where version 4.3 Jelly Bean and 4.4 Kitkat became unwieldy with certain functions like handling Bluetooth or security-related functions. Android 5 Lollipop had a lot of this functionality written in to its codebase rather than being tacked on thus making for an operating system that was more stable.

Now it is happening with Apple’s operating systems – the iOS mobile operating system and MacOS X operating system. Both these operating systems will be undergoing a rewrite with minimum emphasis on new functionality but more to iron out the bugs. The Age article highlighted the fact that iOS 9 will work more “tightly” on older iPhones like the iPhone 4 Series, giving some sort of freshness to these devices.

A reality that can happen after one of these major overhauls is that as the computer scene changes and the operating system undergoes further revisions to accommodate the new changes, it could end up being bloated again. Again, this is the time that one of these major rewrites would have to take place in order to keep devices of that platform running smoothly.

A recent US District Court (New Jersey) ruling was handed down requiring Avaya to expose maintenance commands for their business phone systems after the jury who heard an antitrust case concerning this company found that they unlawfully prevented maintenance access to these systems for their owners or independent third-party service contractors.

This case was about who can perform repair or maintenance work on IT systems especially where they are becoming more software-defined. The article even mentioned that this is heading out beyond the IT scene towards the maintenance of cars, “white-goods” and similar products especially as more of them have their functionality driven by software.

For example, I know of two friends who have had technicians look at their 30-plus-year-old ovens and the technicians have preferred to keep them going rather than replace them with newer ovens. This is because of issues like continual availability of parts for these stoves and the way that they can be repaired.

Here, it was about who can continue to perform service on the equipment concerned and the availability of the equipment’s owner to gain access to independent experts to keep it going. I see this also opening up doors for third-parties to continue to offer innovative software or other solutions that enhance the equipment or shape it to a user’s needs. This will extend to encouraging the implementation of “open-frame” designs for hardware and software which will push forward a culture of a level playing field and, in some cases, a longer service life for equipment.