I am reviewing the Toshiba Portege R830 series of ultraportable notebook computers which is targeted at business users, primarily the “big end of town” but there are models in this series that can appeal to most users who are after a notebook that can be stuffed in to that bike bag or shoulder bag.

This is the first ultraportable notebook based on Intel Sandy Bridge technology that I have reviewed for HomeNetworking01.info.This class of notebook is infact a proving ground for the technology because it has requirements for long battery life, ability to play video content at a moment’s notice as well as be light and suitable for use on the road. The Toshiba Portege R830 Series is so well positioned with this respect due to it being equipped with an optical drive which would come in handy with playing DVDs that you buy or rent before that long bus or train trip. 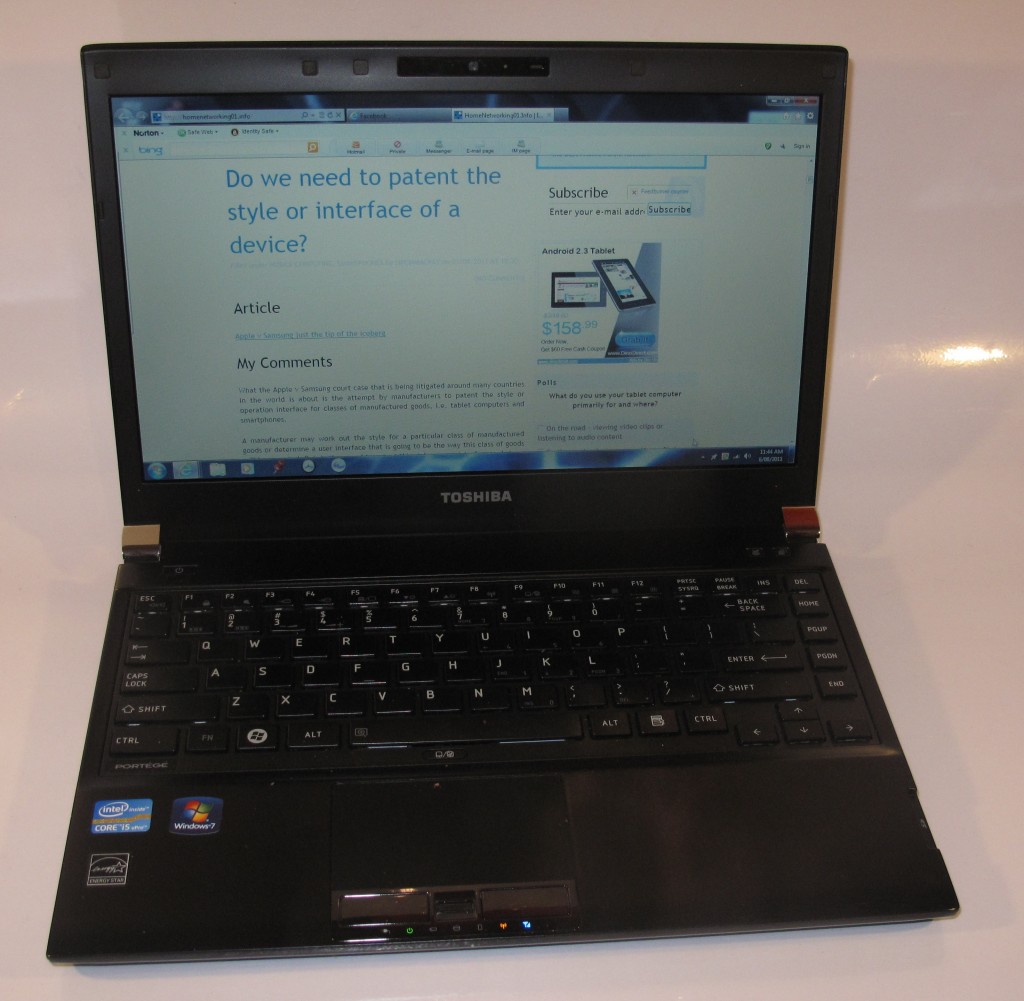 I have noticed negligible extra weight when I have packed in my day bag to take it on an “on-road” test drive. It is large enough for the lid to lean back while in crowded buses or economy-class airline seats, even if the seat ahead is suddenly reclined.

The Portege R830 Series is finished in an all-black finish with chrome highlights on the lid hinges. This avoids the tendency to use a fingermark-attracting gloss finish, which allows for a more durable finish.

As well, for an ultralight computer, it is very well-built and has a good-quality finish about it. It was also able to handle the rough usage that may occur as it is taken out and about when you travel or go “hotspot surfing”.

The Toshiba ultraportable notebook is equipped with a chiclet keyboard which supports accurate touch-typing for long perionds, even while travelling on public transport. It could benefit from rubber-capped keys so you know where you are actually typing.

The Intel HD video is responsive for most multimedia tasks especially video playback. It may be able to cope with basic editing but there may be problems when you use the video-editing tools to make anything beyond “rushes-quality” video. I even noticed that the Toshiba had performed very well even when it was playing “Munich: from the integrated DVD burner whil;e running on batteries.

Unlike most laptops, the Toshiba Portege R830’s screen on this unit isn’t a reflective glossy screen, which makes it suitable for bright operating environments.

The sound-reproduction for these laptops is typical for many of the laptops in that it has the tinny speakers that don’t provide depth to the sound. I would recommend that you use this laptop with a pair of good headphones or a good speaker setup when you want the best out of the sound.

I have run this computer on a variety of activities and it has run longer than expected for the typical laptop. For example, I was able to have a DVD playing for four hours after a full charge and fhen find that there is 25% of power left, with an estimated 4 hours worth of use left. 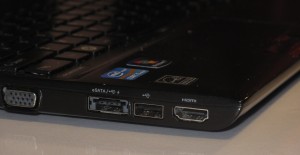 The Toshiba Portege R830 has a Sleep And Charge feature for one of the USB ports. Here, it means that the notebook can be set to supply power to 1 USB port while it is off so that smartphones and other gadgets can be charged off that port. This may benefit travellers who want to cut the number of chargers and AC adaptors they carry for their devices while on the road. For overseas travellers, this may avoid the need to carry extra plug converters for mobile phone chargers while they travel. The function has worked as stated on the tin when it came to charging my Samsung Galaxy S Android smartphone as illustrated below. 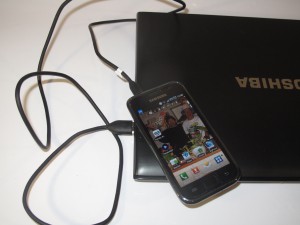 I had shown this computer to some friends whom I live with when I was talking about laptops and they thought it was similar to a netbook that they considered as a “traveller” computer. This is although they were used to seeing the larger laptop computers and didn’t really pick up on this class of ultraportable notebooks that filled the gulf between the netbook and the regular laptop.

The Toshiba Portege computers do work well as a current-spec traveller’s computer where you value creating content or need the ability to work with DVDs. It does the Sandy Bridge CPU/GPU platform justice as far as “traveller-friendly” portable computing goes.

I would recommend this configuration for use as a secondary traveller computer where only current data is kept on the system and quick performance is a priority. If you do need to have a larger data collection like digital photos or videos that are being “proofed”, you may have to use an external hard disk or invest in the more-expensive model of the series. 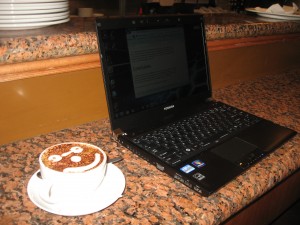 There is a variant of this model that is equipped with the same processor, RAM and other specifications but has a regular 500Gb hard disk for AUD$1980 which may suit most people who want the same power but more storage.

But whatever, I would place the Toshiba Portege R830 series of ultraportables as contenders for a notebook computer that you intend to use “on the go” especially if you cycle or use public transport. It also would be an appropriate notebook to use if you do a lot of work at Wi-Fi-equipped cafes.

You are thinking of a portable computer device that can stand between your smartphone and your regular 15”-17” laptop computer. But where do you go?

Firstly, we have seen the tablets like the Apple iPad family and the newer crop of Android-powered tablet computers. These units have a touch-driven user interface and range between 7” for a unit that can be stuffed in to a large pocket on your coat) to a 10” unit that can sit on a coffee table. They are good for viewing previously-written material or performing limited data-entry tasks like responding to email in a brief manner, due to the nature of the touchscreen keyboard.

There has been talk of these tablet computers displacing netbooks in their computing roles but the netbooks can still work for some users when it comes to taking notes or responding to letters and they want a keyboard that they can feel properly.

On the other hand, you have ultraportable or subnotebook computers which typically range up to 14” and are optimised for portable use. These units will have a regular keyboard as well as the separate larger screen. Also, they run a regular desktop operating system in the Windows or MacOS X families, which allows them to run regular fully-functional software like Microsoft Office or work with a large range of computer hardware.

There have been some new examples of very capable 13” ultraportables that have been cited in this article. One was the Lenovo ThinkPad X1, which is Lenovo’s attempt to respond to Apple’s cool designs. This is even though it is built by a company preferred by corporate “fleet-computer” buyers due to inherent ruggedness and security features. Another is the Toshiba Portege R830 which is a lightweight Core i5-powered model with an integrated DVD drive and USB 3.0. Yet another emerges from Hewlett-Packard as the HP ProBook 5300m, a Core i5-powered subnotebook that has had its audio subsystem worked with Beats Audio technology.

The author who wrote the article for the Technology Spectator that I am commenting on even had prepared the manuscript for the article on the Lenovo X1 and had found that the proper-size keyboard had allowed him to do the job. This is in a similar experience to what I had when I reviewed the Dell Inspiron 13z last year for this site and found that this class of computer is a proper size for those of us who want a travel-friendly computer to type up work on. It is because these computers use a keyboard layout and area that is commensurate to a standard typewriter keyboard, thus allowing you to properly touch-type without your hands feeling cramped; and you also have the proper tactile feedback that you have when you operate these computers’ keyboards.

This form-factor has become very useful especially amongst those of us who do a lot of public-transport travel, especially air travel because the can easily fit on those economy-class airline tray tables; as I have seen for myself on my flight back from Sydney. Here I have seen a person who was sitting next to me have one of these machines on their airline tray-table just for viewing some video material; and they didn’t look cramped when they used that computer.

As well, they are highly valued for wireless-hotspot use because they could fit on a typical cafe table or a window / wall bench that is very common at these places. This is more so as a lot of us use the cafe as a “second office” where one can get on with their work without office-driven distraction.

The possibllity of convertible “bridge” computers

Manufacturers could consider placing in to their market “convertible” ultraportable computers that have a touchscreen so one can benefit from the bonuses of touchscreen computing as well as have something with a proper keyboard. This could be augmented with Windows 7 fully utilising its touch and tablet abilities and support for applications that have proper touch-operation benefits. Of course, there has to be improvements with battery runtime and the ability to work with multi-touch gestures.

As for “big-time” media who want to preserve their “tablet-editions” of their newspapers; they could also run desktop front-ends for the Windows platform to provide the newspaper experience to these touchscreen-enabled portable computers.

I would reckon that a secondary portable computer that you use should be dependent on what you intend to do with it. If you do intend to just use the device for reading and viewing material; and occasionally creating emails, I would go for a tablet computer. On the other hand, if you are doing a lot of correspondence or creating a lot of material like writing articles while out and about, a subnotebook / ultraportable could suit your needs better.