A question that can be raised in the online era is whether radio and TV broadcasters need to place their latest newscasts “on demand” alongside running them at the appointed times.

This is to encourage us to find relevance for traditional broadcast media in an age where the preferred source for information and entertainment is from online media services including social media. It is also about finding ways where traditional public-service and commercial broadcast media can maintain their influence in an age where Silicon Valley is obtaining more clout.

The typical newscast situation as it stands

What typically happens with radio is that most stations will ordinarily run a short-form newscast of up to five minutes long on the hour. Some of them even run an additional newscast on the half-hour during the breakfast programme as people are getting ready for work. It doesn’t matter whether the radio station serves as an informer like the talk-based stations or as an entertainer like music-based stations. Some stations who don’t have their own news-gathering team usually syndicate another station’s short-form newscasts to keep their listeners up to date with the news.

For TV, the traditional broadcasters, especially free-to-air broadcasters, frequently run regular short-form news updates, commonly known as “newsbreaks”, inserted between programmes or during commercial breaks. They are typically used to announce breaking news or updated news items or provide a succinct overview of what’s going on. This is in addition to the main long-form half-hour news bulletins run during breakfast, midday, early afternoon, early evening (which is TV’s prime time) and late evening.

Some of these stations may run dedicated newsbreaks focused on particular themes like local weather or financial / business news. The TV stations who advertise on local radio during the afternoon drive-time programme are more likely to run an audio equivalent of a newsbreak as their commercial for that daypart in order to create public interest for their main evening news bulletin.

Let’s not forget that all these broadcasters will run newsflashes, even interrupting regular programming, when there is significant breaking news.

The current way we consume media

But we are living in an environment where we rely on on-demand entertainment like Spotify, podcasts, Netflix and catch-up TV services. We even end up in an environment where sports is the only reason for watching or listening to linear real-time broadcast content. Similarly, some of us use PVRs to record TV shows and may find ourselves with “banked up” TV-show collections on these devices especially if we travel or not watch any TV for a while.

But most radio and TV stations’ Websites provide news clips for each of the news items that occur through the day, more as a way to allow people to learn more about particular events or share them on blogs or the Social Web. This is based on the “portal” idea that was started when the Web cam in to the mainstream and these broadcasters wanted to augment their daily broadcasts with a Web-based newspaper.

How can radio and TV news fit in with today’s media habits?

Amazon Echo, Google Home or similar platforms could be used to summon the latest news

But having the latest radio and TV news available in an on-demand context can earn its keep with a significant number of use cases.

For example, a short-form newscast like a radio news bulletin or TV “newsbreak” could earn its keep with a voice-driven home assistant where you could ask for the latest news. In this case, you could say “Hi Alexa, what is the latest news from the ABC?” and you would hear the latest local ABC Radio newscast together with the ABC’s newscast signature tune we have loved. If you are dealing with a voice-driven home-assistant device equipped with a screen like Amazon Echo Home, you could ask the voice assistant for the latest news from a TV station like the Seven Network whereupon you would see the latest newsbreak. In those situations where you have separate short-form newscasts for finance, sport, weather and other topics, it could be feasible to ask the voice assistant for one of these newscasts.

Similarly, a podcast or music player app could support the insertion of short-form news bulletins between podcasts or between tracks after a certain time has passed. A TV network having the latest newsbreaks online through their catch-up TV services or through YouTube can allow users to “pull up” short-form news content as required.

There could be the ability to draw down that long-form prime-time TV news bulletin via a “catch-up” TV service so one can catch up with the day’s news at a time they see fit. Even offering an audio-only version of one of these bulletins could earn its keep with a range of users like vision-impaired people or drivers.

What can broadcasters do?

Most broadcasters and networks don’t have to do anything with the news content that they make available through their channels. They simply have to keep the recordings of short-form and long-form news bulletins available and indexed according to time of publication.

Radio stations can even record the bulletins that are not normally recorded like traffic bulletins to provide an experience similar to what Blaupunkt achieved with their Traffic Information Memo feature on some of their 1990s-era car radios. This was where the car radio would operate in a standby mode for three hours when the car is parked and record traffic bulletins as they come through from the last-tuned radio source. It relied upon established standards commonplace in Europe for providing machine-to-machine signalling for these broadcasts, namely the RDS system. Then the driver would be able to press a blue “TIM” button to hear the last four traffic bulletins that were recorded.

This can be facilitated in a manner similar to what happens with podcasts where the latest content is available through an RSS Webfeed. Most talk stations would be familiar with this practice when they make their shows available as podcasts or for syndication to other stations. But they also need to keep their “branding” alive with these newscasts like maintaining the use of their news signature tunes at the start of each bulletin so people know they are dealing with their favourite broadcasters. Let’s not forget that a single URL should then be used to provide a Weblink to the latest news bulletin for the various voice-driven-home-assistant skills, mobile apps and the like to locate that resource.

The idea could be augmented by having a standard metadata flag for RSS Webfeeds containing audio or video content like podcasts that represents the fact that the feeds are news bulletins. Here, it could allow “podcatcher” and similar software to treat them as a news bulletin then retain and play just the latest newscast. As well, if the software has always-live Internet access, it could make sure it’s always up to date with the latest news bulletins that the user wants.

As well, broadcasters and allied organisations can create “skills” for voice-driven home assistants along with “channels” for on-demand video services. It can extend to linking them to standard application-programming interfaces to facilitate “news-on-demand” apps and services.

There has been some investigation by online media providers, especially those who have advertising in their business model to permit free or freemium access like Spotify or YouTube to allow the insertion of newscasts in online-advertising spaces. Similarly, providing it as an optional service or “channel” on a streaming service is being seen as a way to add value to these services.

But this kind of application especially where newscasts are inserted in to a playlist could be seen as heretical by the Millennial generation who want to break away from traditional broadcast media and the methods they use. This is although having the latest radio and TV newscasts on demand through various mechanisms is really about mass customisation.

What will be required of traditional radio and TV broadcasters who maintain a strong profile with their newscasts is to “think outside the box” with how they are used. This means being able to take them further and integrate them with Amazon Alexa, Google Assistant & co; or effectively have them as part of “custom-content” strategies. 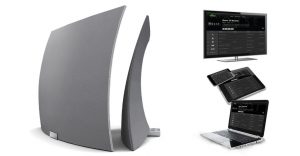 The Winter CES 2017 in Las Vegas has shown up one of the first “broadcast-to-LAN” indoor TV antennas for the North American ATSC-based over-the-air TV landscape.

Mohu are pitching this device at the current generation of “cord-cutters”, who are an increasing number of American households that are dumping traditional cable or satellite TV services for classic over-the-air TV and Internet-provided “over-the-top” video services.

But unlike Europe, Australia, New Zealand and other countries where a healthy traditional free-to-air TV service is regularly received and just about every building maintains an outdoor TV aerial (antenna) or “master antenna TV system” for larger buildings, most of urban USA have headed towards a “cable-only” approach since the 1980s with buildings not having these TV aerials. What is now happening is that most American households who want to dump cable TV are connecting their TVs to indoor TV aerials to receive the local TV channels.

Mohu are offering a range of improved “flat-plane” indoor TV antennas that are able to provide better reception than the traditional “rabbit’s ears” or spiral-shaped indoor TV antenna that typically was used to do this job. Here, they have built this design from a radio-antenna design for military vehicles that they worked on where the antenna for the vehicle’s radio equipment is part of its mudflaps.

The AirWave device is infact a broadcast-LAN server which can stream over-the-air TV in to one’s existing Wi-Fi network so it can be viewed on a laptop, tablet or smartphone thanks to a Mohu-designed app. The native app for the supported mobile and TV platforms or the Website provides an aggregated view of the content offered by the local free-to-air stations and the over-the-top TV services.

There still are some questions to be raised about the Mohu AirWave as a broadcast-LAN device. One of this is whether it uses more than one front-end tuner. If it does, it could be feasible to watch or record multiple broadcasts concurrently. Another question that would be raised is whether the Mohu AirWave can expose the local TV channels in an open-frame manner like SAT-IP or DLNA. This can allow other companies to develop their own software or exploit existing software to view or record TV content rather than relying on Mohu’s front-end app or Webpage.  Similarly, it may be worth wondering whether this device uses an Ethernet connection to allow for reliable network connectivity when you use it with an Ethernet or HomePlug powerline network segment.

It may be feasible to think of this broadcast-LAN antenna device as being just fit for “cord-cutting” but it can do more than that. Even if this device isn’t its own Wi-Fi access point, you can have it work with a Mi-Fi router to become part of a mobile Wi-Fi network. For example, using it with a tablet or laptop computer could make it serve as a temporary TV-viewing setup for doing something like keeping tabs on that sports fixture or news event at the office or job site during the lunch break.

Mohu could also court the European/Australian/New-Zealand market with the AirWave broadcast-LAN TV antenna by offering a DVB-T/DVB-T2 variant that can receive the free-to-air broadcast stations offered in these territories using this standard.

What is being shown here is that the concept of a broadcast-LAN tuner setup which exposes TV broadcasts to a home or other small network is being extended to traditional broadcast TV through a device that is more than just “rabbit’s ears”.