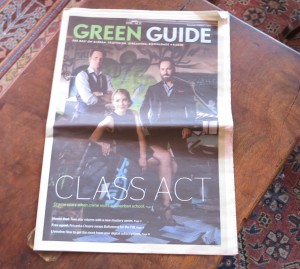 What will become of the TV guide that lives on the coffee table?

The above-mentioned article highlights how the traditional printed TV guide is faring in the Internet, blogging and social-media age. These are typically the magazines or newspaper supplements that have the listings for what’s on TV over the up-and-coming week and typically live on the coffee table or near the TV so one can make an informed choice about “what’s on telly tonight”. A few recliner armchairs and sofas even have large pockets sewn in to their sides expressly for the purpose of storing the TV guide magazine. Some viewers even use these magazines and look at the critique offered in them to determine what to record on their PVR systems so they can be sure they aren’t missing the good-quality content.

The example here highlights “Radio Times” which is the quintessential TV-guide magazine of the UK and the first of this class of magazine ever published but I would also see it extend to other respected TV-guide magazines and supplements such as those that are part of good broadsheet newspapers. They have detailed reviews and preview commentaries about the shows that are appearing over the coming weeks, usually with the reviews supplied by film and TV-program critics. This is augmented with columns full of commentary about past shows, the people who are behind them whether as acting talent or directing and artistic talent as well as influences that affect the small screen.

The magazines and newspaper supplements augment some of the big sporting or cultural events shown on TV with their supplementary written and photographic coverage and, in some cases, some of these magazines run the awards ceremonies for the TV industry such as the Emmys in America or the Logies in Australia. A few of them even implemented technologies like Panasonic’s bar codes and the Gemstar VCRPlus/VideoPlus/ShowView/G-Code number-codes as a way to simplify the process of programming a video recorder to record TV shows and partnered with the proponents of these systems to put the feature on the map as far as consumers were concerned.

But how could their role be augmented in the online era? For example, they could work with PVR platforms to supply lists of “critiqued content” or “TV highlights” for users to book for recording on these devices. Similarly, they could implement a TV-friendly Web interface and smart-TV front-end so that users can view the magazine’s treatment of the show they just watched or see slideshows and commentaries provided by these magazines on the TV screen. This could tie-in with video-on-demand offerings so that viewers can see pre-recorded interviews and featurettes about their favourite TV content.

These resources would also be needing to cover content offered on video-on-demand services especially as these services are producing their own original content. This is because the on-demand services are fast becoming a “go-to” service for video content especially as younger people are moving away from traditional scheduled TV content. Set-top platforms like Roku that implement PVR-style cross-service content aggregation can also benefit from “critiqued content” lists provided by TV guides.

Here, the goal is to put the resources that the film critics have built up when curating the content for these magazines and supplements and extend it towards on-demand viewing.