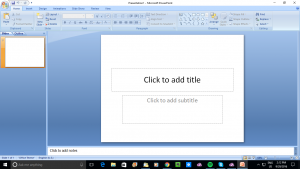 Microsoft PowerPoint can do the job easily for some applications

Previously, I wrote an article about how to use Windows Photo Viewer to show a collection of digital images on the large screen like your projector. Usage classes I was targeting this at included churches and other houses of worship who were showing digital images from the mission field, businesses with a lot of new products to show, people going through a large collection of newly-taken images and the like.

But you think about whether the dedicated presentation or playout program like PowerPoint, EasiSlides or Screen Monkey does the job better in this situation compared to something like Windows Photo Viewer. 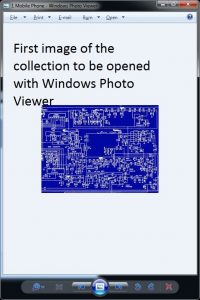 But Windows Photo Viewer would come in handy where you are dealing with a collection of many digital images that you took with the digital camera but want to show on the screen. A good rule of thumb to work with may be at least 11, perhaps 24 to 36 images which was the equivalent of the number of slides that could fit in the slide boxes that mounted 35mm slides came in after the film was processed. Here, you would be wanting to show those images in a manner equivalent to the old-time slide show, showing them in a sequence that matches the flow of your presentation.

Here, different programs can answer different needs and this is more true when you are dealing with presentation or AV playout needs in your small business or community organisation. 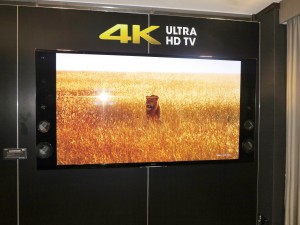 This situation can apply to a range of use cases such as:

You may think that your presentation, AV-playout, worship-lyrics-projection or similar software may do the job for you but this will typically involve copying or importing each and every photo to a presentation and creating a presentation file which can be very inefficient. This is more so if you have had the images properly edited and sequenced so they are in a ready-to-show manner on another computer, then transferred them to the computer you are showing them with using some form of removeable media.

Similarly, you may be going through the pictures that you just took with your digital camera then imported to your computer and want to use the large screen such as your home or hotel-room TV so you can assess them more critically.

What do you need to be sure of 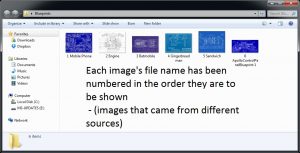 The pictures, which are of a bitmap format that your computer’s  operating system can handle directly like JPEG or PNG, need to be kept in a known folder anywhere on your computer’s file system. This means that they can exist on your computer’s hard disk, on an optical disc that you or someone else “burned”, on a USB memory stick or an SD card such as what you took out of your camera. In some cases, it can also extend to online storage services if they are in sync and you are using native software to integrate them as part of the file system. As well, this may apply to your camera or smartphone if you have “tethered” it to the computer using a USB cable and it works to PTP requirements. 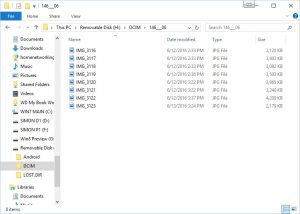 The pictures will also be in a known numerical sequence. If they came off a digital camera or mobile phone, they will have a file name with a number that increases with every shutter-click. If you have edited them or had images from other sources, you will most likely make sure they are numbered to reflect the order in which they are shown as highlighted in the illustration.

Here, you use Windows Photo Viewer which comes standard with Windows from version 7 onwards. This program can run a slide show based on image files without taking up too much computer resources/

Once you know how to quickly run a slide show with a pre-edited collection of images and using software that doesn’t require you to “prepare” them for showing, you can make use of the large screen more easily to show those photos.

This article will be updated as I gain more knowledge on how to use other cost-effective or supplied software in other platforms to quickly show a bunch of image files on the large screen without having to prepare a presentation.