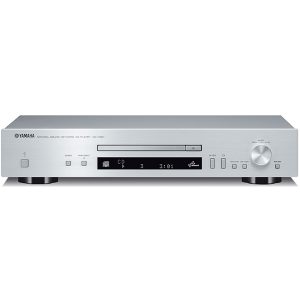 I have been keeping an eye on and given space on this site to the Yamaha CD-N500 which is a CD player that also doubles as a network audio adaptor and is a device I have called out for those of us who want to add CD playback and network media playback to our favourite hi-fi systems.

But Yamaha have also supplemented this player with the CD-N301 which is offered at a cheaper price than the CD-N500. It is also offered in a variant that has a black finish that would go along with hi-fi racks that had that same finish.

Both this player and its older brother, the CD-N500, connect to your amplifier or receiver via a line-level analogue input, occupying just one input on your amplifier’s source selector. But if you have a digital-analogue converter, home-theatre receiver or digital amplifier, these units also provide an SP/DIF PCM digital output via an optical or RCA coaxial connection. They connect to your home network using the tried and trusted Ethernet connection which also allows for you to use a HomePlug AV adaptor if your house isn’t wired for Ethernet or your router isn’t near your hi-fi system.

They also can pull in file-based audio content from a NAS according to DLNA 1.5 specifications or can stream Internet radio courtesy of the vTuner broadcast-stream directory. The file-based audio content can be handled all the way to “master-grade” quality (24-bit 96kHz WAV or FLAC files). If you run iTunes on your Mac or Windows computer or use an iOS device or recently-built Macintosh with recent version (Mountain Lion or newer) of the MacOS operating system, both these players support Apple’s AirPlay network-audio-streaming protocol.

The CD-N301 is based on newer construction but is what I would describe as being “Wi-Fi ready” where you can connect it to a Wi-Fi wireless-network segment of the home-network kind if you use an optional wireless-network adaptor module. There is also inherent software-level support for Spotify Connect and Pandora along with support for vTuner Internet radio and content held on your DLNA-capable NAS.

But it doesn’t have the USB connection for audio playback from USB storage devices or iOS devices. This may not be an issue if your network-based music exists mainly on a DLNA-capable NAS or an online service.

Yamaha shows again that a network-capable audio CD player does exist as a viable option for those wishing to upgrade or replace their existing CD player and add network-audio playback to their hi-fi system. Similarly they also see these players earning their keep for those of us wanting to add CD and network-audio playback to an existing hi-fi system at the same time.