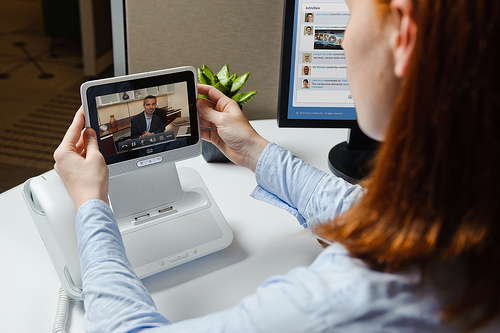 There have been a few features that impressed me about the Cisco Cius Android tablet judging from the news articles that I have read. One was that the tablet was able to work as a fully-fledged Android tablet with access to the Android Marketplace in a manner that makes it compete with the Apple iPad. The other one was that Cisco had taken a different market – the business user – and used the Android platform to make a tablet-style computer that fits the market.

This has then allowed Cisco to develop a hardware product that can offer the necessary functionality by adding on microphones, video cameras, an interface to a speakerphone / handset dock amongst other things. They could easily take this unit further with concepts like the “next-generation home phone” or simply make a competing tablet MID based on Android under the Linksys consumer brand.

This can also lead to a Cius tablet having a longer service life beyond the business because of its ability to benefit from the Android Marketplace which could yield many consumer-focused applications like Android ports of applications like Skype or may iPhone apps.