I am reviewing the Brother PJ-773 PocketJet wireless mobile thermal printer which is a highly-compact wireless-network-capable mobile printer. It is also the first mobile printer that I have reviewed that can work with a Wi-Fi network rather than having to be connected to the host computer for it to work. There wasn’t even a need for me to install or plug in a network adaptor for this functionality to come about.

This mobile printer implements direct-thermal printing technology that was initially used by fax machines to turn out incoming faxes. But Brother has rebuilt their faith in this technology for on-the-road transactional printing by using thermal-printing paper that is better than those rolls of thermal paper used with those fax machines.

The Brother PJ-773 Pocket-Jet wireless mobile thermal printer is based on direct-thermal printing technology which was first implemented in a mobile-printing scenario by Pentax when they released the PocketJet mobile printer in the early 1990s as laptops were becoming more common. Here, this printer used the typical fax paper which was ubiquitous then as its printing medium while being a compact printing device.

Here, this printer is slightly wider than the narrow edge of an A4 or Letter sheet of paper but as thick as a bar of Toblerone chocolate. This means that you could easily stash it in your laptop bag without it taking up much room. 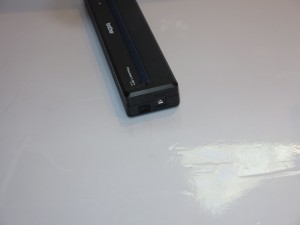 USB and power sockets on the right side of the printer

The Brother PJ-773 printer is capable of operating on a lithium-ion battery pack or on an external power supply which would be the supplied AC adaptor. But you can purchase through Brother one of two DC adaptors that allow you to use it in your vehicle – one that plugs in to the vehicle’s cigar-lighter socket and one that is capable of being directly wired to the vehicle’s electrical-accessories wiring.

I have set up the Brother PJ-773 thermal mobile printer with my regular Windows computer and used software that was downloaded from Brother’s Website rather than the CD-supplied software. This software worked properly first time and found the printer over the USB connection.

The Brother PJ-773 printer is capable of being set up to work with a Wi-Fi network. This means that it can either work as its own Wi-Fi access point or it can be part of a small Wi-Fi network or a large enterprise-grade Wi-Fi network. It also is future-proof where you can use the printer with an IPv6 network which is becoming the way to go.

You have to configure it for your network by connecting it to a regular Windows or Macintosh computer via USB and running the USB Device Settings Tool program. The only exception is if you are connecting the printer to a Wi-Fi router or access point that uses WPS “push-to-connect” setup where you hold down the Wi-Fi button on the printer for 5 seconds to instigate this setup routine at the printer.

This also applies if you wish to switch your Brother PJ-773 printer between using an existing Wi-Fi network or creating its own Wi-Fi network. Here, you have to determine whether to use “Wireless Direct” for the printer to be its own access point or “Infrastructure” for it to be a part of an existing network. 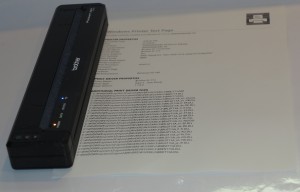 Slightly smaller than the A4 printed page that it turns out

The Brother PJ-773 had worked properly with Windows 10 and with Android using both the Mopria printing abilities and the Brother iPront&Scan printing app. The latter situation may not work properly if you are using the Wireless Direct printing setup because the Android iPront&Scan software is dependent on an Internet connection for rasterising the documents for printing.

If you want to see the document come out more sharply, you may have to increase the density settings in the driver or app to see something darker.

I completed a document-copy test involving a multifunction printer to see how documents would turn out when copied using one of these printers. This included whether the thermal paper used for this printer would misfeed through an automatic document feeder which is common with multifunction printers offered to the business market. The reason I performed thsi test is because one could copy or scan a “print-and-sign” document as part of their workflow, such as to scan an invoice or repair quote for tax or insurance purposes; and is being underscored by the common “print, sign, scan, email” workflow underscored with the Internet and email.

Here,  I used the previously-reviewed Brother MFC-J5720DW business multi-function inkjet printer to perform these tests and printed the document using default settings for the PJ-773 and copied it using the default settings for the MFC-J5720DW. The thermal-paper original passed through the automatic document feeder on the multifunction without any problems while I found that a standard text document could copy properly on default settings. With some documents, you may have to increase the copy density on the MFC or copier if they come out a bit pale.

The Brother PJ-773 Wireless Mobile Thermal Printer could benefit from improvements as far as Wi-Fi setup is concerned.

Firstly, it could benefit from a hardware switch on the printer itself that allows you to select between Infrastructure or Wireless-Direct operation so you can have it work with an existing wireless network or as its own network without having to go through the rigmarole of connecting it to a regular computer via USB and running a configuration app to perform this switchover.

As well, it could support a “wireless repeater” mode like some mobile NAS units such as the WD MyPassport Wireless mobile NAS so you can have access to an Internet-supporting Wi-Fi network and the printer’s access point network at the same time. For setup in Wireless Direct mode, the Brother PJ-773 could implement WPS-PBC “push-to-connect” as a way of establishing a connection between it and a Windows or Android client device.

Brother could improve on the Pocket Jet direct-thermal printing platform by supporting duplex printing with suitable double-sided paper. This can appeal to applications where you need to turn out a 2-page document without needing to feed through two sheets of paper.

I find that the Brother PJ-773 Wireless Mobile Thermal Printer earns its keep with basic “on-the-road” transactional printing from both regular computers and mobile devices. This is more so if you are turning out a receipt, invoice or similar document which only covers up to two A4 or letter pages. You may have to use the paper-roll kit of you expect to torn out a document with many pages at a time.

For best results, I would recommend thay you run the printer with the image density setting on 6 or 8. Here, you can have documents that last a long time and can be copied easily on most multi-function printers without any need to configure them. You could use the premium “20-year” paper to turn out legal-requirement documents such as safety and compliance certificates associated with installation work, or for tax invoices in those jurisdictions where you have to keep tax documents for over five years.

Similarly, it may be worth bargaining in the cut-sheet paper guide if you expect to use your Brother PJ-773 to frequently print multi-page documents. Buying the ruggedised carry case with integrated roll-paper holder may make for a practical no-fuss “ready-to-print” option for your briefcase.

On the other hand, you may have to use a Canon or HP mobile inkjet printer if you are expecting to turn out many pages at a time and place emphasis on on-demand colour or greyscale printing such as printing of photos, or you value a choice of media for “on-the-road” applications.

Therefore I would consider the Brother PJ-773 Wireless Mobile Thermal Printer as a tool for tradesmen and other mobile workers to have in their mobile office.