The Lenovo keeps the same look for the ThinkPad laptops

There is something about classic industrial design that never dies. This has been augmented by a lot of items like the Mini, the Fiat 500, the AGA cooker, the Wurlitzer 1015 juke box amongst other things. These examples have been evolved and reworked over longer times with newer technological improvements but have maintained their shape.

Now the IBM ThinkPad has entered this line of classic designs. Here, it was about the black housing, the blue ENTER key, the red thumbstick to move the pointer around and the 7-row keyboard. These computers became a statement for what is expected of the corporate laptop that carries through the business sense of an office in New York or Chicago..

This has been carried through even when IBM sold their personal-computing business to Lenovo as part of their computing-hardware-business divestment effort and has been shown as a way to convey the bloodline that is underscored by the ThinkPad name. 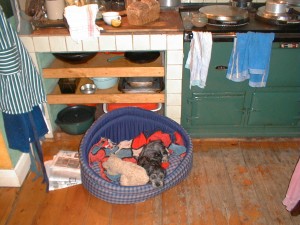 A very strong analogy that comes to my mind is the AGA cooker which for many decades kept a particular design but had  many technical improvements such as being able to use oil, gas or electricity as a fuel or work under timer control. There were still the two hotplates with the distinct insulated metal lids sitting on the black top and two or four ovens with the distinctly-shaped insulated doors, the chrome towel rail on the top front edge (with many tea-towels hanging on it) and the thermometer above the top oven door. The AGA stove still carried through the homely feel in the kitchen, consistently warm and comfortable and has often been associated with the British farm houses and cottages and the cosy lifestyle endemic to them.

One of the machines that was being celebrated and is being considered by Lenovo for a “One More Time” treatment is the highly-portable IBM ThinkPad 700c which was issued in 1992. I use the expression “One More Time” to allude to what Wurlitzer had done with the 1015 jukebox. The original design could only make 10 78-rpm records for play through its valve amplifier. But Wurlitzer issued a newer machine with the same arch shape and decorations as the original unit, but was able to have 50 45-rpm records available to play via a solid-state amplifier and used microprocessor technology to fetch the records to be played. This newer model was called the 1015 “One More Time” to reference the preservation of the same industrial design but having newer improvemts.

The IBM ThinkPad 700c had a “cigar-box” look with the black housing, the red thumbstick and the distinct keyboard layout. But it had a 4:3 display that had a resolution low by today’s standards along with the processor power, memory and storage that was okay to 1992 standards for a secondary machine. It also had a 3.5” floppy-disk drive as its removeable storage. Here, they would revise this computer with a 16:9 widescreen display with Full-HD resolution at least, a few USB 3.0 ports as the main connectivity option, current-spec horsepower like Intel Core M or i-Series processors, 4Gb RAM and 128Gb SSD secondary storage at least, and more to suit today’s expectations.

What I like of this idea put up in Lenovo’s blog is to revisit a classic design and look at how it can be made relevant to today’s requirements rather than tossing it away.