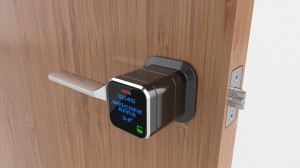 Most of the “smart-locks” that work with your smartphone, home-automation setup or home network, and are being pitched through the technology press come in the “bore-through” cylindrical deadbolt form. This style of lock typically has the cylinders (in a double-cylinder setup) or outside cylinder and inside turn-knob integrated in a tapered housing with a deadbolt coming out from the door’s edge.

Some of these “smart-locks” are “new-install” types that either are to replace an existing deadbolt and make its keys redundant where as some come as a retrofit kit that is installed in lieu of the turn-knob on an existing single-cylinder deadbolt without making its keys redundant. This is most likely because this form-factor is very popular in North America as a residential front-door lock and most of these “smart-lock” products are designed in that area.

At last someone has offered a highly-capable “smart-lock” that is in a different form-factor i.e. a “key-in-lever” lockset that is intended to replace the main door latch. Locks based on the form factor typically had a locking mechanism integrated in to a door-latch mechanism, typically with a “push-to-lock” button or thumb-turn and access from the outside via a key cylinder integrated in the outside knob or handle.

Here, the Genie Smart Lock works like these “key-in-knob” units but allows you to unlock the door either with your smartphone running a Genie-supplied app, a Bluetooth key fob or the traditional metal key. This setup is installed in that same “bore-through” manner as what is expected for most residential door hardware in America and some other countries. For some people, the usage experience may be very close to the card-driven lock on their room door when they stay at their favourite hotel.

This smart lock will offer the typical “asked-for” functionality with access logging, integration with smartphones and the Wi-FI home network, and the ability to “send” keys to others. But it even runs rings around most other residential and commercial access control setups by providing a display on the front surface that shows more than “success” or “failure” information. Here, this unit shows the current time and temperature and the name of the user who just unlocked that device. Personally I see this feature as an opening for a programmable text or graphics display on these units such “special-occasion-text” or “reminder-text” applications.

What I see of the Genie Smart Lock is a device that brings uncharted territory to the smart-lock device class, whether reaching to another common form factor or adding a programmable display to these devices. But do I still see the smart door lock still become the “tech-head’s” door-accessory-to-have rather than something that most of us can accept as part of the home?