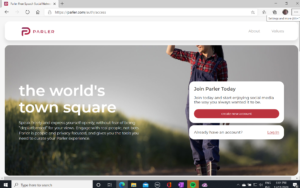 A new breed of social networks are becoming popular with user groups who see Facehook, Twitter, YouTube and co as being equivalent to mainstream media, especially the popular TV channels.

These networks are based in North America, yet outside Silicon Valley. This means that they don’t subscribe to the perceived groupthink associated with Silicon Valley / Northern Californian culture.

As well, they came to the fore in response to Facebook, Twitter and Google responding to the issues of fake news and disinformation with these online companies implementing fact-checking mechanisms and flagging questionable material. Let’s not forget that there is social and business pressure on the established social media companies to clamp down on racial and similar hatred. That meant they had to implement robust user and content management policies to manage what appeared on these sites which is something that can be very difficult with large networks.

Previously the only way to offer content that isn’t controlled by the social media establishment was to set up and run a blog or forum. This required a fair bit of technical knowhow and you had to also have a domain name and a business relationship with a Web hosting service. Then you would have to run something like WordPress, phpBB or vBulletin so you can concentrate on running the blog or forum.

It also included exposing your content amongst your desired audience which may require you to use established social networks but use codified dog-whistle language in your posts. As well, you would have to make sure that your presence on the established social networks exists simply to draw traffic to your site. To “make it pay”, you would have to set up a shopfront on the Website to sell merchandise, offer advertising space typically to small businesses, or even run the site on a freemium model with a subscription-driven membership system.

The networks are Parler and MeWe which also have iOS and Android native clients available through Apple’s and Google’s mobile app stores. Gab also exists but Apple and Google won’t admit native clients for this service to their app stores. Rumble offers a video-focused service that works similarly to YouTube, with this service being cross-promoted on Parler, MeWe and Gab.

These alternative social networks implement business models that are less dependent on advertising like subscription-driven “freemium” setups. Along with that, the networks adopt “light-touch” policies regarding the management of users and the content they share, with them billing themselves as “free-speech” alternatives.

There has been strong interest in these networks over the past year which has been highlighted in the number of accounts created and the number of native mobile clients downloaded from the mobile-platform app stores. This is due to the USA’s knife-edge Presidential election and the COVID-19 coronavirus plague and there are some people wanting to seek out information that isn’t “fit for television” i.e. accepted by traditional media and the main Silicon Valley social networks.

Unlike previous alternative-media setups like community broadcasting, small-scale newspapers, computer bulletin boards and the early days of the Internet, these networks are gaining a strong following amongst the hard right including conspiracy theorists and Trump loyalists. There is even interest amongst the USA’s Republican Party to shift towards these services as a way to move from what they see as the “left-leaning media establishment”, something that is symptomatic of how hyper-partisan the US has become.

A question that will be raised is how large these networks’ user bases will be in a few years’ time after the dust settles on Donald Trump and the COVID-19 pandemic. But I see them and newer alternative social networks maintaining their position especially for those who relate with others that have opinions or follow topics that are “against the grain”.