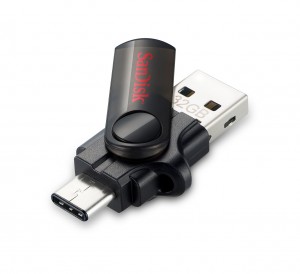 has been ratified as a small reversible connector for use with low-profile devices. It will start to appear primarily on the next wave of tablets, smartphones and, perhaps, ultraportable notebooks due to its small size.

But the device that ends up in most USB ports is the USB memory key, also known as a memory stick, thumb drive or jump drive. These are the same size as a typical house key or stick of chewing gum but contain an integrated flash drive that plugs in to a computer’s USB port, presenting itself to the operating system as a removeable disk.

SanDisk has anticipated the arrival of these devices and has launched at Mobile World Congress 2015 a USB memory key that can plug in to a USB Type-C socket. The 32Gb Dual Drive has on one end a Type A plug to plug in to most computers in operation and on the other end a Type C plug for the up-and-coming tablet or ultraportable. Of course, the USB 3.0 device will present itself logically as a removable disk like other memory keys.

This could cut out the need to carry around a Type-A to Type-C cable along with a memory key when you want to move data to your tablet or want to expand capacity on that same device. Who knows who will be the next kid off  the block to offer a peripheral for the USB Type-C connector.