Rovi’s own page about their automotive network solutions

My comments on this topic 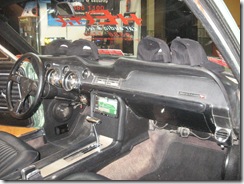 What Rovi is doing is integrating the vehicle in to the home network and its content pool. This will, as far as car entertainment companies are concerned, legitimise the feasibility of a hard disk / solid-state drive and/or WiFi network connection in the car AV system.

Content-description metadata would be available for CDs, DVDs and Blu-Ray discs in a manner similar to the current practice with iTunes or Windows Media Player. This can also work well with setups that have a built-in hard disk and a “rip-to-hard-disk” function for CDs. This can be updated with new data over the network connection or with the user transferring data from their PC using removeable media.

There would also be the ability to have improved content lookup available for applications where the media is stored as files in a file system like in an SD card, USB memory key, mobile phone or MP3 player like the Apple iPod.

Another key feature that Rovi has established in the press collateral has been the concept of transferring and syncing media content between the vehicle and a media collection hosted on a DLNA media server. This again would work with a 2.5” hard disk that is located in the car and used as the data storage.

There is even the concept of sharing data held in the vehicle or devices plugged in to the vehicle with associated networks which could allow for such things as map updating for satellite navigation and, I may have said this before, collection of diagnostic information from the vehicle.

Where do I think this will exist

The concept will typically appear initially as equipment installed at the factory in high-end cars and / or as high-end aftermarket car AV equipment that appeal to young men who turn their highly-customsied cars into “mobile discos”.Also these kind of markets are based around people who are usually more willing to spend big on the new technologies.

The primary form factor for aftermarket deployment may typically be in the form of the 2-DIN car navigation/audio/video head-unit with a large touchscreen on the front. It is because these head-units will typically have room for an integrated hard disk alongside a CD drive.

Some manufacturers may move towards moving the hard disk out of the head unit so as to reduce costs or design equipment that fits in to a 1-DIN car accessory space. This will typically allow for a USB or eSATA hard disk in an enclosure with an automotive-rated power supply located somewhere in the dash. On the other hand, highly-compact SSDs could become part of 1-DIN head-units which become part of the home network.

The network connectivity issue may be worked out either with an integrated WiFi-Bluetooth radio platform in the head unit or a WiFi network adaptor on the end of a USB cable or WiFi-Ethernet bridge on the end of an Ethernet cable located near the windscreen (windshield) or the rear window.

Once Rovi have established this technology, it could mean that the car will exist as part of the home entertainment and information network.

The traditional landline telephone is still trying to be relevant

32GB MicroSDHC card from SanDisk – What could this provide