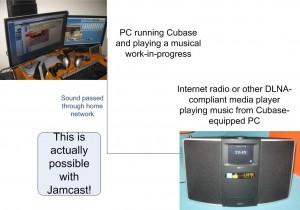 Previously, there have been some computer sound-reproduction setups which comprise a special “virtual-soundcard” program that is running on a computer and transmitting the data via a local-area network to a “network audio adaptor” connected to a sound system. The solutions, which came in the form of the Linksys WMB54G Wireless-G Music Bridge (Wi-Fi 802.11g solution) and the Devolo dLAN Audio Extender (HomePlug solution), capitalised on the idea of moving your computer’s sound to better speakers hooked up to a better amplifier that is part of your main music system. But these all required their own particular driver software for them to work properly.

Now Jamcast have come up with a UPnP AV / DLNA Media Server program that runs on the Windows platform which works in the same vein as these previous devices. But it has another trick up its sleeve beyond just being a regular media server. It can work with the UPnP AV / DLNA compatible media playback device as a “virtual soundcard” like these other devices that I had mentioned previously.

There may be some caveats with this kind of setup at the moment such as latency issues concerning game sounds or the ability to provide a discrete surround-sound feed to a surround-capable receiver. From what I hear of the discussion boards at Jamcast’s site, there were issues with “forcing” MP3 output to particular DLNA devices so that they pick up a recognised codec rather than FLAC. Another questions is whether you can have the virtual soundcard being fed wit the same audio stream as the computer’s local sound subsystem and if there is any latency issues with this setup.

Another idea that could be looked at as far as further development work goes would be to port the software over to the Apple Macintosh platform in order to open up that platform to more UPnP AV / DLNA server solutions.

This may yield further applications like use of audio content on a laptop via a sound system that is connected to a DLNA audio device to use with audio services that only work with PC-based software. A good idea for Jamcast to explore would be a “slimmed-down” version of this virtual-soundcard software that can be licensed out to other software developers to make use of DLNA devices as a “virtual sound card”. An example that could come in to its own are the party-hire jukeboxes like the SuperJuke that people hire for major birthday parties and similar events. Here, the music feed from these machines could be fed to DLNA-enabled endpoints on a home network as well as the machine’s local speakers.

What I am pleased about with this is that the UPnP AV / DLNA standards are being taken further to build more innovative hardware and software for the home or small-business network.