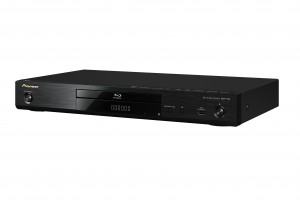 The Pioneer BD-160 network-capable Blu-Ray player may be your ordinary mid-tier component Blu-Ray player with full DLNA and YouTube functionality. As well, it doesn’t have the full makeup of services like catch-up TV or video-on-demand which may limit its use as a “smart TV enabler” for existing TVs.

But, as well as being fully equipped with integrated Wi-Fi, the Pioneer BDP-160 is one of the first of these component-type / add-on players that implements Wi-Fi Direct which creates its own Wi-Fi network for use with smartphones and similar devices. This means that you don’t necessarily have to have the player and phone being part of your home network or deploy a Wi-Fi router for standalone use to “throw” images, music and video to the big screen or speakers if the content just resides on the mobile device.  This may not be possible if you are using another device like a NAS as a content server while managing the show with a DLNA control point or Pioneer’s control app on a mobile device. Oh yeah, it is equipped with the Ethernet connectivity so you can benefit from reliable video-streaming operation with your Ethernet or HomePlug AV wired backbone.

Like most video-focused network media devices, this Blu-Ray player requires use of the TV to play audio content but you could use Pioneer’s control apps for iOS and Android devices to control audio playback from the content pools that exist on your DLNA-capable NAS or your smartphone.

The Wi-Fi Direct functionality could easily be augmented with Miracast and WiDi to allow you to use this Blu-Ray player as a display “bridge” between your laptop or mobile device. If this is added, it could play in to the hands of small businesses and organisations who make use of consumer electronics to satisfy their AV needs. But DLNA can do this task if you are “throwing” digital images or video clips to the big screen. As for reasonably-priced projectors to use with this player, who knows when we could see one of these come with proper HDMI ability.

At least Pioneer is showing us that they can make a Blu-Ray player that works as an add-on network media player for the setups where you don’t want to integrate it as part of the established network.