On Thursday and Friday this past week, I had visited the Connect 2014 technology convention as an expo visitor mainly to observe key trends affecting business and personal computing that were surfacing over the past few years.

A few companies had shown some IP-based telephony systems at Connect 2014. This is due to telephony moving from the traditional circuit between the local exchange (central office) and the customer’s premises towards Internet-based packet-driven end-to-end connectivity. The trend is being assisted by the goal for reduced operating costs, increased competition in the telephony space and the move towards next-generation broadband infrastructure. It is also being assisted by the prevalence of various “over-the-top” IP telephony programs for mobile devices like Skype and Viber.

One company even showed a desktop IP videophones with wired handsets along with  IP DECT cordless-phone bases. I even raised the issue of integrating Skype in these videophones because this is seen as the preferred “consumer, small-business and community-organisation” video telephony solution. One path that organisations would have to use is an IP PBX server with a Skype video “trunk” which likes Skype to the videophones. On the other hand, he showed me one of the desk videophones which had an app platform of some sort and mentioned that a Skype front-end could be deployed in these units.

Mobile-device computing in the workplace

A key workplace computing trend is to implement mobile computing devices like smartphones and tablets. This can be as a fleet of equipment owned by the organisation or a “bring-your-own-device” model where employees bring their own devices to the workplace and use them for their job. Here, they may be seen as supplanting regular desktop and laptop computers or serving as a highly-portable adjunct to the regular computers.

If these devices were used in the workplace, they would either work with document-viewing and communications tools, and a Web browser to support office tasks typically performed on a regular computer. On the other hand, they would ether work with a purpose-built device-side app or a Web front (task-specific Web page) as part of a business-specific workflow or system.

A few companies were showcasing mobile-device management systems, typically pitched at large corporate and government customers. These worked on a platform-independent manner yet allowed data security whether by implementing a managed “business realm” and “business app store” on a BYOD device or providing a highly-locked-down device.

BlackBerry have set up presence at Connect 2014 in order to show that they are moving from a hardware-based operation to something that is more software-based. This means that they can provide managed mobile computing to all of the platforms such as iOS, Android and Windows and covering all management arrangements ranging from a totally managed and locked-down fleet to a BYOD setup with a managed “business space” on the employee’s device.

In my conversation with a BlackBerry representative, I raised the issue of small businesses and community organisations neither knowing nor defining their intellectual property. We were raising the issue in relationship to these organisations neither being careful or wise about their data security nor being interested in corporate-grade information-security products and services. He stated it in a simple way as being whatever information places your organisation at risk if it falls in to the wrong hands.

A lot of these systems don’t embrace what I covered in the last paragraph because they are pitched at a larger business with its own IT department and significantly-sized server equipment. An effort that I would like to see achieved is the development of “small-business” variations that can run on a hosted cloud service or on-premises using modest equipment like “business-in-a-box” servers or classic “tower-style” server PCs. They would also have to implement a user interface that simplifies this kind of management for a small-business owner. 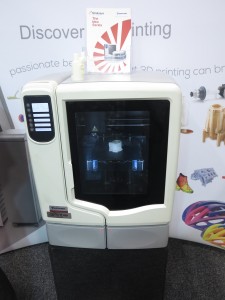 A technology that has been given a fair bit of Web coverage of late is 3D printing. This is where a single-piece object is constructed using a special machine that builds up that object in layers. An analogy of this is the “3D Jigsaw” which had cardboard pieces that were stacked in a particular way to become a known object, typically a figurine.

There were a few companies who were presenting 3D printers that were in action turning out various pieces. One of these machines, which was a freestanding one the same size as those larger gas barbecues that have adorned may Aussie backyards, is able to “paint” colour on to a piece it is printing using an inkjet system. Another machine, this time about the size of a small fridge, used a heated environment to improve accuracy and reliability.

I had a conversation with a representative of one of the companies who do 3D printing and he and I reckoned that the technology would suit a wide range of short-order fabrication jobs. One application I was even thinking of was the ability to reconstruct a replacement part even though the part is no longer manufactured in quantity. One example that came to mind was a mechanism that has a highly-worn or damaged component that needs to be replaced, something encountered by people who are restoring late-20th-century consumer electronics, especially record players, tape recorders and the like, as a hobby. Here, he could scan the component using a 3D scanner and effectively “re-design” that component to what it was like when new, then make it with the 3D printer for reinstallation in that mechanical subsystem.

Similarly, the car-restoration scene could benefit from 3D printing at least when it comes to re-constituting vehicle detail-work such as marque badges and hood ornaments which have been often damaged or stolen from vehicles. This could allow a vehicle owner to make sure their pride and joy is still complete even if any of the detail-work went missing.

It was often said that the connected home concept was “nearly there but not complete”. The problems hightlghted here were lack of a desire by industry to implement application-level standards for home-automation setups. This is manifesting in the form of manufacturers developing their own control apps for mobile platforms, making it harder for customers to use competing “smart devices” at the one location or establish task-appropriate control setups in a “smart-home” environment.

Both these situations effectively have the manufacturers, content producers and other companies effectively owning the consumers and stifling innovation and competition in the connected-home space. 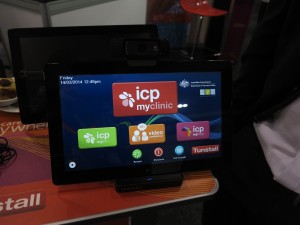 A tablet used as part of an in-home telemedicine setup

One concept that was being shown at Connect 2014 was in-home telemedicine, known also as in-home telehealth or simply as telecare. This is something I have covered in this Website in relation to standing for access to proper broadband in rural and peri-urban communities. Here, this technology allows people in these sparse communities access to continual specialist medical care without the need for the patient or caregiver to frequently travel between home and larger towns or cities when clinical supervision is needed. 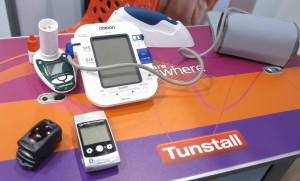 A functioning demonstration setup which is currently used in the field involved the use of medical-parameter sensors like a blood-pressure monitor or pulse oximeter linked to a tablet via Bluetooth with this setup at the patient’s home. This, in turn was linked to the clinic via mobile-broadband technology and the staff at the clinic were able to look at what’s going on using a Web-based dashboard that highlights critical conditions affecting patients in their care. 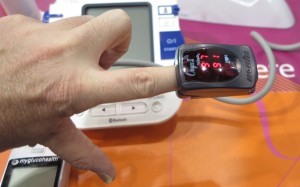 A Bluetooth-connected pulse oximeter in action

It is being pitched at community-care organisations and would typically be seen as being useful for rural applications. But there have been some Melbourne hospitals implementing this as part of a “hospital-at-home” program for managing certain chronic diseases. But there was a setup being shown that allowed this kind of telemedicine setup to work as part of an “independent ageing” setup to assure older people the ability to live independently but know they are still being looked after, which is also being factored as the baby boomers become the ageing population.

These technologies that were presented at Connect 2014 are being more about what the connected work and home life is all about with the current technologies.