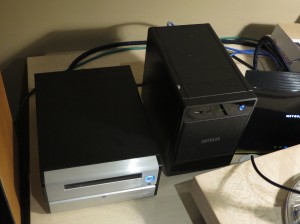 Most consumer and small-business network-attached storage units can serve as a DLNA-compliant network media server for whatever folders you nominate on them. Typically this allows you to have access to whatever multimedia you store on them without you needing to run a desktop or laptop computer to gain access to that media from your smart TV, Blu-Ray player or stereo system.

But not all client devices can handle all the media formats and types that exist on the scene. For example, some of them may not handle QuickTime or Motion JPEG formats that some digital cameras or smartphones tender as formats for their video files. In some cases, not all TVs or video players could handle Full HD video content or some would handle this while struggling. As well, most older and cheaper network-capable audio devices wouldn’t be able to handle 24-bit 96khz audio files which are being considered de rigueur for high-quality high-resolution audio content.

It could be feasible to have a DLNA media server integrated in a NAS perform media-file transcoding to suit the client devices. But this would tax the NAS device’s processor ability when it comes to performance and responsiveness.

What Synology have done is to integrate in to the DS415Play NAS the ability to transcode media files using hardware transcoding. This means that a separate hardware system handles the job of transcoding the media content like what happens in a multimedia-capable computer where the graphics chipset performs any transcoding or rendering for video-editor software running on that computer.

This feature could become important with the availability of “download-to-own” file-based video or high-resolution audio and be seen as part of the feature set for premium-level NAS units. This could then reduce any consumer worries about home AV equipment not supporting particular advanced video formats or the inability to benefit from a “high-resolution” audio album on equipment you use for casual listening like that Internet radio.

It could also encourage the availability of “master-grade” audio and video content in file-based formats for the home network or the ability to gain access to a wider competitive shopfront for file-based image, audio and video content As well NAS units that support content aggregation could also handle transcoding for other NAS units that don’t have this feature which could come in to place in a multi-NAS household.