On Tuesday 29 July, I had attended a Western Digital reseller presentation where WD were premiering their latest additions to the Red Series hard-disk range for NAS units. These are the WD Red Pro series that are pitched at heavy-duty applications centred around the many-bay units that can be mounted in a 19″ standard equipment rack as well as variants of the WD Red range that have 5 Terabyte and 6 Terabyte capacities.

The increasing relevance of the network-attached storage unit 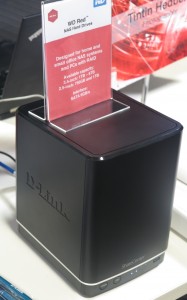 A device that is appearing in more home and small-business networks is the network-attached-storage unit. This is a dedicated unit that shares data held on at least one hard disk across a network.

But increasingly these devices are being able to do more than this due to the vendors marketing their NAS units as a “platform” with a plethora of apps developed or ported by the vendor for these devices. This is augmented by an increasing number of manufacturers who are integrating the kind of processors used in regular-computing or enterprise-grade server applications in these devices, some of which you could describe as being like a compact desktop PC.

They are increasingly relevant in the small-business scene where they can serve as a backup location or central storage for that business’ computers. An increasing number of these units can implement “virtualization” where they can work as one or more different computer systems. As well, platform-based NAS units offer applications like video-surveillance recording, digital signage, and enterprise-grade “advanced-storage” setups like iSCSI or SAN. For that matter, some of the high-end desktop NAS units can be purposed as branch-level “on-ramps” for a full-blown enterprise-wide computing setup. 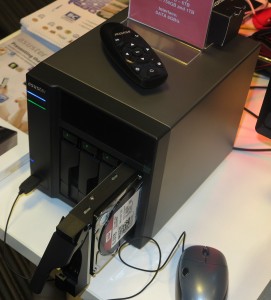 A few creative-skills professionals appeared at this presentation to demonstrate how the NAS fits in to their trade. In most of these cases, these users store only the data they need to work with at a given moment on their iMac’s main hard disk and keep the rest of the data on a NAS. As well, the units even serve as central content libraries for raw material or finished projects. This appeals very strongly to multi-person projects like film and video work where version-control is important.

But, in the home, they are appealing as systems to hold your audio, video or image content and make it available to network-capable AV devices. As well, most NAS vendors are pitching these systems as a “personal cloud” that is an alternative to services like Dropbox or OneDrive. As I have mentioned before, vendors are offering DVR abilities so that customers can connect the NAS to a USB digital-TV tuner module or broadcast-LAN unit to make it become the equivalent of a TiVo. 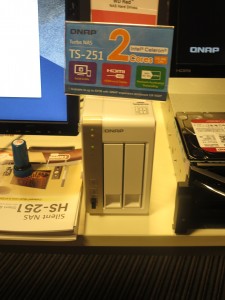 One of WD’s representatives found that there is a problem with selling a NAS in a “big-box” store like Harvey Norman or JB Hi-Fi. Here it is about identifying the value that these devices have for the average “Joe in the suburbs” who is content with using a USB external hard disk as a backup or offload tool for their home computer. Typically the home network is implemented by these users just to facilitate Internet access and, perhaps, share a printer.

What needs to happen to make the NAS appeal to “Joe in the suburbs” is that a NAS makes more sense as an always-available content library or data store, especially if you have or intend to buy another computer, a mobile device like an iPad or network-capable AV equipment including most recent games consoles or smart TVs. A good question to address is the number of digital pictures you take or hours of digital video footage you make and the number of CDs you rip or digital music files you buy from iTunes and similar services and how you can make them available around the home.

As well, one or more legitimate “download-to-own” video-content services that can allow you to store your movies that you downloaded to a NAS can legitimize the value prospect of these devices to “Average Joe”.

What has happened over the last few years is that WD have re-factored their regular-duty computer hard disk lineup in to distinct ranges denoted by colour as shown below: 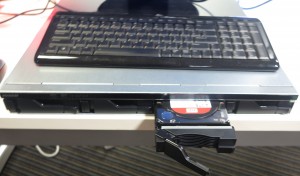 WD were the first company to develop and launch a hard disk that is optimized for the operating conditions that a network-attached storage device will throw at it. Previously, a NAS used regular desktop hard disks as its storage and these disks were seen more as a “jack of all trades, master of none” when it came to network storage requirements.

The key features for this range include: 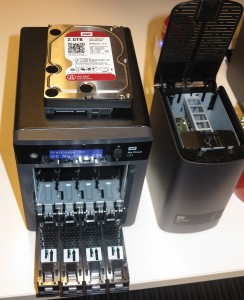 The newly-released 5Tb and 6Tb capacities appeal to all NAS designs in a lot of ways. For example, you could set up a 6Tb single-disk NAS or use two of the 6Tb hard disks in a dual-disk NAS configured for RAID 1 to have a fail-safe 6Tb data volume that can also handle higher data throughputs. You could even run up to 24Tb in a four-bay NAS or 30Tb in a five-bay NAS, including implementing various RAID data-replication setups for fail-safe or high-throughput operation.

Even the way the hard drives are designed have an efficiency and density advantage over the competition. For example, the 6Tb drives maintain 5 platters with 1.2Tb per platter rather than 6 platters with 1Tb per platter. This means that there isn’t much mechanical effort needed on the spindle motor to spin up the disk. As well, the drive housing can fit in to most NAS drive bays without being unnecessarily stout. They also maintain a 64Mb local hardware cache for improved operation efficiency.

This lineup of NAS hard disks is optimized for the rack-mount large-business-class NAS system and is built towards higher performance and reliability in these many-bay systems. These would be able to handle a greater workload, which would be representative of a larger high-traffic business. Some people have put forward questions about using one of these hard disks in a small desktop NAS but it wasn’t found to be worth it for the kind of use that this class of NAS would typically be put to. But on the other hand, I would see them as being of use with the smaller units that serve branch-based “on-ramp” applications for enterprise data infrastructures. 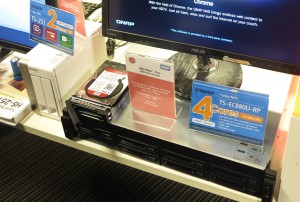 Some questions were raised about implementing WD Purple hard disks in a regular NAS that was running one of the video-surveillance apps offered by the vendor as part of their application platform. The WD presenters recommended that the WD Purple disks go in dedicated DVR equipment that is optimized for the task rather than NAS units running these platform apps. Instead, they recommended the use of WD Red disks in these “NAS+software” setups, more likely because the NAS may be tasked to do other network-storage activities like being “Data Central”.

Can my NAS handle 6-Terabyte disks

A situation that one can easily run into with any computing equipment is that the equipment’s operating system or firmware can impose an arbitrary limit on the size of storage media. Here, if you supply storage media that is greater than this maximum allowed in this software, the software could throw up errors or simply fail because it can’t address all of the storage media’s useable capacity. This problem shows up when storage-media manufacturers release higher-capacity media after the software was “set in stone”.

For example, the older versions of MS-DOS and some other desktop operating systems couldn’t handle large capacity hard disks as a single logical volume. So computer users had to partition larger-capacity hard disks in to multiple logical volumes in order to make use of this space. As well, I had used an older digital camera that worked with SmartMemory cards and couldn’t use newer higher capacities of these cards. Here, I had to look around for cards of a particular capacity to keep as “spare film” for the camera.

Most of the NAS platforms can support this capacity out of the box or may require you to wait on an interim update for the new capacities to be supported. WD have provided a compatibility list which allows you to find what of the WD Red range can be supported by your NAS box. This includes issues like maximum capacities that these systems have. It is also worth checking on the vendor’s Web site for newer or impending software updates.

If you are thinking of buying an enclosure-only NAS or “upsizing” your existing NAS, you can head towards the newer 5Tb or 6Tb disks that WD offers for increased capacity. As well, your heavy-duty many-bay business-grade NAS can be treated to the WD Red Pro disks that are appropriate to its usage nature and performance level.