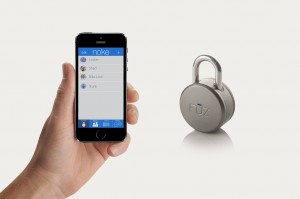 Noke padlock controlled by a smartphone

The smart-lock now arrives in another form-factor. This time, it is the padlock which is seen typically as a secondary or auxiliary locking device that ends up on the gate, cupboard door or to tether a bike to a lamp post. 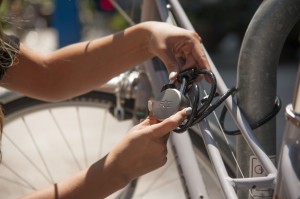 Useful on a bike here

Here, Fuz Designs have put forward an operational prototype of the Noke padlock that works in a similar vein to the Kwikset Kevo deadbolt. This is where the lock interacts with a digital “key-ring” that is kept on your smartphone to verify that it’s the correct person who is using the device. Both these devices achieve this interaction using the Bluetooth Smart or Bluetooth LE technology but they also require you to directly interact with the device before they will open.

In the case of the Noke, which looks like most of the dial-type combination padlocks or some high-end key-driven padlocks, you squeeze on the shackle to release the device once it is verified using your “digital key-ring” in your smartphone. This is similar to touching the bezel on the Kwikset Kevo to unlock the door.

The Noke has the typical smart-lock expectations like the ability to create extra keyholders and share these keys to other peoples’ smartphones, including creating “one-shot” keys which are only used once. This also has logging abilities so you can know who opened the lock when. 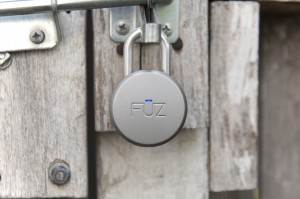 This doesn’t look out of place on that gate

The app for this lock has been ported to both the iOS and Android operating systems but would work with devices that have integrated Bluetooth 4.0 abilities and run iOS 7.0, Android 4.3 Jelly Bean or newer iterations of these operating systems.

The lock can run for a year on a single watch battery and has a “phone absent” failover where you press down on the shackle in a particular Morse-code sequence that you determine. As well, it can work with most hasps, padbolts and other padlock-based locking devices but Fuz Designs have also supplied a padlock-storage attachment so you can clip this to your bike when you are on your way.

The Noke Bluetooth padlock can open up a product-development path for solving problems that users may run in to when dealing with padlock-based locking systems such as a lock that was intended for a particular application ending up being used on another application. It can also allow for the much-maligned locking-device class to be integrated in to the Internet Of Everything and tie in with building-automation goals.

Fuz Designs are raising the capital to get this product in to mass production by using the Kickstarter crowdfunding method but who knows whether many will pick up on it at a price that is more expensive than the typical padlock. Here, you would have to stump up at least USD$59 to hook this unit on your shed’s hasp and staple or padbolt and effectively link it to Bluetooth..

What I see of this is that it is a highly adventurous design for bringing the smart-lock concept to another form-factor which is totally driven by price. It can also open up these devices towards an innovation pathway,

The HTML5 vs Flash debate

How to use RSS Webfeeds effectively nowadays