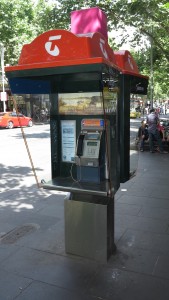 Increasingly public payphones are becoming more irrelevant in today’s mobile-phone society, simply serving as access to telephony for those who can’t get a mobile phone service or as a failover solution if your mobile phone’s battery dies or you run out of uesable credit on a prepaid mobile-telephony service. Other than that, they become a shelter from a sudden downpour or to talk quietly with one another or “fix oneself up quickly”. They are even mentioned in that Men At Work song “Touching The Untouchables” (Spotify link) as a quiet space for the homeless – “Spend My Nights In The Telephone Booth / I Make Sure I Leave The Phone Off The Hook”.

What is happening now is that Telstra and the City Of New York are integrating Wi-FI hotspot finctionality in to the phone booths. Telstra, as Australia’s incumbent telecommunications provider responsible for the universal telephone service, is adding this functionality to its phone booths which have the fully-functional public payphones while the City of New York is replacing existing phone booths with the hotspots. These will offer an IP-based speakerphone function to allow calls across the USA as well as a charging station for smartphones that run out of juice. Their cost will be covered by outdoor advertising that is attached to these booths.

One group that these services will benefit are those of us who are on mean mobile data plans and have to use the public-access Wi-Fi with our smartphones or other mobile devices to apply for a job through an online form or find out material online. With some of us, we have to use Skype or Viber VoIP services to make free calls between correspondents who have the same service on our phones to save money.

This could be seen as a way to help establish a universal Internet service especially if the service provider is involved with using the public payphones as part of their commitment to the universal telephone service.